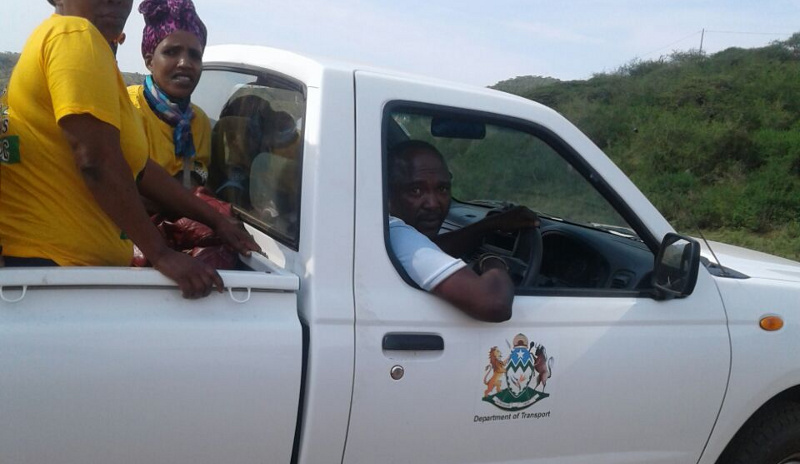 The Inkatha Freedom Party has opened a case against the abuse of state resources by the ANC in Nkandla by-election.

“The IFP is disappointed by the ANC’s blatant abuse of state resources for electioneering in Nkandla. During the by-election in Ward 7 in Nkandla a vehicle from the Provincial Department of Transport (number-plate KZN 12857) was caught red handed transporting ANC supporters during ANC door to door campaign. This continued abuse of state resources is a contravention of the Electoral Code. In spite of this ruling, the ANC blatantly continues to misuse state resources for party-political purposes in its desperate attempt to win elections,” said IFP National Chairperson, Mr Blessed Gwala MPL.

“Today`s event indicated clearly that the ANC is politically bankrupt that they can use state resources to boost their profiles. The IFP calls on the ANC to refrain from abusing state resources.

We have photographic evidence of this vehicle clearly showing its registration numbers and we will provide this evidence to the court to take action against those responsible.

This is not the first time, as it happened in the Sahlumbe area during the by election in January 2016, three vehicles, two from Emnambithi or Ladysmith Municipality and one from Uthukela District Municipality respectively were witnessed having ANC posters on them and transporting voters to and from voting stations. This also happened during the by election in Ward 13 in Ulundi which the IFP won where we found a vehicle from the Premier’s office delivering food parcels. Both these matters were reported to the IEC but not action was taken.

The IFP has also lost confidence to the KZN MEC of Transport, Mxolisi Kaunda that he will investigate this matter diligently as himself is in and out in voting stations during by elections masquerading as state representative. Heads must roll in this matter,” continued Mr Gwala.