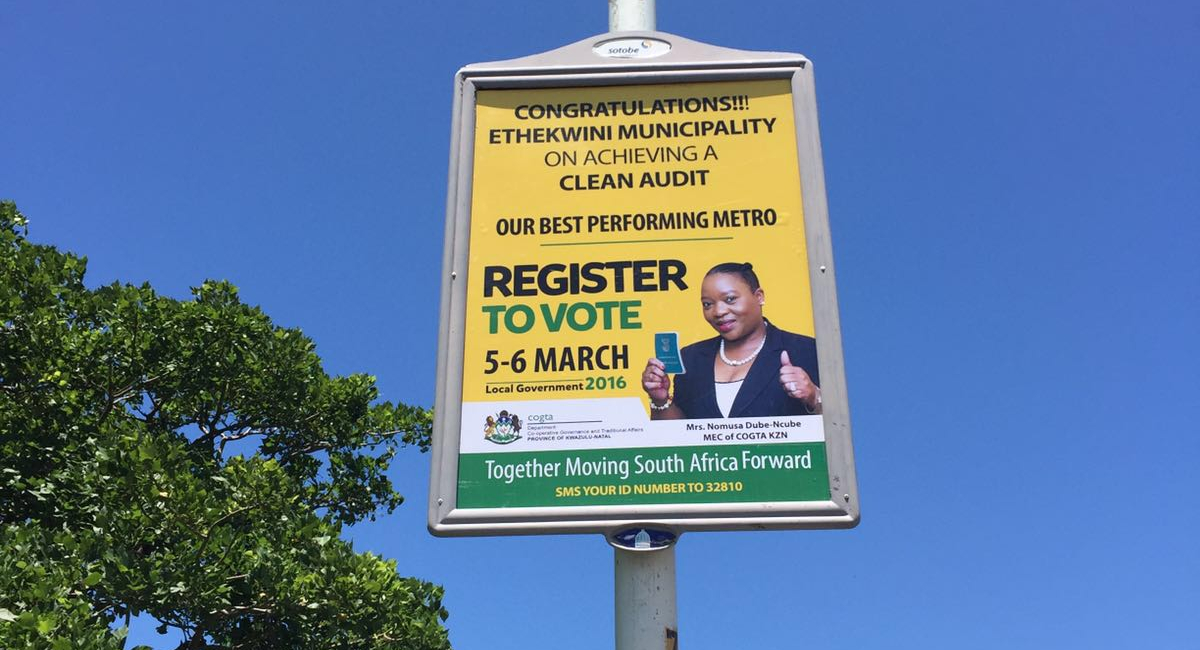 While the IFP has been out in full force this weekend across KwaZulu Natal to urge South Africans to register to vote, it is of great concern that MEC Nomsa Dube-Ncube is seemingly abusing state resources for the ANC’s 2016 local government election campaign.

Across Durban, posters from the ANC-led KwaZulu Natal provincial government are currently on display, on every lamppost, urging citizens to register to vote. These posters are however in ANC colours and contains an ANC slogan. They also contain congratulatory messages pertaining to water, electricity and the Durban municipality’s clean audit.

MEC Dube-Ncube has seemingly used her government’s budget to pay for these posters, but then also took the opportunity to promote the ruling party. Taxpayers are therefore footing the ANC’s 2016 local government election marketing campaign in KwaZulu Natal.

One wonders why the MEC – during a time when South Africa and the province is going through extreme financial challenges- saw it fit to waste millions on self congratulatory messages instead of delivering water to drought-stricken communities or save struggling rural municipalities from complete collapse.

We are also again receiving reports of food parcels being used for electioneering purposes. If the abuse of state resources for the ANC’s gain continues unabated, it will place free and fair elections in jeopardy.

We therefore urge the Public Protector to immediately launch an investigation into this matter. We would like her to investigate whether the contract to produce these posters were done procedurally and legally. The IFP will be writing to her office in the coming week.

It will also be important to establish whether other MECs or even municipalities under the ANC-control have embarked on similar campaigns.

Finally we call on all South Africans to join us in a #StopAbusingOurTaxMoney campaign. Let us know if you have seen any incidences where government is abusing your taxpayer money by emailing us at [email protected].