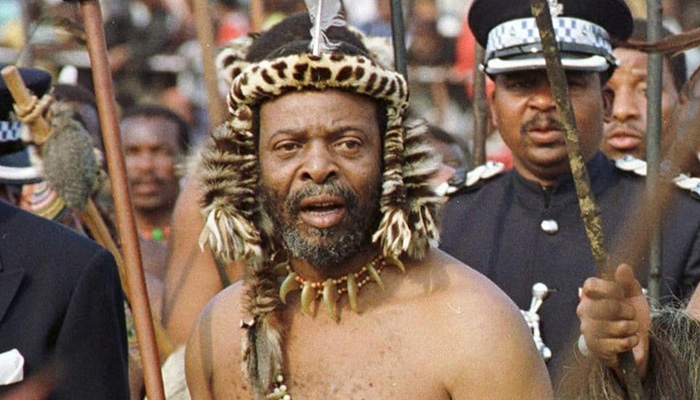 When my first cousin, King Cyprian Nyangayezizwe Bhekuzulu ka Solomon, appointed me as traditional Prime Minister to the Zulu Monarch and Nation, I never dreamed that I would outlive the King, and that I would serve his son for many more years than I served his father.

Thus when I stood at the coronation of His Majesty King Goodwill Zwelithini ka Bhekuzulu, in December 1971, I prayed for longevity for our King, knowing that our people would benefit from a long reign. It was an important day for me and all theZulu people. But also a difficult day for me in particular for reasons I will not give today.

What a blessing it is that the Lord has preserved His Majesty our King beyond all of this. We thank the Almighty God for answering our prayers. King Goodwill Zwelithini ka Bhekuzulu is our nation’s longest reigning monarch. Today, we celebrate 48 years under the reign of His Majesty our King.

This is a moment of thanksgiving for all of us, for the Lord’s mercy.

I consider it an unparalleled privilege to have served our King for almost five decades. In many ways, I have grown up with our King, serving in political leadership in our country alongside His Majesty’s leadership of our nation. I cannot count the number of times I have witnessed his wisdom and deep compassion for our people.

I have had many occasions to thank His Majesty and to honour him before our nation for all that he has done. Today, as we commemorate the 48 th anniversary of the King’s coronation, I want to thank His Majesty specifically for pointing the way for our people out of poverty and deprivation.

There is much being said in the national debate about the Ingonyama Trust. Allegations have been made that our people living in the Zulu Kingdom on land held under the Trust are somehow being dispossessed of their rights.

I want to put very plainly on record today that the Act which established the Ingonyama Trust was designed to preserve under indigenous and customary law the land that remained to the Zulu nation after generations of conquest, colonialism and dispossession.

Had we not placed this land under the Ingonyama Trust, it would automatically have been ceded to the State in April 1994. The communities of our Kingdom would be living today on State-owned land, with no security of tenure. Instead, the families of our nation have land to live on, and land to farm.

Every family receives according to its needs, ensuring that no one need go hungry, and no one is forced to migrate to the urban centres to live in slums and informal settlements.

When His Majesty our King speaks about food security, his words have resonance, for our people are able to plough and plant. We are able to raise livestock. We have the land to cultivate and produce food. My sadness at my age is that most of the King’s subjects everywhere, even here in the Nongoma District, do no longer cultivate the land to produce food for themselves and their families. In this way we have failed the King’s biggest wish for us because of laziness. Last time I urged that when we pray, let us also pray for our laziness. By doing so we are playing into the hands of our enemies because they see what do they individually do with the Ingonyama land at their disposal anyway.

This is the first step out of poverty and deprivation. It is a step into empowerment.

Unfortunately, when the academics debate the Ingonyama Trust, these truths remain unspoken. There is a lack of understanding of indigenous and customary law. There is a lack of appreciation for our traditions and our age-old social structure that provides security for the individual within the group.

But above all there is a lack of respect for the institution of traditional leadership, which administers the land on behalf of our King. Even now, I speak about this issue, because I believe it is pivotal to the legacy of our monarch and the continued strength of our nation.

It would be remiss of me not to speak as I do, because the anniversary celebration of the King’s coronation brings with it the obligation to secure the future. Just as we celebrate the years behind us, we must secure the years ahead.

With the failing economic climate and the unstable global climate bringing us quickly to a point of no return, we need to move now to adapt to the future. One of the most important steps we must take is a step towards food security.

In his wisdom, the King understands this. And with his leadership he has guided us in the right direction.

As we celebrate the coronation anniversary of His Majesty the King, we thank him. And we thank the Lord for his reign.

Let us listen now as our King speaks.