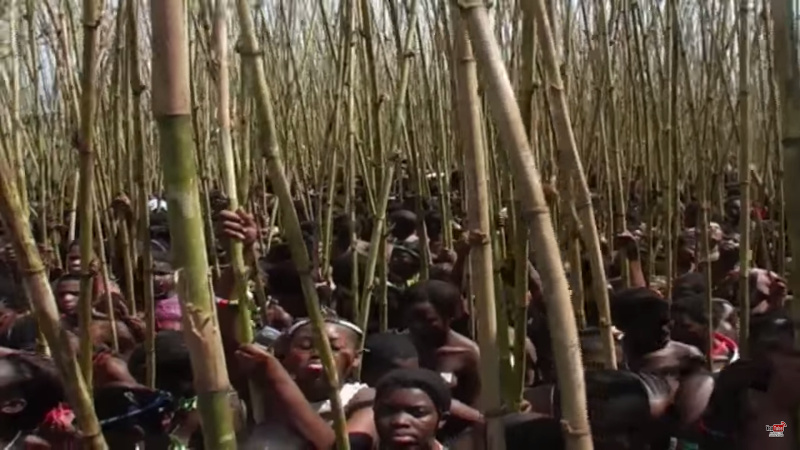 Every year, as I witness the beauty of this ceremony, I am filled anew with pride in my heritage. I cannot help but think of the many young maidens who laid their reeds at the feet of our King, 200 years ago. When King Shaka ka Senzangakhona reigned over the Zulu Kingdom, he instilled traditions and cultural ceremonies that would express our nation’s value system.

The Reed Dance is one of those ceremonies. It expresses our nation’s respect for women and our understanding of their central role in our families, communities and society. It speaks of our support for chastity and self-restraint. It honours self-discipline and wise life choices. And it reminds young people, both women and men, to respect their bodies and respect each other.

Through ceremonies like this, King Shaka established strength in our nation. He was a strategic social engineer, understanding the importance of identity, continuity and connection. This ceremony is not a stand-alone event, but is part of the journey of all Zulu women, as they are guided, trained and mentored into the fullness of life.

It is no coincidence that the Reed Dance ceremony fell away in the years that followed the Anglo-Zulu War. With our nation’s defeat on the battlefield, colonialism flourished, and every effort was made to destabilise and weaken the Zulu nation. Our kingdom was divided into eleven artificial kinglets, and our traditions were seemingly forgotten.

But the Zulu nation has never been destroyed. Where other kingdoms disappeared, ours survived. Where other nations lost identity, ours remained. History has revealed the enduring strength of the Zulu nation. I believe that strength was built through cultural ceremonies and traditions. I believe they forged in the hearts of our ancestors an unshakable sense of who we are.

Because of this, we are here today, doing what our ancestors did. Like the maidens who danced before King Shaka, our young maidens dance before His Majesty our King, because 33 years ago, in 1984, our King reinstated the Reed Dance ceremony.

Many of your grandmothers and great-aunts participated in that first ceremony. When it was held again the following year, and the year after that, we saw the pride of our people. We realised that we had to find a way for all our maidens to come to Enyokeni. Thus, under my leadership as Chief Minister, the erstwhile KwaZulu Government began providing financial support so that this ceremony could grow and continue.

When we look back now, we can only marvel at our King’s somehow prophetic wisdom. Just a decade later, a new enemy threatened our people. It was not a military threat, but was no less deadly. It was the threat of HIV/Aids which had begun to decimate our youth.

The battle against HIV/Aids demanded that we return to our cultural values of chastity before marriage and respect for purity. These were the very values first expressed through the Reed Dance ceremony of King Shaka, and they were now being honoured again.

Today, the Reed Dance ceremony has become a cultural focal point. Thousands upon thousands of young women travel here from across KwaZulu Natal, from Mpumalanga, Gauteng and even Swaziland. Some have done this before. For others it is the first time, but you have heard about from your mothers, your aunts and your older sisters.

You know exactly what will happen today, for you have been taught and prepared by women who have walked this same journey. So you understand the significance of this special moment. Through this ceremony, you have expressed your intention to make good decisions. I want to thank you, because your good decisions secure more than your future; they secure the future of our nation.

In the years to come, you will play a fundamental role in our families, our communities and our nation. We want you to be secure in your identity and your intrinsic value. You are part of a nation that honours, respects and values women.

We recognise you as the wealth of our nation. It is therefore right that His Majesty our King should rise on this significant occasion to speak to his people about our value system, our traditions and the tools we have for overcoming the challenges of the present.

Let us listen carefully to what our King has to say. Let us treasure his wisdom and consider it often in the years ahead. This moment is not just for today. It is for a lifetime. It will shape who you are and who you become, for in this moment you are fundamentally connected to a shared past, and a shared future.

I am honoured to present His Majesty our King.