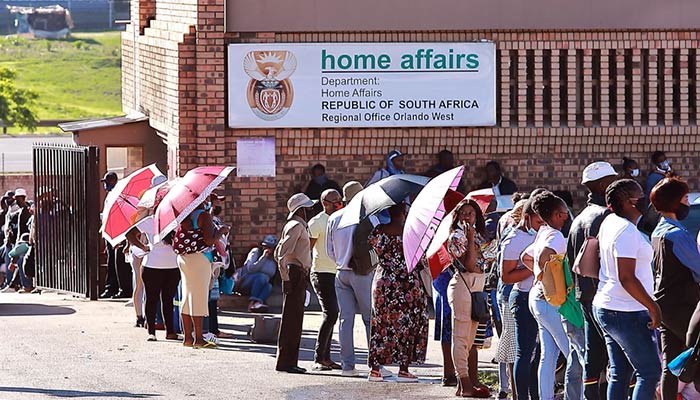 House Chairperson – it is another year, another Budget Vote Debate and yet the Department of Home Affairs remains broken. Despite the best efforts of Minister Motsoaledi, his Deputy and that of the DG, this Department remains dysfunctional and functioning in a perpetual crisis mode.

To add insult to injury, Home Affairs Offices are perpetually offline, largely due to ageing, obsolete wireless infrastructure and all the issues the Minister listed earlier. Calls and emails go unanswered. And their website is often not functioning. This Department has also not been able to roll out its services to more than a handful of banks.

This dysfunctional system has opened the door to a variety of entrepreneurs, including the so-called ‘queue-sitters’, but there are more elaborate schemes, such as the one at the Pretoria Home Affairs Office, where, for R500, you can jump the queue, and get your paperwork processed in 30 minutes. As an added bonus, you are even walked to your car and offered a cooldrink.

So broken is this system, that MPs have become admin officers of this Department. Every day, we are inundated with calls from citizens in desperate need of help with their passports, IDs, birth certificates and permits.

At the heart of this crisis is an underfunded Department with dilapidated offices, staff shortages and vacancies in critical senior posts. Less than half of the Department’s offices have been modernised. But the biggest crisis this Department presides over, is a full-blown immigration crisis.

Chairperson, the reality is, we do not have borders. The current manual asylum-seeker system has collapsed and has been abused. Corruption is endemic. Syndicates run by foreign nationals are printing fake South Africans documents, brazenly using Home Affairs Offices as their base of operation. Millions of non-citizens enter South Africa, never to leave again. And let me state that the BMA is not the panacea to our problems – it will take millions we don’t have and many years to become fully operational.

Chairperson so deep and far reaching is this immigration crisis that reports suggest that ISIS is being funded from our shores by small businesses run by illegal migrants.

So deep is this immigration crisis that it has relegated South Africans to the unemployment lines. By Government’s own admission, some employers prefer employing only foreign nationals – even those who are not legally permitted to work in South Africa.

It is our government failures that are turning worker against worker, destabilising communities, and pitting citizen against non-citizen. The rise therefore, of groups seeking to tackle our immigration crisis, is a direct response to our government’s own failures.

So deep is this immigration crisis that a Russian-born actress reportedly recently succeeded in lodging a bogus asylum claim in order to attend a party hosted by a South African billionaire. This, after alleged political interference to persuade immigration officials to let her into our country, failed.

That is the extent and scope of this crisis. A clear picture of a dysfunctional, broken Home Affairs system.

Chairperson, it is time for our government to table to the nation a plan of action to fix our immigration system to ease the legitimate concerns South Africans are raising. I am glad that the Minister made a commitment in this regard, but we would need timeframes for this plan to be launched.

Minister, the IFP believes that such a plan must include a commitment for additional immigration inspectors and resources for deportations from Treasury. With the prevalence of fake South African documents increasing, we require a review of all passports, IDs and residency permits; a commitment to resolve the backlog in the asylum-seeker system within 12 months, as well as establishing asylum-seeker and refugee processing centres at ports of entry. Those selling South African documents are committing a crime against the state and must face long and harsh prison sentences.

Minister, a failure to fix this Department will continue to put the safety and security of our citizens and the very future of our nation at risk.

Urgent action to restore the credibility of the DHA is needed now. We want to partner with you Minister, to build a Home Affairs South Africans deserve: one that meets its values of being people-centre, patriotic, professional, corruption-free, ethical, efficient, and innovative.
—
Contact