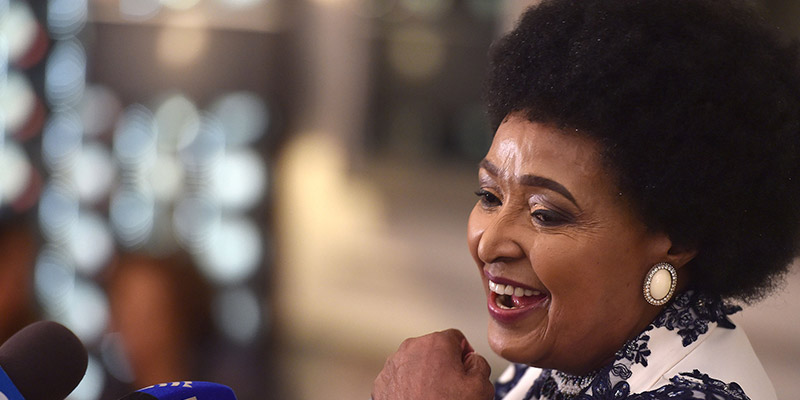 In Celebration of the 80th Birthday of Mama Winnie Madikizela Mandela

Many years ago, when I was a young freedom fighter, I used to visit the home of a delightful couple in Vilakazi Street in Orlando. The lady of the house would prepare mouth-watering meals, and the three of us would talk politics, sports, family and music until late into the night.

This evening, that lovely lady is present and we have the honour of wishing her well as we celebrate her 80th birthday.

I thank God for sparing the life of Mama Winnie Madikizela Mandela, not once, but many times, so that she may now join that exclusive club of which I myself am a long-time member: the club of octogenarians!

The Lord must have had a busy time indeed looking after Mama Winnie, for she was never one to shy away from dangerous situations or conflict. A lesser person would have been broken by the continual harassment she was subjected to by the Police. But she was fearless. Even while banned and living in Brandfort, she boldly moved about doing the work of the African National Congress.

It still pains me to think of the many years that Madiba’s incarceration stole from Mrs Madikizela Mandela. She graciously brought me messages from her husband, and took messages to him from me. I think she became a messenger for many leaders during that time. She was never allowed to be simply a wife.

The Mandelas had married just a few years after my wife and I tied the knot. So when I witnessed her courage, dignity and resilience in the face of her husband’s absence, my admiration for Mrs Madikizela Mandela grew.

It grew again when we entered the first democratic Parliament together. Mama Madikizela Mandela became the First Lady of South Africa and was appointed Deputy Minister of Arts, Culture, Science and Technology. We served side by side in the Government of National Unity.

In fact, we began to work closely together, because she was appointed to the parliamentary Portfolio Committee on Home Affairs which performed an oversight role over my Department, as Minister of Home Affairs. Together we navigated the difficult reform of the immigration system.

It would be difficult in a short tribute like this to express the depth of Mama Madikizela Mandela’s contribution to our liberation struggle and our democracy. I can thus only speak about my own experience of her.

I have found her to be bold and outspoken, which I am sure is no surprise. In her book, “491 Days”, Mama Madikizela Mandela revealed some truths that challenge years of propaganda. She said about me, for instance, and I quote: “Buthelezi… was one of the greatest fighters in his day… he was entrusted… with fighting the system from within. And that is what people do not know.”

It is perhaps only now, at this age, that we can look back on a lifetime and distinguish the truth from what we were told. That is the blessing of age. I pray that as Mama Madikizela Mandela continues to serve our nation, she will discover many more blessings.

She has been a wonderful sister and fellow freedom fighter. I am thus delighted to wish her a very happy birthday!