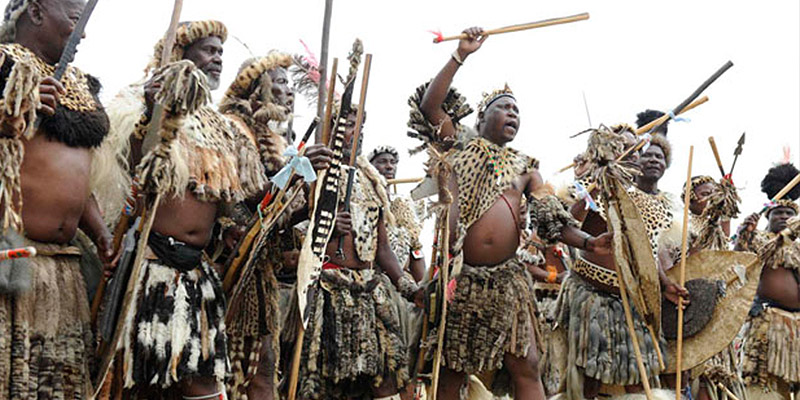 The name of King Shaka ka Senzangakhona is known throughout the world. Because of the legacy he built, the image of a Zulu warrior is today symbolic of courage, ferocity and pride, not only in our culture, but in many cultures both African and Western. It was King Shaka’s vision that unified fragmented clans into one of the most powerful nations. It was King Shaka’s military legacy that defeated the British army at Isandlwana. It was King Shaka that taught us the strength of our own identity.

We rightly celebrate this legacy every year, honouring the founder of the Zulu nation. But this year our celebrations carry an added significance, for this year we celebrate 200 years since the founding of the Zulu nation. I therefore applaud His Majesty our King for choosing to move this celebration to the Moses Mabhida Stadium this year. We welcome the presence of all those who have come to honour our nation’s history, founder and heritage.

As I fulfil my responsibility of introducing the King, I think of those who fulfilled this same responsibility before me, down the line of our nation’s kings. I think of my own father, Inkosi Mathole Buthelezi, who was the Prime Minister to King Solomon Maphumzana ka Dinuzulu. I think of my great grandfather, Mnyamana ka Nqengelele Buthelezi, who served King Cetshwayo and his heir, King Dinuzulu. My great grandfather Mnyamana became known as Uyise Wa Bantwana Baka Mpande, for he was put in charge of King Mpande’s children. He served as Commander-in-Chief of the King’s Regiments during the Anglo-Zulu War.

I think also of my great great grandfather, Nqengelele Buthelezi, who served in the royal court of King Senzangakhona and tutored the royal children. Among those children was the young Prince Shaka.

There was nothing exceptional about Prince Shaka’s birth or childhood that could have predicted the magnitude of his leadership. Prince Shaka had been born out of wedlock. Thus he and his mother, Queen Nandi Ndlovukazi kaBhebe of the eLangeni, had no real social standing. When Prince Shaka was just six years old, his parents’ marriage failed, and Queen Nandi began to suffer persecution in the Royal Court.

From a young age, he showed tremendous courage and skill, and was revered among his peers. It was his military training under Ngomane that laid the foundation for Prince Shaka’s eventual legacy as one of history’s greatest military strategists.

When King Senzangakhona died in 1816 ,Prince Shaka returned to claim the throne. He asked Ngomane to govern as his Prime Minister, and to train the King’s regiments in the ways of the Mthethwa warriors. King Shaka imposed strict discipline over his troops and began implementing visionary military strategies which would systematically forge a unified and powerful Zulu nation. The process of conquering and drawing together fragmented peoples into one mighty nation had begun.

My great great grandfather, Nqengelele Buthelezi, became a senior figure in the royal court of King Shaka, advising him on military matters. The King understood the value of surrounding himself with people of wisdom and courage, and in the council of these advisers he built a lasting legacy.

That legacy still guides us today. It is not just part of our history, but part of who we are and who we must become. As we face the challenges of the present, we can still look to King Shaka’s example for wisdom. I think, for instance, of our fight to protect our natural environment that is taking centre stage this weekend at the 17th Conference of Parties to CITES, the Convention for the International Trade in Endangered Species. Many do not realise that King Shaka was a conservationist. He recognised that our natural resources are not infinite, and that wildlife needs to be protected to ensure sustainability. He thus set aside land on which hunting was prohibited.

I am proud, as a descendant of King Mpande, King Shaka’s brother, to champion the cause of conservation. One aspect of this is the fight against captive-bred lion hunting that sees around a thousand lions destroyed every year in our country, as trophies or victims of the bone trade. This past week, together with Four Paws International, I delivered over 545,000 petitions from around the world to the Minister of Environmental Affairs, pleading that the slaughter be stopped. Our lions, our elephants and our rhinos need our intervention. The lion is respected in our culture to the extent that the other title of our King is Ingonyama which is lion in English.

Conservation is but one of the examples King Shaka gave that guides us even now in how we should approach social, economic and cultural challenges. His greatest example, however, is undoubtedly the unification of diverse people. Within the society that King Shaka forged, every man, woman and child had a role and was valued. Society functioned cohesively because of the individual contributions of each member. That unity was the secret to our nation’s power.

In this lies a lesson we must consider afresh. After 200 years of struggle, war, oppression, hardship, victories, peace and politics, is our nation still unified? And do we still seek unity beyond the Zulu nation, in the broader nation of South Africa? This is the home of the Zulu nation. If we do not seek the best for South Africa, we may find our home destroyed. Because South Africa is fragmenting along the lines of race and politics, and there is a growing danger of disunity.

It is up to us, as the descendants of King Shaka, to provide leadership in the fight for unity, social cohesion and renewed strength. Celebrations like this are important, for they remind this generation of an identity that spans 200 years. We cannot cast away our inheritance. We have inherited a legacy of unification. Let us live it out.

Now, as we honour King Shaka ka Senzangakhona and the legacy he built, it is my privilege to present our King who is our main Speaker on this auspicious occasion. Our King has been on this throne for 45 years. He is the longest reigning Monarch of the Zulu Nation. We are fortunate to have him sitting on King Shaka’s throne as we remember King Shaka’s emergence as the Founder and illustrious Founder of the Zulu Nation. We have many things to celebrate about the reign of our present King. He has been a worthy successor of King Shaka ka Senzangakhona.