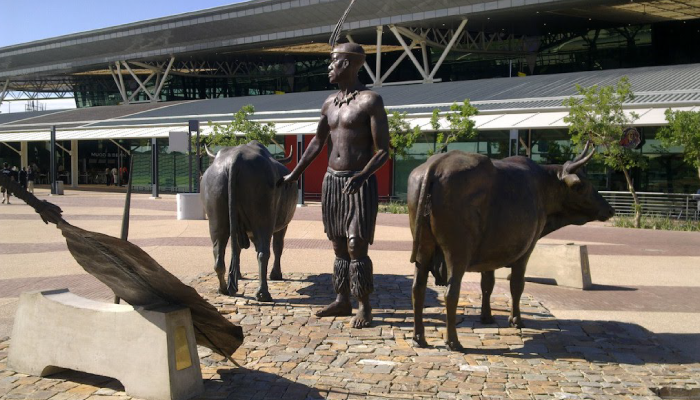 Two hundred years ago, on the battlefields of Zululand, the warriors of King Shaka ka Senzangakhona tasted victory, again and again. Through unique military strategies and the rigorous discipline imposed by the King, the Zulu regiments became unstoppable. A nation was being built, tribe by tribe, clan by clan, knitting in those who would give allegiance and destroying those who would not.

What King Shaka built remains today. It lives in the grandsons and greatgrandsons of warriors and Amakhosi. It lives in the spirit of the Zulu nation, in our values, our social structure, our traditions and our songs. It lives not because of the legacy of conquest, but because of the legacy of unity. King Shaka warred in order to build. He conquered in order to unite.

What he birthed was one nation, so powerful that it could not be defeated by anything less than the full might of Queen Victoria’s army. His leadership in this part of Africa changed history. Because of King Shaka, the Zulu nation is known throughout the world.

When I think of the heat and dust of battle, of muscles and sinew jabbing and thrusting, of sweat and blood and grit and death; I know that unity is a precious prize. It is hard won, a treasure of great value. It is not something we can conjure through words or laws. Rather it comes through conscious, purposeful, deliberate actions, consistently applied, in the face of opposition.

This is the lesson of King Shaka kaSenzangakhona. To achieve anything of value,
sacrifice is required. And achieving something of lasting value, demands tremendous
effort.

Today, after generations of conflict and war, His Majesty King Goodwill Zwelithini kaBhekuzulu reigns in a time of peace. For that we are deeply grateful. His Majesty our King traces his lineage back to the father of our nation, King ShakakaSenzangakhona. He sits on the throne of King Mpande, the brother of King Shaka. In our monarch, our past, present and future are consolidated into a single destiny.

We have good reason to be proud of our history. It formed our identity and inculcated the values which have sustained our nation for two hundred years. Through courage and strength, we have survived. But through cohesion and good governance, we have thrived.

The path our nation walked after the Battle of Ulundi in 1879 was painful and difficult. The Zulu Kingdom was conquered in the Anglo-Zulu War, but our spirit was never defeated. Our kingdom was artificially divided into 13 kinglets, setting the scene for tensions and rifts. Yet the concept of the Zulu nation remained. Those born into our nation knew that they were Zulu, as much as a baby born today knows its identity as part of our nation.

Much has been written about him, about his alleged cruelty, his single-mindedness and his thirst for blood. But no one has challenged his military genius or questioned his ability to construct a well governed, cohesive society. King Shaka is a symbol of strength and courage throughout the world. And his legacy lives on.

When we gathered last year to celebrate that legacy I spoke about a rising animosity between South Africans that can only be defeated by the spirit of unity. I spoke about hate speech and the need to consider ourselves brothers and sisters. It pains me to know that as we meet this year that animosity has spilled over into violence.

There have been attacks on foreign nationals, as though all our country’s woes can be placed at the feet of migrants. There have been attacks on women, in their homes, on the streets and even at the post office, as though all our frustration and anger can be taken out on women. Crime has increased. Rape has increased. Murder, abduction and violent abuse has risen like an evil tide over South Africa.

I warned last year that this was coming, and I urged us to act. We are quickly reaching a crisis point. Just last week the President of the Republic called a Joint Sitting of the National Assembly and the National Council of Provinces to address South Africa on the crisis of gender-based violence. As the President rightly said, the term “gender-based violence” hardly conveys what we are facing. He suggested we call it “male-perpetrated violence”.

Whatever we call it, it must stop. In the same way, whether we call attacks on foreign nationals xenophobia or afro-phobia or pure criminality, the fact remains that we have to deal with it. We have to ensure that it never happens again. We have to get to the root causes, and fix it.

When I handed over the baton to a new leadership of the IFP, I gave my Party a final mandate: protect our women and children. We have an obligation as citizens of a democratic country to be vigilant over the vulnerable. Our commitment to human rights is tested most keenly in how we protect the poor, the vulnerable, the children, the sick and those under the deep duress of social and economic injustice.

This includes those who have fled their own country to try to survive in ours. I know this is not an easy message to hear, for South Africa has limited resources and our people are struggling already. But where someone is living legally amongst us, obeying the law and contributing, we must protect them as we protect ourselves. It is a duty bestowed by our Constitution and our conscience.

Let us never forget that King Shaka himself was an outcast, forced to rely on the benevolence of others. He and his mother, Queen Nandi kaBhebhe of the eLangeni, had no real social standing. Shaka had been born out of wedlock and, when he was just six years old, his parents’ marriage failed. Queen Nandi suffered persecution in the Royal Court, which was witnessed by Nqengelele ka Mvulane Buthelezi and Mudli ka Ndaba Zulu. These were the two people who prepared the way for her to get sanctuary at King Dingiswayo’s Royal Court.

Seeing the Queen’s tribulations, they negotiated with the Mthethwa Clan to whisk her away from KwaNobamba Royal residence, together with the young Prince, who was placed under the protection of the Inkosi of the Mthethwas, Inkosi Dingiswayo kaJobe Mthethwa.

Inkosi Dingiswayo took the Prince under his wing and raised him in his household. He was trained as a warrior under the Mthethwa Clan, under Induna Ngomane Mdletshe’s leadership as Commander-in-Chief of the Mthethwa army.

Years later, when King Shaka ascended to the throne, he asked the very man who had trained him, Induna Ngomane, to govern as his Prime Minister, and to train the King’s regiments in the ways of the Mthethwa warriors. King Shaka understood the value of surrounding himself with people of wisdom and skill.

King Shaka’s reign lasted just 12 years and he died at the young age of 41. But by the time of his death he ruled over 250 000 people, all of whom identified themselves as members of the Zulu nation.

It is possible to build quickly and still to build something of lasting value. But it is also possible to destroy something valuable in a very short space of time. I fear that if we do not change the trajectory of our country, we will find that much has been destroyed that cannot easily be rebuilt. Our international reputation. Our people’s psyche. Our sense of cohesion. Our belief in justice.

For five decades, His Majesty our King has led with wisdom. Let us listen now as he speaks to us again, for we need wisdom at this juncture, both for our nation and our country.

May God bless our King.