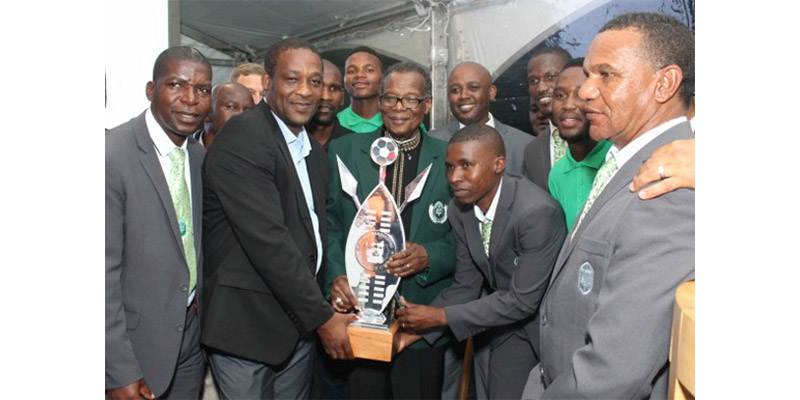 I am quite humbled by the presence of so many of my colleagues, family and friends to witness the launch of the Prince Mangosuthu Buthelezi Legacy Cup. Throughout my long journey in leadership, I have received many awards and accolades. But there is something special about tonight’s celebration. Tonight my life’s legacy is being honoured by a club that was founded by my uncle, King Solomon ka Dinuzulu. It is therefore good to share this moment with all of you.

In 1932, just a few years after my birth, King Solomon founded the Zulu Royal Conquerors, a football team with roots firmly planted in Durban. The team was the pride of the Zulu nation and everyone supported them. I remember from a very young age, growing up at my uncle’s palace, how the men would talk about the Zulu Royals – and they weren’t talking about the King’s family!

I became just as avid a fan as I matured. I remember how, in my first job as a Clerk in the Office of the Native Commissioner, my colleagues and I used to analyse the Zulu Royals’ last game and predict the score for their next one. My colleagues, Bill Bengu, Simon Mtimkhulu and Reginald Ngcobo all had their favourite players, as did I.

Whenever I had free time, I would visit Inkosi Albert Luthuli at Lakhani Chambers in Grey Street, the offices of the ANC in Durban. Inkosi Luthuli and I would spend hours discussing politics, religion and leadership – and, of course, the Zulu Royals Football Club. Inkosi Luthuli loved the game. He also enjoyed how soccer brought so many different kinds of people together.

I recount these memories because I want you to understand the deep roots of the AmaZulu Football Club in the Zulu nation and in KwaZulu Natal. I myself have watched countless matches, feeling the whirlwind of emotions that every soccer fan enjoys; from anxious anticipation, to hope, to camaraderie, to frustration, to joy. It’s no wonder soccer is associated with some of the most passionate supporters.

With this background, I was delighted to be approached by the General Manager of AmaZulu Football Club, Mr Lunga Sokhela, to discuss the creation of a Legacy Cup. When Mr Sokhela then explained that it would celebrate my own legacy, I was deeply humbled. This is not something I have asked for, but I feel honoured that AmaZulu Football Club has come up with this idea and has pursued it. The organisation of tonight’s launch was left in Mr Sokhela’s hands, for this is his initiative.

I must thank both the Zululand District Municipality and the Ulundi Local Municipality for responding so readily to Mr Sokhela’s idea. This Legacy Cup will undoubtedly bring revenue into the area, which will have economic benefits for our people. I am grateful that matches will be played in Ulundi, for this is a significant place for the Zulu Nation. It is here that King Cetshwayo’s regiments were defeated, and it is from here that our nation began to rebuild. Ulundi has become synonymous with an unconquerable spirit.

Tonight, I leave it to Mr Sokhela to explain the details of this Legacy Cup. For my own part, I would simply like to say thank you. Thank you to AmaZulu Football Club, thank you to the municipalities, thank you to the football community that stands behind this wonderful initiative, and thank you to the media that will generate interest and cover the matches so that everyone can enjoy the game.

There is enormous support for AmaZulu Football Club this season, as we all hope to see them promoted to the Premier Soccer League. That is where they belong. So we will be watching with expectation and standing in support of our players.

Friends, I have often thought that there are great similarities between the game of soccer and the game of politics. That famous midfielder, Sugar Ray Xulu, once said, “There should be fair play. Play the ball, not the man.” I have tried to bring the same approach into politics. My Party is often alone in playing the ball, when everyone else is playing the man. But we have built a reputation of integrity on this very basis. People know they can trust the IFP to keep our eye on the goal.

This is but one lesson we can draw from soccer that applies to politics. There is also the lesson that what happens off the field is just as important as what happens on the field.

As political leaders, we need to live the game. We need to keep ourselves fit between matches and make sure that we are always training. Our responsibility doesn’t end with a parliamentary sitting or a sitting of the provincial legislature. Between every public debate, when the spotlight is off, we need to go back to our people and exercise. Listen, guide, advise, assist and serve. This is what keeps us fit as leaders.

Whatever we do, we must play as though everyone is watching. How often have you come across someone in a small rural village, who has no television, but who knows the score of last night’s game? Politics, like soccer, has a way of getting around. People talk about what their leaders have done or said, both on the field and off. We are judged by our performance, and by our character which is evident in people’s experience of how we treat them.

Thus another valuable lesson from soccer is to always remember the fans. Tragically we have witnessed what happens when a party begins to look inwards at what is best for the organisation, rather than outwards at what is best for the people that the organisation should serve. The ruling party has forgotten the fans. They have left behind the will of the people, to forge into a new era of the will of one man.

Just now our country is going through a test as far as respect for a Constitution is concerned.

So while we tirelessly work to level the playing field, the odds are systematically being stacked against South Africa’s future. Our country is going through a crisis.

Fortunately, like soccer, politics is a team sport. Undoubtedly, rogue players doing their own thing can damage the success of the team. But ultimately the game is won or lost on the basis of everyone’s play. Whether you’re a striker, a midfielder, a defender or a goal keeper, your part in the game is essential. So none of us should feel helpless as we face the current crisis in South Africa.

We have learned from the rules of soccer. We know our opponent. We have seen the direction of play. It is up to us to power forward with great game plan. For the IFP, that means pursuing peace and unity, as well as change. In the midst of the present storm, we must remain the voice of reason.

Over 85 years, many goals have been scored by the players of AmaZulu Football Club. But tonight I want us to remember one specific player, George Dearnaley. Dearnaley scored the most goals in one season, in 1992, the year AmaZulu won the Coca Cola Cup. In that one season, Dearnaley scored 23 goals.

I want us to remember that achievement because we are in a similar season. As many goals as the IFP has won since our inception, this is the single season in which we must win the most goals. This is the time when we must play the hardest. What we do now will be remembered by future generations, because our country is at a new crossroads. The IFP’s legacy is still being created.

With these thoughts, I wish to thank Dr Patrick Sokhela and the AmaZulu Football Club, as well as Mr Lunga Sokhela for all he has done to birth the Prince Mangosuthu Buthelezi Legacy Cup. I am honoured indeed.