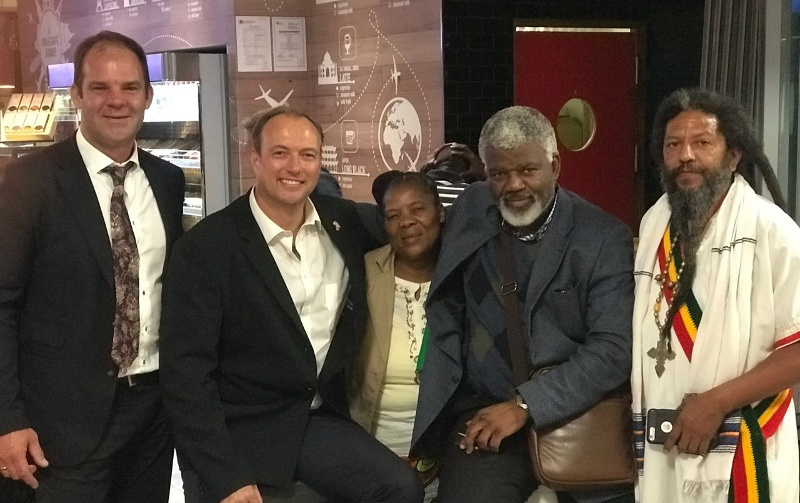 The Inkatha Freedom Party is extremely pleased to announce that the Human Rights Commission conducted their first seminar into GMOs and their impact on human rights, at the their offices in Braamfontein yesterday 6 December.

This was after a complaint had been lodged on 16 September 2016 by Prince Mangosuthu Buthelezi MP, supported by the South African Traditional Doctors Union and the Cancer Association of South Africa [CANSA].

IFP spokesperson on Agriculture, Forestry and Fisheries, Inkosi Russel Cebekhulu MP, who attended the seminar together with IFP’s Adv. Anthony Mitchell, said, “This seminar and dialogue into the safety of GMOs and herbicides containing the compound Glyphosate, is an important first step and interaction, as we as a country grapple with the controversy surrounding the safety and impact of genetically modified organisms [GMOs], Biotech [BT] foods and the use of the herbicide, Glyphosate, on the health of the human body as well as the impact on the environment.”

“Today is the first step into what we trust will be a number of such interactions before the Human Rights Commission, in which the safety of these GMOs, BT foods and Glyphosate will be fully unpacked through thorough investigation and independent study.”

“We were shocked when the representative from the Department of Health informed us that the Department, which is ostensibly responsible for ensuring food safety for all South Africans and for ensuring that our foods will not cause harm when consumed according to their intended purposes, stated that the Department had not conducted any of its own independent studies into the safety of GMOs and herbicides, the reason being given that the Department lacked the financial capacity to do so. Effectively, this means that our Government is shirking its responsibility to our citizens. Many countries around the world, including our BRICS partner, Russia, have banned the importation and cultivation of GM crops, citing serious concerns over their impact on human health.”

“The lack of labelling of GM foods is another issue of serious concern as consumers have the right to know what they are eating. 85% of South African maize and 100% of our soya is currently genetically modified. South Africa is the 9th biggest consumer of GM and Biotech crops. These are a staple food for the vast majority of our population, the poorest of the poor, and they have a right to know what they are consuming and feeding their children. There is simply too much secrecy around the entire GM issue.”

“Our sincere thanks and appreciation go to the Commissioners of the SAHRC, Commissioners Sibanyoni, Dr Odile Lim Tung and Mr Pandelis Gregoriou, as well as convenor Dr Fola Adeleke, and Commissioner Chris Nissen. They have our full support as they interrogate this matter, without fear, favour or prejudice, on behalf of all South Africans,” concluded Cebekhulu MP.