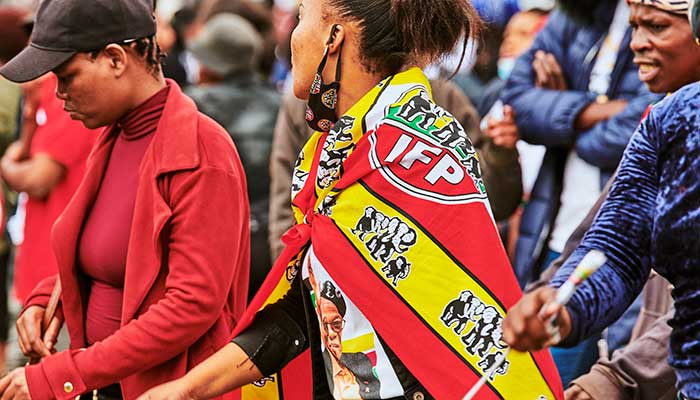 South Africa is teetering on the edge of a bottomless precipice. Over 25.5 million South Africans are without work; food, fuel and electricity prices are sky-high, and unaffordable for many. Reports from the Auditor-General indicate that local government – which serves the majority of our people through the provision of basic services – is in a state of complete disarray, with billions lost every year through irregular, and fruitless and wasteful expenditure. This situation only continues to worsen.

The people are crying out for leadership, for answers, for basic services, and for a means to support their families.

In response, the IFP convened a workshop of all IFP MPs, MPLs and Mayors, in order to streamline operations across the IFP’s three spheres of governance and to plan towards 2024, 2026 and beyond.

The Workshop provided a unique opportunity for IFP leaders to interact, as well as to hear from both the Party’s Founder and President Emeritus, Prince Mangosuthu Buthelezi, MP, as well as Party President and Leader of the Official Opposition in KZN, Hon. Velenkosini Hlabisa, who had the opportunity to address the gathering.

Many issues were raised, among others, the the ever-growing crisis that is Eskom. We are, yet again, experiencing consecutive weeks of loadshedding, which economists have estimated are costing South Africa R4 billion per day.

IFP leadership is in agreement that the stranglehold Eskom has on the country’s electricity supply must be broken. The IFP is calling for public-private partnerships to be fast-tracked, and municipal capacity strengthened for the distribution of electricity. Red-tape and other administrative obstacles hampering IPPs from delivering must be removed. Further, it is apparent that there is an absence of leadership – both politically, and administratively. The Minister, Eskom Board, and its executive are not fit-for-purpose.

As the IFP, we are demanding consequences.

Eskom is not the only SOE in crisis – Transnet, DENEL, and numerous others are also in a state of near collapse. For this reason, we as the IFP, are calling for the Department of Public Enterprises to be dismantled, and all entities must be placed in their line function departments.

Another issue of serious concern is the ever-increasing cost of fuel. The IFP has been calling on government for years to address this situation, to cut the levies that form part of the fuel price, and give consumers much-needed relief.

The Workshop reflected on the year that was, and the devastating July 2021 riots, the cost of which – both in human lives and the negative impact on the economy – was far too high. However, considering the current circumstances in the country, with over 25.5 million people unemployed, food costs rising, and people becoming more and more desperate, we are fearful that unrest might boil over yet again.

In 2021, the IFP provided leadership in the wake of the unrest, in 2022 we were on the ground supporting the people after the devastating floods; and we will not shy away from stepping up to provide leadership yet again. We will continue to monitor the rollout of all relief promised by government.

As the IFP Parliamentary Caucus, additional discussions were held on the last day of the Workshop, and a renewed commitment was made to raising the key issues and holding the Executive to account. The Caucus remains committed to constructive opposition, and to adopting a solutions-orientated approach.

The issue of corruption in the state weighs heavily upon us as a Caucus, and, despite the Zondo Commission now having delivered the State Capture Report in its entirety, we as the IFP feel that there are unnecessary delays in taking action against those implicated. As we have said in the past, prosecution must proceed without delay.

Further, for the remainder of the year, the IFP Parliamentary Caucus will be conducting heightened oversight, with a particular focus on health issues. The Party will also continue to roll out our Private Members Bill, the Employment Services Amendment Bill, to our constituencies across the country.

The IFP Parliamentary Caucus will be paying special attention to several pieces of significant legislation, among others, the National Health Insurance (NHI) Bill; the Expropriation Bill; the Climate Change Bill; the Electoral Laws Amendment Bill; and the Cannabis Bill.

The Party’s leadership left the Workshop with a renewed focus and purpose, and a commitment to the party’s principles of servant leadership, self-help and self-reliance, and ubuntu/ botho.
—
Contact
Hon. Mkhuleko Hlengwa, MP
IFP National Spokesperson
071 111 0539