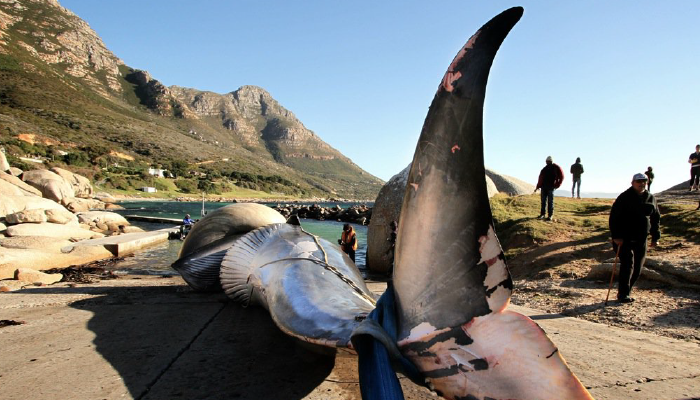 The Inkatha Freedom Party is incensed at governments continued support for a so-called ‘experimental’ yet for-profit octopus fishery in False Bay, Cape Town which on the 10th of June claimed yet another Bryde’s whale who in the prime of his life was horrifically killed through entanglement in one of the many thousand octopus traps that have been set along the False Bay coastline.

IFP Chief Whip in Parliament and spokesperson on Environment, Mr Narend Singh, MP, said ,”The IFP deplores the wanton destruction of such iconic marine life and holds government complicit in the killing this male bryde’s whale on the 10th June, as this licence should have never been granted in the first place,”

“I am advised by Mr Craig Foster of the Sea Change Project that in the last two years more than eight whales(young humpbacks included) have suffered such torturous deaths through having the misfortune of swimmining into and becoming entangled in one of the many thousand octopus traps currently set in False Bay, Cape Town.”

“The IFP has raised the ludicrousness of this issue before; essentially government issued an ‘experimental licence’ to a small fishery owned and operated by Mr Gerry Nel over 15 years ago. This licence is still in operation and is responsible for the extraction of approximately 40 tonnes per year of octopus from false bay which are then destined for fine dining restaurants in Asia,”

“Aside from the total lack of beneficiation to the South African economy, this enterprise only benefitting a few wealthy fishermen, one must also consider the fact that octopus are a keystone species and essential food source for a large number of marine predators in the area without which the entire kelp marine ecosystem in False Bay will collapse,”

“It is also a mystery as to how the quota of 50-100 tons of octopus for extraction was set with absolutely zero scientific knowledge or research on the actual numbers of octopus living in the bay. This quota number has also not been changed over the years and no data has been made public,”

“Whales are protected in South African waters and any unauthorised interactions or harrasment of whales is considered unlawful and the perpetrator thereof can be fined up to R300,000,00 rand. Yet the killing of the whales has gone on without any fine or penalty to the octopus fishery concerned,”

“We further call upon the citizens of Cape Town and South Africa to voice their outrage at this continued and profligate ‘for –profit’ pilfering of the South African marine environment at the expense of our marine ecosystems,”

“False Bay is an extremely sensitive marine environment and home to a number of iconic species such as the endangered great white shark, a number of whales species that come into the bay annually to calf, dolphins and large sections of great African kelp forests that are home to thousands of indigenous marine species and as such it should be accorded the utmost protection by government, the entire bay being designated a Marine Protected Environment [MPA],”

“I have personally sent to correspondence to the Minster of Environment, Forestry and Fisheries in this matter and ministerial questions are currently being filed at parliament in the hope that the practice and licence for octopus fishing in False Bay is immediately revoked,” concluded Singh, MP.