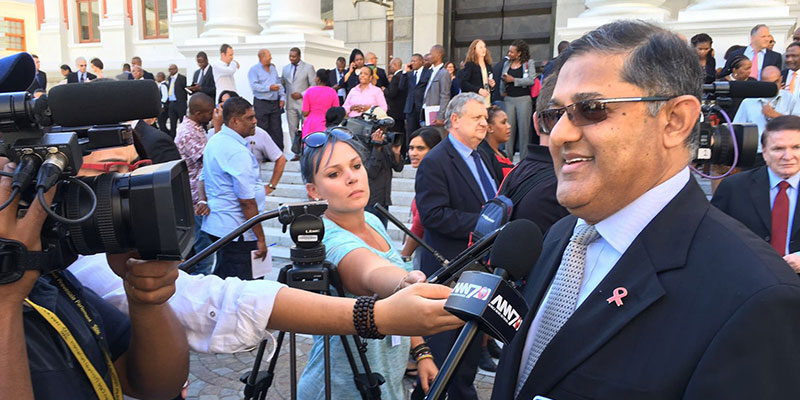 “The IFP welcomes the budget that was presented by the minister of finance today, given the current fiscal constraints, and the parameters he within which has to work, we think he did a pretty good job of ensuring invested confidence, making sure that on the revenue side the taxpayer will not be unnecessarily burdened with an increase in personal income and corporate taxes. The taxes that would contribute to the fiscus to make up the loss is largely taxes called Sin Taxes, custom excise duty a possible tire levy and a plastic bag tax, so not necessarily taxes that will hurt the pocket of the taxpayer.

On the expenditure side we believe that his emphasis on cutting the fat on curtailing expenditure to the tune of R25 Bn over the next 3 years is a step in the right direction, however actions speak louder than words, we in the IFP and parliamentarians in general have noted reports of the auditor general over the past 20 years where he’s reported on millions of Rand in irregular wasteful expenditure and of late corruption seems to be a cancer in our society. So all portfolio committees and all oversight committees at national, provincial and local government will have to be ever vigilant on expenditure and we really will have to sharpen our pencils and ensure that there isn’t fat it comes to public servants, we need to ensure that those public servants that are there perform their duties to the best of their abilities because a large chunk of the expenditure side of our budget goes towards paying public servants.

We also believe in the IFP that what the minister has done is he has delayed inevitable increases in taxes like personal income tax and corporate taxes and a possible rise in VAT by indicating that it will have to be considered in the outer years of the MTEF. An increase in 1% of VAT would have brought in the necessary income needed to balance our budget at this moment in time, and we believe that it might be a step that needs to be taken, although there is a concern about how it will impact on the poor, we believe as the IFP that it is the wealthy who buy the more expensive items that would be subjected to VAT. To cushion the impact on the poor what we need to consider is more concessions and zero rating on more items that currently exist that the poor consume. In that way there will be a cushion on the poor whilst getting the desired income.

We welcome the increases that will be made to promote small business, early childhood development we think this is a very positive step because we all know that education is in a mess in our country because we seem to be concentrating on matric results and tertiary education when really we should be starting to go back to basics. And it is early childhood development where children can be put through aggressive learning techniques that will help them in their outer years moving right up to tertiary education.

As far as the social grants are concerned R1500 which it would go up to, yes it was a necessary increase because those people that depend on social grants welcome every Rand that they receive. However I think in this area the IFP is concerned about abuse of the social grant system. There have been reports, numerous reports of abuse by officials within the agency that pays the grants (SASSA) and abuse by recipients as well and also of late abuse by certain companies that are debiting the accounts of these poor pensioners. And there have been a number of reports made to the minister but nothing seems to have been done and it is for this reason that the IFP, just yesterday called for a commission of enquiry and a commission to be a pointed to look into these unscrupulous people that fleece those that are recipients of social grants.”