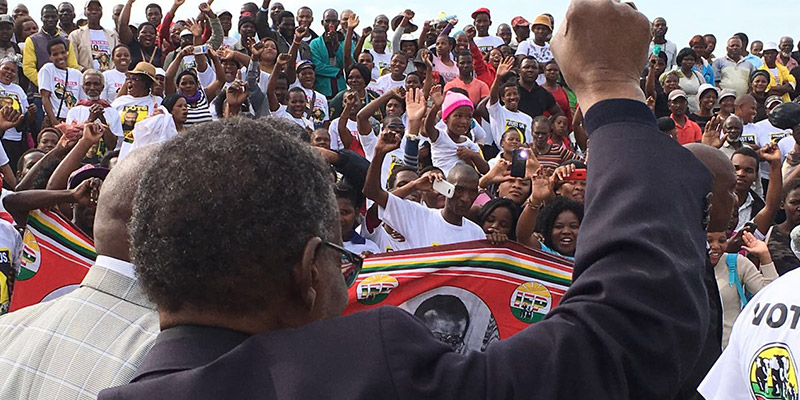 Friends, our country is burning. When factories and businesses were torched in Isithebe Industrial Estate a few months ago, we saw the very real evidence of failed leadership.

Never before have we seen the ruling party as fractured as it is right now. The effects of weak leadership at the top have shaken the whole organisation, setting member against member, and councillor against community. The pursuit of social justice and economic growth have given way to the pursuit of power and positions.

Service delivery has suffered. The economy has stagnated. And the ones to bear the cost are the people. You pay the price.

Protests against the ANC’s leadership are igniting across South Africa as angry crowds torch buildings, loot shops, block roads and shut down businesses. Community halls have been razed to the ground. A clinic has been destroyed. Municipal offices have been vandalised. Busses have been torched, as well as university buildings. Even fire departments have been burned.

The people’s anger is palpable and it demands a response. It is directed at a government that shows no respect for the people. And in response, government simply calls for calm. But what changes? Are they listening now?

Every party faced a difficult process of candidate selection for the 2016 Local Government Elections. Because we can only field one candidate per ward, the IFP experienced competition within our branches. The challenge we faced was to choose the best possible candidate from among the names put forward by our branches. In every competition, someone wins and someone loses. But when both are backed by our members and supporters, the outcome is a candidate that people respect and welcome.

It makes no sense to me to impose candidates on communities who don’t enjoy the support of the people. Why send you someone you don’t want? Many of the destructive protests of the past few months were not just about service delivery. Many were about dissatisfaction with ANC candidates’ lists. It was that dissatisfaction that saw factories burned down in Isithebe Industrial Estate. People were trying to get their leaders’ attention.

But as a result, the whole of Mandeni has suffered an economic setback. Jobs have been lost as factories and businesses close down. Families who used to enjoy an income are now struggling to put food on the table. We cannot continue down this path. Something must be done to change the trajectory of our country. Under the present leadership, there is no hope in sight of anything improving. When people distrust their own leaders, for good reason, the contract of governance is clearly broken.

These are strong words. But I have not come here to discourage you. I have come with a message of hope, because at this crucial juncture where change is so sorely needed, the power to effect change is being placed in your hands.

On August 3rd when you go to the polling stations and cast your vote, the power to fire and hire will be yours. You will decide whether to continue giving chances to a leadership that has failed you, again and again, or whether Mandeni will embrace a leadership you can trust.

Let me speak to you about that option. Do you remember when the IFP ran this Province? Do you remember seeing protests against us? No, because the IFP respects the people we serve. We listen to your voice and we act according to your mandate. We believe in governance from the ground up, and empowering communities to design their own solutions. We believe in partnering with people, engaging them in decision-making and asking for their input before we make policies.

The IFP’s goal is to see communities empowered, thriving and stable. We have pursued economic development for years, long before political firebrands adopted it as their mantra. Even during the struggle for political freedom, Inkatha insisted that freedom would be meaningless unless it was accompanied by the ability to participate in, and reap the benefits of, a growing economy.

We therefore coupled our fight for freedom with intensive development programmes, equipping people with skills, prioritising education, and assisting small businesses. We also pursued investment and industrial development, because we understood that getting people employed was the best way to keep them fed, clothed and secure.

As Chief Minister of the then KwaZulu Government, I ensured that our economic policies made it easy for business to thrive. As a result, factories were built and industries established that created countless jobs. Development pumped resources into our communities. Indeed, many of the factories in Isithebe Industrial Estate were established because Inkatha opened the door.

The IFP is still fighting for economic development. But when we speak in Parliament, in the Legislatures and in Municipal Councils about the need to put people’s needs first, it’s like swimming against the tide, because the waters of government have been polluted by corruption. Cadre deployment and tender fraud have compromised efficient service delivery, leaving you with substandard infrastructure and mismanaged municipalities.

Year after year, the Auditor General warns that municipal governance is close to collapse. That was never the case when the IFP administered the municipalities of KwaZulu Natal. So the question is obvious: why allow things to continue when change is possible? You have the option of bringing the IFP back. When you vote for the IFP, you vote for the full legacy of good governance. Our values have not changed. But we have become more focussed. The realities of the present demand it.

Our focus now is to restore integrity to governance. This is what our country needs. Here is Mandeni, you need a leadership you can trust. Think back on the IFP’s trackrecord. Think of what we did when we led this Province. We were on a path of development and growth. Much still lay ahead. The IFP is ready to pick up the ploughshare. We are ready to fix what others have broken. We are ready to place governance back on a positive path.

I invite you to partner with us and restore a leadership you can trust. Your vote is your voice. So use it on August 3rd to send a loud message. It is more powerful than burning things to the ground. It speaks louder than anger and violence. No one can ignore your voice when you vote for the IFP.