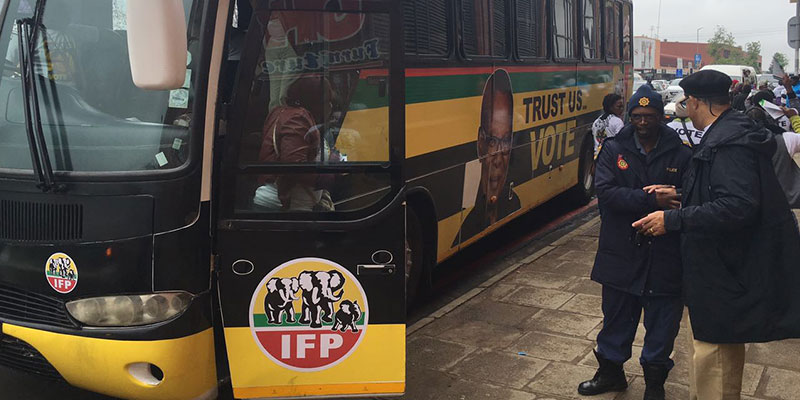 IFP Leadership Visits Umgungundlovu Ahead Of The 2016 Local Government Elections

With just one week to go to voting day, the sense of excitement is palpable. We are now in the final stretch. Next Wednesday, voting stations will open across South Africa and the electorate will speak through the ballot box. The power to decide what you want for the future is being placed in your hands.

I want to thank you for welcoming me and the leadership of the IFP, so that we can talk together about what these elections mean for your community and your future. This election is about local government. It’s about your municipality and about the people who represent your voice on the municipal council. It’s about getting you councillors who listen, respond, and act with integrity, so that your needs are met for the next five years.

The political landscape is changing in South Africa. It’s becoming more polarised, and the debate has become far more aggressive. We see leaders attacking one another, stirring up emotions, and making irresponsible statements. We see intra-party political assassinations, violent service delivery protests, and one allegation after the next.

The message being promoted is that the ANC is corrupt, and the DA is racist. There is a great deal of political rhetoric being bandied about. In response, voters are showing high levels of distrust. The most amazing thing now is that the DA leader has said that smaller parties should not be supported by the voters. This is the extent to which the DA has always regarded smaller parties with contempt. We are a multi-party democracy. No one ridiculed Mrs Helen Suzman when she was a lone voice in Parliament during the Apartheid era.

We are elected by South Africans whose voice must also be heard. This election cannot be a two-horse race between the ruling Party and the DA. No wonder that we have also received members from the DA, who have been sickened by their arrogance.

Who do you trust when these are your options? Who is telling you the truth? And who is genuinely committed to serving your needs?

I invite you to step outside the heat and dust of all this politicking, and consider an alternative. There is still a party you can trust to talk straight, govern well and focus on what matters. The IFP has been serving South Africa for 41 years. You know me and I know you. We have walked a road together that saw us emerge into freedom well-prepared to take the reins of governance. We did so with experience, skill and integrity. We did it well.

The IFP has administered government at national level, provincial level, and in many municipalities, both local and district. We have a long track record of clean, efficient governance. So when you vote IFP, you are voting for a leadership you know and trust. We may not have the most money. We may not be the biggest. But we have something far more valuable. We have integrity.

That is something sorely missing in South Africa’s political leadership. And the result is weakened governance. We therefore need to vote with our heads, considering the facts and judging the track record of each party. The facts are quite simple. Since 2011, for instance, an ANC-led government has lost R4,48 billion to unauthorised, irregular and wasteful expenditure. The Auditor General’s reports provide a picture of failing municipalities, dominated by weak leadership and financial mismanagement.

Is that a track record you want to support? Because when you vote for a party that has failed to deliver, you are buying your municipality five more years of service delivery failure. It’s that simple. Parties don’t prove themselves by their promises. They prove themselves by their actions. The IFP has worked to earn your trust. When we ask for your support, we do so because we know we can serve you.

But there are those who are asking for your vote for other reasons. To consolidate power. To save face. To fix fractures in their party. To get a foothold into power. Clearly they have misunderstood the reason for voting. Your vote is your voice. It expresses your mandate. It’s intended to get you the best leaders for the job of creating good governance.

This is why the IFP works through partnerships. We partner with communities to find solutions, drive development and improve lives. Our candidates are people who are already working for you; people you chose and people you trust. Once they become your councillors, we hold them accountable for the full five years of their service. We give them our full support, but we hold them to a high standard, because they are serving under the banner of a party that believes in putting the people first.

With the IFP you won’t get empty promises. You won’t get mud-slinging and political point scoring. You’ll just get clean, efficient service that meets your needs. That is something you can bank on.

No wonder more and more people are making their home in the IFP. Since 2011, the IFP has grown in numbers and unity. We have welcomed back thousands of members who tested the waters in other parties, and were disappointed. They have come home to the IFP and are making their contribution in a party that values their voice. We have also welcomed streams of new members who are seeking a leadership they can trust.

With this growing support, the IFP has seen victories in one by-election after the next. We have seen support increase and we have won wards, even taking wards away from the ANC. Moreover, the electorate has restored the IFP to governance in five municipalities, having rejected the coalition of the ANC and NFP. The message from voters is clear. You have had enough of the politicking. It’s time for real service.

This is the time of the IFP. Analysts, journalists and ordinary citizens are predicting a strong showing for the IFP in 2016. I pray that they are right, because a stronger IFP will mean better governance for all our people. I want to see a leadership of integrity restored to local government, so that municipal councils will function effectively and councillors will be responsive to the needs of the people.

On August 3rd, one week from today, we can change the way things are done in Umgungundlovu. We can get government working, and working for you. So get out and vote next Wednesday. Vote for the party that you can trust. Vote IFP!