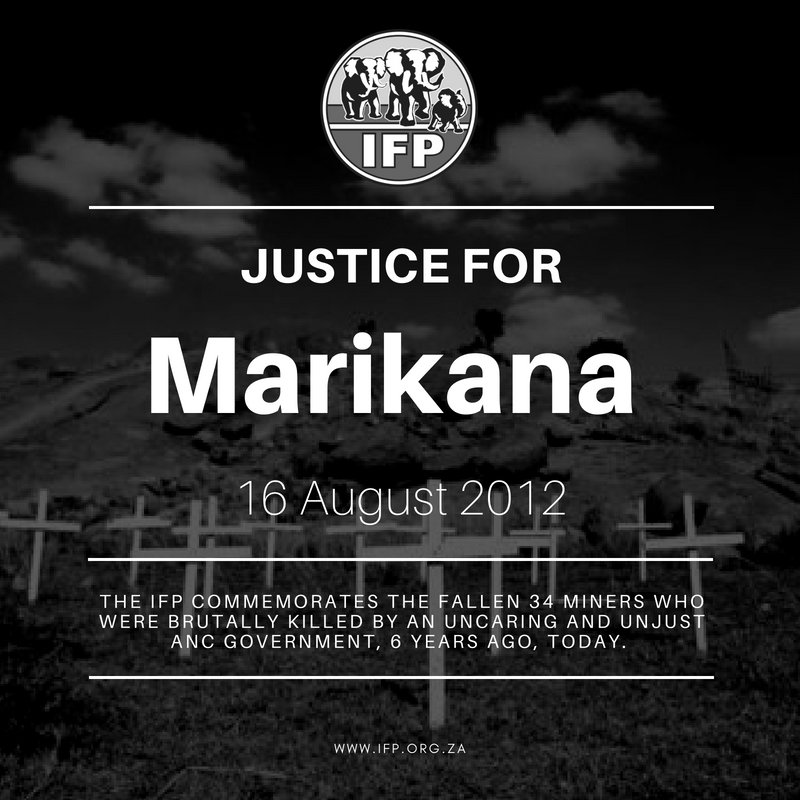 IFP: Looking Back at Marikana

The Inkatha Freedom Party commemorates the fallen mine workers of Marikana that were killed in cold blood, while trying to surrender, most being shot in the back.

The 16th August 2012 will go down in infamy in South African history as the single most lethal use of force by South African security forces against civilians since 1960. It claimed the lives of 44 people including four security guards, two police officers and four bystanders. 78 people were wounded and 275 arrested.

Six years after the tragedy, and whilst the residents of Marikana still live in the most abject of poverty, not a single police officer is in the dock for these brutal killings. The IFP demands justice, we demand that the IPID prioritize and conclude their investigations, and that those police officers involved be formally charged by the State.

The states excuse for the delay in justice being meted out in the matter is predominantly one of not having sufficient budget for the necessary crime scene reconstruction and forensic investigations.

The IFP cannot and will not accept this! The State has more than ample funding, just look at billions of rand’s worth of bail-outs that are continually provided by the state to rescue incompetent and corrupt state-owned entities. It is a travesty of justice that there has been no priority accorded to the closure of this tragic incident for the families of those killed.

The ruling party must take a long hard look at itself in the mirror and decide if it is here for the people of South Africa or solely for the self-enrichment of its own small elite. The IFP will never accept such injustice.