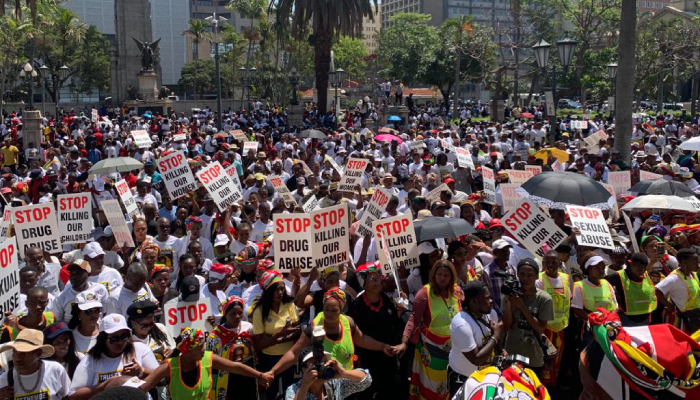 STATEMENT BY
THE HON. MR VELEKOSINI HLABISA MPL
PRESIDENT OF THE INKATHA FREEDOM PARTY
AND LEADER OF THE OFFICIAL OPPOSITION IN KWAZULU NATAL

As I look at this gathering of patriots, standing in unity for the vulnerable and the voiceless, I am overcome by a sense of hope.

I wish beyond anything that the countless women and girls whom we remember today could see us standing united on their behalf. I wish that those who have been taken from us, brutally and without reason, could feel our solidarity and our love. I know that they would stand here with us, raising their voices with ours, in a cry of “NO”.

Today all the structures of the IFP have gathered with one cause. Our Women’s Brigade will deliver our petition to the Government of South Africa, with the full support of our leadership, our Youth Brigade, our Councillors, our branches and our supporters. The IFP speaks with one voice against this terrible evil.

I am here today as a leader, but also as a father and a brother. Every girl is my daughter. Every woman is my sister. I will protect them with my life.

It pains me to know that South Africa is one of the most dangerous countries for women and children to live in. This is our country. These are our people. And they are being hurt and slaughtered.

We have said, “Enough is enough”. We have asked “Am I next?” In my own heart, the word that echoes against gender-based violence is simply “NO”.

This cannot happen. It must be stopped.

Today we are calling on our Government to stop their empty rhetoric and to start doing what needs to be done. There is an alarming disjuncture between what our women endure, and what our Government does in response. Action has been wholly inadequate.

Years ago, we were promised a National Council Against Gender Based Violence. This came to naught. Year after year, we are promised interventions to fight gender-based violence, but again most of it came to naught.

Even during this year’s State of the Nation, and again at the Joint Sitting in September, President Ramaphosa promised funds for shelters and for victim assistance and for proactive steps to protect our women and children. And we are yet to see those Rands and Cents materialise.

The IFP has been very vocal on what is needed –

Our voice today is the voice of South Africa. I want to thank every citizen who has taken to the streets, not only today, but in many marches and protests across our country, to highlight the plight of our people.

We must stand united in our resolve to fight this evil that has gripped our country.

In my capacity as the President of the IFP, I have tasked the rank and file of our Party, every councillor, every mayor, every MP and MPL, to prioritize the fight against gender-based violence. There is nothing more important than protecting our people. That is the IFP’s commitment.

Right now, South Africa is a war zone. Our people stand ready to fight. But we need our Government to step onto the battlefield.

Together, our “NO” must be heard.