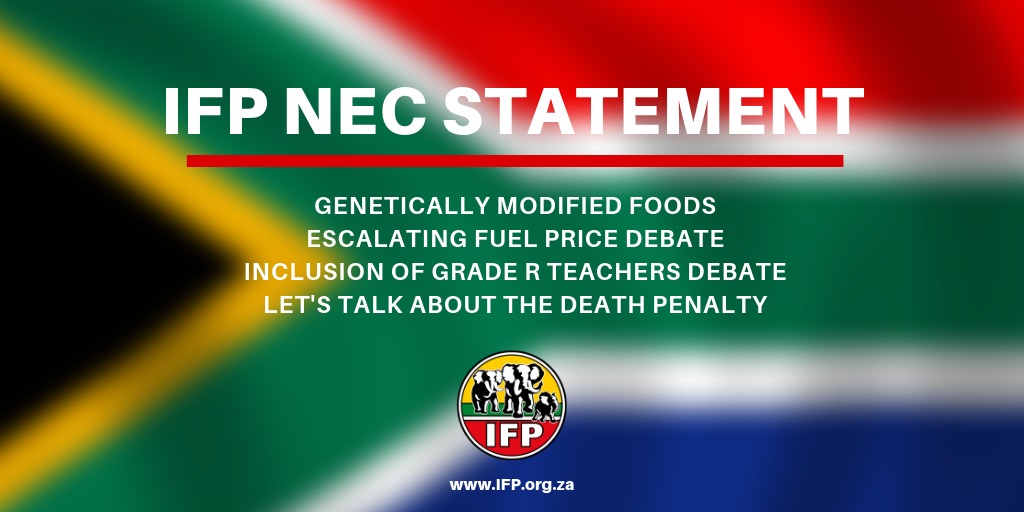 The IFP believes that the right to health includes the right to know what we are consuming and whether we are exposing ourselves to health risks through our diet.

We have therefore followed, with growing concern, the international debate on the use of the herbicide Glyphosate in the agricultural sector, as evidence has emerged that Glyphosate causes Cancer.

A number of cities, counties, states and countries throughout the world have taken steps to either restrict or ban glyphosate, the active ingredient in Monsanto’s Roundup weed killer. Why is South Africa not taking any active steps to interrogate this matter and protect our crops and more importantly our people from this cancer-causing ingredient?

The IFP notes that Prince Mangosuthu Buthelezi MP has written to both the Public Protector and the South African Human Rights Commission to investigate the use of Roundup weed killer on our crops, yet to date we still await the outcome of these investigations.

The NEC further notes that in August a man in the United States who claimed herbicides containing glyphosate had caused his cancer is to receive $289m.

It is the first lawsuit to go to trial alleging a glyphosate link to cancer.

Jurors in San Francisco found that the company’s weedkillers contributed “substantially” to the terminal illness of groundskeeper Dewayne Johnson.
Mr Johnson was diagnosed with non-Hodgkin’s lymphoma in 2014. His lawyers said he regularly used a form of RangerPro while working at a school in Benicia, California.

The ruling said the potential risks of the product were known by the scientific community and Monsanto failed to “adequately warn” of the danger.
Jurors found that the company had acted with “malice” and that it should have provided a label warning of the potential health hazard of its product.

For a number of years, the IFP has urged Government to consider the health and safety of genetically modified foods, particularly in respect of long-term human consumption. Unfortunately, Government has been largely unresponsive.

Glyphosate, which was classified as “probably carcinogenic to humans” by the World Health Organization’s International Agency for Research on Cancer (IARC) in March 2015, is hotly contested in Europe – over 24 countries in the world have banned the use of this product.

If Government is unwilling to explain why South Africa is feeding its people toxins, thus feeding the Cancer pandemic, and the Public Protector is unresponsive in the face of this crisis, one would hope that the SAHRC will stand up for the right to health and life.

On the escalating fuel price:

On Wednesday, 12 September 2018, the IFP will lead the debate the effects of the escalating fuel price increase and call for the suspension of the general fuel levy in order to bring some relief to millions of motorists and commuters.

The NEC notes that the decision by the Speaker of Parliament, Ms Baleka Mbete in acceding to our request to schedule a Debate of Urgent National Importance on this matter.

IFP Spokesperson on Finance, Mkhuleko Hlengwa MP will lead this debate in Parliament and provide further details during the debate.

The NEC notes with serious concern that our countries economic woes continue to worsen and news of an economic recession has caused our currency to depreciate by 20% against the US dollar this year. The weakening rand will increase the cost of living for a majority of South Africans.

Last week, StatsSA announced that South Africa’s real gross domestic product (GDP) decreased by 0.7% in the second quarter of 2018, following a decrease of 2.6% in the first quarter. Millions of South Africans are severely affected by this economic slump due to the ANC’s clear lack of sound economic policy and low investor confidence.

On Wednesday, 12 September, in a debate on the recession, the IFP will reiterate our calls on President Cyril Rampahosa to table an urgent recovery package in Parliament and address the Nation, business leaders and investors to ease the markets anxiety and to save the Rand.

The NEC notes that this week in the National Council of Provinces (NCOP), the IFP-led motion will be debated on the inclusion of Grade R – reception grade – teachers into the budget for the Department of Basic Education.

The IFP will argue for the inclusion and migration of Grade R and ECD teachers into the Department of Basic Education from Social Development.

IFP permanent delegate in the NCOP, Hon. Mntomuhle Khawula MP, will lead the debate and provide further details during the debate,

On debating the Death Penalty:

The NEC notes the overwhelmingly positive response by thousands of South Africans in talking about the reinstatement of capital punishment.

IFP Chief Whip in Parliament, Hon. Narend Singh MP, will continue to engage South Africans on various platforms in order to start a conversation on ways to deter crime in our society.

In a statement released last week, by Hon Singh MP, the NEC echoes the sentiments expressed by many South Africans in that we feel that government should at the very least open this matter up to the national discourse for discussion by our citizens in a process akin to the recent Constitutional Review Committee process on expropriation of Land.

Let’s talk about the death penalty, let’s talk about hard labour in our prisons without the chance of early parole for violent contact crimes, let’s have this discussion and we call upon government to immediately facilitate such national process of discourse.

South Africans no longer feel, nor are safe. It is the duty of the State to ensure that all citizens are protected and kept safe.

We wish to extend our deepest condolences to the families, friends and colleagues of the three Johannesburg fire-fighters who tragically died while battling a blaze at the Gauteng Provincial government building in downtown Johannesburg, last week.

We condemn the inaction of the ANC-led Gauteng Provincial government on this matter.

It is entirely reckless and unresponsive of the Provincial government which failed to listen to public service workers, unions and departmental officials in ensuring that public servants are able to conduct their service to our country and their respective province in an environment which is safe and secure and free of any health risks.

The Gauteng Provincial government has once again failed the people of Gauteng and has shown utter disdain for the lives of others. We have seen with Life Esidimeni the implications of a government turning their backs on its people.

May this tragedy never be repeated.

Our sympathies and prayers go out to all public servants injured during the blaze and the brave men and women in the Johannesburg Emergency Services placing their lives at risk on a daily basis to ensure the residents of Johannesburg at large are safe.

On Water restrictions to be eased for Cape Town:

The NEC welcomes the announcement by the City of Cape Town in easing water restrictions as dam levels reach near 70% full.

The unjust tariff increases are set to be undone by the City up to 70% per kilolitre. This is certainly to be welcomed as these tariff increases have made it almost impossible for Capetonians and businesses to get by every month to make ends meet.

The NEC will monitor the implementation of the reduction of tariffs in Cape Town and we continue to encourage all South Africans to use water sparingly.

The NEC wishes a Happy Rosh Hashanah to all our Jewish brothers and sisters in South Africa and abroad. May you be inscribed and sealed for a good year and may it be filled with health, happiness and love.

The contribution of goodwill by the Jewish Community in South Africa have for decades contributed to building our society, reconciling with our past and truly builds on our principles of Ubuntu.