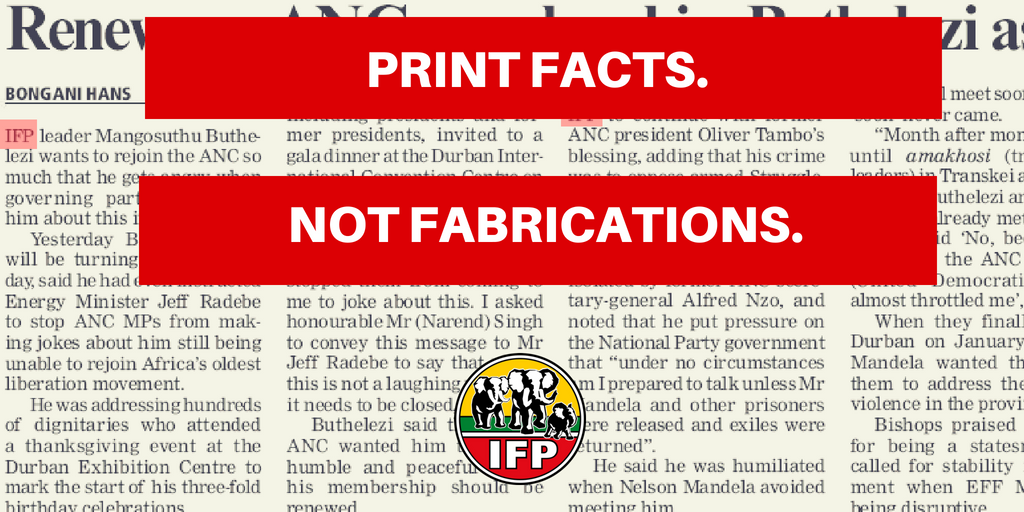 Note to Editors: This statement intends to clarify that Prince Buthelezi never called for his ANC membership to be reinstated.

In today’s report Mr Hans alleges that “Buthelezi said if the ANC wanted him to have a humble and peaceful death, his (ANC) membership should be renewed.”

The NEC dismisses this claim by Mr Hans with the contempt it deserves because it is designed to sow confusion within the rank and file membership of the IFP in particular, and among South Africans in general.
We challenge Mr Hans to produce evidence to validate his claim.

Importantly the main issue which was at the heart of the Prince Mangosuthu Buthelezi’s message as raised yesterday, at the Thanksgiving Service to mark the 90th Birthday of Prince Buthelezi, was the long standing issue of reconciliation between the IFP and the ANC.

The rift which has existed since 1979 between the IFP and the ANC is well documented; and since the release of Mr Nelson Mandela and other political prisoners from prison in 1990 serious attempts for meaningful reconciliation have been pursued by the IFP in the face of a non-committal ANC.

The fact that Prince Buthelezi was a member of the ANC is a matter of public record which is well documented and is not up for debate as Mr Hans seeks to suggest in his poisonous reporting.
In this regard, the ANC as the architect of the intense vilification against Prince Buthelezi owes it to posterity to clear the name of Prince Buthelezi; and this in no way suggests that the Prince wants his membership of the ANC reinstated because after all Prince Buthelezi never left the ANC, it is the ANC that left him.

The IFP supports Prince Buthelezi in his efforts to place the reconciliation matter on the agenda yet again.

The IFP remains committed to lasting reconciliation between the two Parties.

We call on the ANC to meet us halfway and bring the reconciliation agenda to a logical conclusion.