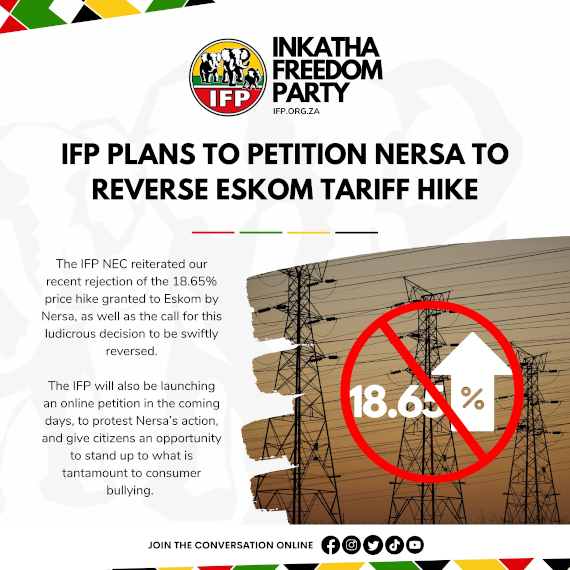 IFP NEC Statement on Priorities for 2023

The Inkatha Freedom Party (IFP) National Executive Committee (NEC) held its first meeting for 2023 yesterday. In preparation for 2024, a number of internal priority matters were discussed to ensure election preparedness and readiness, but all were overshadowed by the ever-present elephant in the room: Eskom and the ever-escalating periods of loadshedding and rolling blackouts.

The IFP continues to be deeply concerned about the current state of affairs at the energy utility, which is leading to the literal collapse of South Africa. Load-shedding is no longer an occasional inconvenience, but has quickly become the new normal, devastating lives and businesses across the country.

As a party, we are committed to being part of the solution and will continue to explore all avenues in relation to Eskom.

For this reason, we attended the meeting of leaders of political parties in Parliament, convened on Sunday by President Cyril Ramaphosa. The IFP was represented by our founder, President Emeritus and Leader of the IFP’s Parliamentary Caucus, Hon. Prince Mangosuthu Buthelezi MP.

In addition, the IFP will be joining the current Court action seeking to hold government directly liable for their part in the energy crisis. We fundamentally believe that there has been a clear dereliction of constitutional duties on the part of government. They accepted the responsibility of operating the country’s sole state-owned energy provider and must, in turn, be willing to accept responsibility for – and the consequences of – their actions and inaction.

The IFP will also join the multi-party protest action planned for 31 January in Gauteng, as well as hold an IFP protest march in KwaZulu-Natal in Durban on 3 February 2023.

Eskom and government have failed the nation.

Further, the IFP NEC reiterated our recent rejection of the 18.65% price hike granted to Eskom by Nersa, as well as the call for this ludicrous decision to be swiftly reversed. The IFP will also be launching an online petition in the coming days, to protest Nersa’s action, and give citizens an opportunity to stand up to what is tantamount to consumer bullying. These irrational, unreasonable increases will be crippling to millions of consumers, and could deliver the final death blow to hundreds – if not thousands – of SMMEs.

Energy will remain the IFP’s focus for the foreseeable future, with the IFP’s Energy Task Team continuing with its work and due to report back to the NEC in February 2023.
—
Contact
Mkhuleko Hlengwa MP
IFP National Spokesperson
071 111 0539 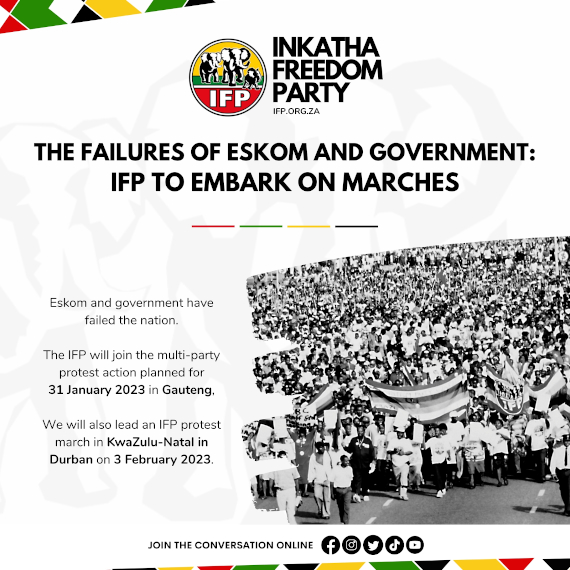