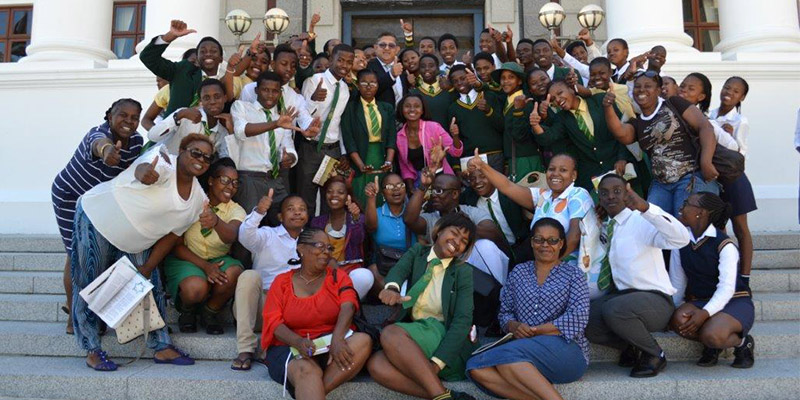 Learners from grades 8 to 12 at Lindelani’s Umtapho High School in KwaZulu Natal, were hosted by IFP Chief Whip in Parliament, Mr Narend Singh, MP, earlier today when they visited the parliamentary precinct in Cape Town.

The learners were conducted on a full tour of parliament before meeting with Mr Singh, MP, in the National Assembly and were then able to engage with him in an informal questions and answers session on the steps of the Assembly. Learners from Rebone-sediba Intermediate School in North West joined the session and also had the opportunity to engage with Mr Singh, MP.

Umtapho High School learner, Prince Mkhabela said, ”I have learnt a great deal today. I have a better understanding of how parliament operates. The technology in the national assembly is very impressive, especially the way in which languages are translated through the ear phones. This is the people’s parliament”.

Thandeka Tshabalala, a grade 12 learner said, “I am impressed by the size of our parliament and by the information I gained from this visit. One day when I have completed my studies I hope to be a Member of Parliament”.

The parliamentary visit concluded with the learners and teachers from both schools being provided with lunch and light refreshments courtesy of the Inkatha Freedom Party.