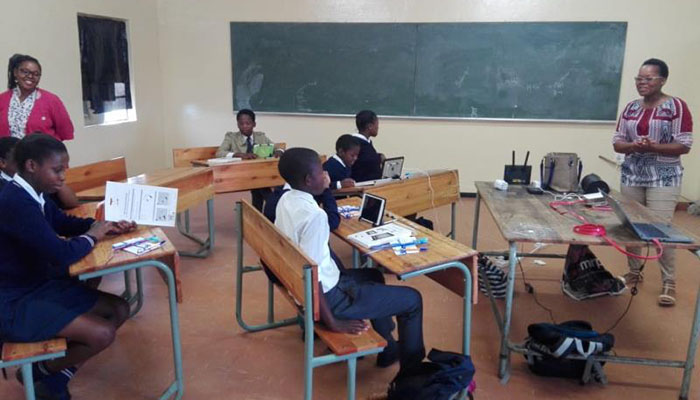 Today, accompanied by IFP Members of the KZN Legislature and IFP local leadership, Hon Hlabisa donated 200 pairs of school shoes and 1200 packs of sanitary pads to most needy Iearners. This school achieved a resounding 61% matric pass rate for year 2019 from 45% in 2018.

President Hlabisa pledged R20 000 for a learner who will achieve good results for a 2020 matric class. “Growing from the humble surroundings in Hlabisa area and studying in local schools I know exactly what it feels like to have a torn pair of shoes at times one was compelled to put newspapers inside shoes. For a long time girl children has not reached their full potential academically as they were compelled to absent themselves from school because they didn’t have sanitary pads. This is a gesture that says IFP cares” said Hlabisa

Mbambangwe headmaster Mr Sibongiseni Xulu praised Hon Hlabisa for visiting the school October last year to motivate learners and claimed that his visit has contributed to the improvement of matric results.

Meanwhile President Hlabisa has condemned the shooting of Buhlebethu C.P School teacher at Inanda Newtown saying the IFP has been calling for improved security measures in schools as criminals are terrorising teachers and learners. The teacher was shot on Wednesday within the school premises in a incident believed to be a well orchestrated robbery.