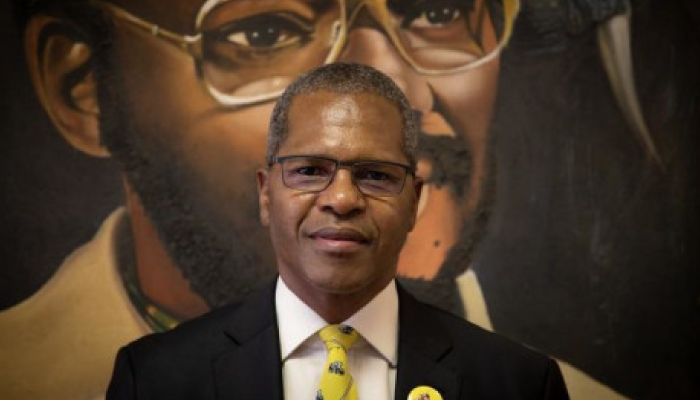 The IFP President, Hon. Velenkosini Hlabisa, clearly outlined that his party is anti-xenophobic but cited that the IFP is totally against prioritising foreigners when it comes to jobs and housing issues. He said this while embarking on his by-election campaign trail, which he kick-started at Albert Park and Dalton under Ward 32 in eThekwini. The IFP is represented in these elections, set to take place on 11 November 2020, by its loyalist, Mthembiseni Thusi.

President Hlabisa said this after some of the Maud Mfusi Street – formerly St George’s – residents told him they were evicted from their residential flats in favour of foreign people. He condemned this and urged locals to vote in the IFP to change the status quo. He said service-delivery and other basic needs should be provided to locals.

President Hlabisa, who was welcomed by Amabutho’s chants in Dalton Hostel, encouraged the voters to vote for the IFP, a party with a corruption-free record.

He told them to give Thusi the full right to be their mouthpiece, as he had been through thick and thin with them. “It is a disgrace that after 26 years of democracy in South Africa our people are crowded in small rooms with no privacy at all. It is high time you give IFP an opportunity to give you houses that will bring dignity back to you and your families”, said President Hlabisa.

He was shocked to witness the appalling and squalid living conditions, as some women are staying in a beer hall-like dormitory structure. This structure – lined with beds, with dark interiors even in broad daylight – is characterised by a stench that provokes you from a distance, as well as slippery floors and garbage dripping from bins.

He promised the women living in this structure within the hostel that if they could trust the IFP with their vote, their living conditions would improve for the better.