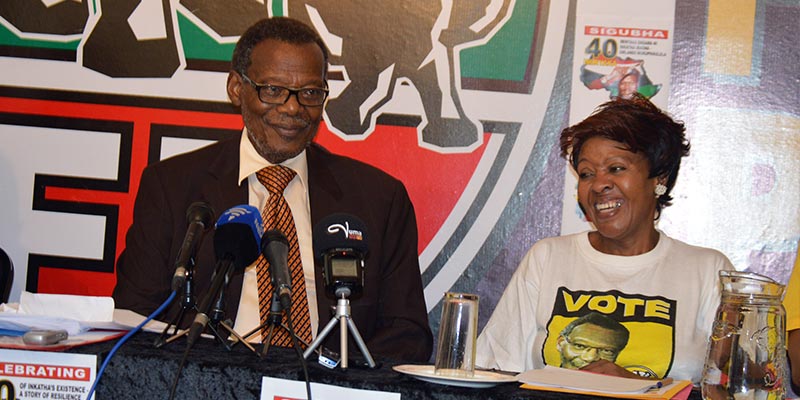 Thank you, ladies and gentlemen of the media, for joining us today. I know that there are some in this room who have walked a long road with the IFP.

You have written about us many times over the years. The more seasoned among us may have written about the IFP when it was still Inkatha, in the years before the unbanning of political parties when we operated as a national cultural liberation organisation.

A few in this room may even have penned one of the countless obituaries that have been written for our Party over the years. To you, let me say “No hard feelings”! It would be hard to imagine any other party withstanding the onslaught the IFP has faced over several decades, and surviving.

Considering how vilified I have been, how determined the ruling party has been to destroy us, and how much politics has become a game of money, it is certainly remarkable that the IFP has survived.

But we have. And in many ways, we have thrived. Indeed, we remain a national party, represented in Parliament, in two Legislatures and in various municipalities. At all levels of governance, the IFP remains a voice for the people of goodwill. Our principles have retained relevance. And we are still driving critical debates in South Africa.

For all these things, the IFP is grateful. We are well aware that much of it has been about hard work, endless sacrifices, constant perseverance and strong leadership. I give credit where credit is due to the many strong leaders in my team, and the many more who served South Africa in the IFP and in Inkatha since our inception. But, still, we recognise that that is not the whole story.

In politics, there are many who have worked hard, and no longer exist. There are those who have been swallowed up by bigger parties, and others whom history simply moved past. There is something more to the IFP’s continued presence on the political landscape than sheer gritty determination. We believe it is by God’s design, by His grace and certainly by His strengthening that the IFP is able to look back on 40 years, and know that there are more ahead.

On 21 March 1975, we founded Inkatha yeNkululeko yeSizwe at KwaNzimela in KwaZulu. We established it on the principles of the founding fathers of our liberation struggle, among whom was my uncle, Dr Pixley ka Isaka Seme.

Inkatha was intended to reignite mobilisation among the oppressed majority in the hiatus left by the banning of political parties. From the very beginning, we spoke equality, freedom, negotiations and peaceful resistance.

But by no means did we lack fire. Indeed, I quickly became one of the most talked about political figures in South Africa, giving your predecessors much to write about!

Now, four decades later, the IFP has much to celebrate and many milestones to remember. We have victories under our belt, and tragedies. We have known exceptional people within our midst, whose legacy continues. But we have also lost many along the way, countless of whom fell to the People’s War, and some who fell away through betrayal, misplaced ambition or poor judgement.

In 2015, the IFP remembers this history. As we mark our 40th anniversary, we will have opportunity to speak about all that is past, knowing that it is our foundation for all that is to come. Last year we set up a 40th Anniversary Committee, chaired by our Treasurer General, to prepare a programme of events celebrating 40 years of the IFP.

It was felt that we should begin where Inkatha began; at KwaNzimela. Where we began by asking for the Lord’s guidance, we now return to thank Him for answering our prayer. On 21 March 2015, the IFP will hold a thanksgiving service at KwaNzimela. We have invited representatives of various political parties, religious leaders, traditional leaders, and party members, both current and past, to witness our expression of gratitude for the longevity of the IFP.

During this service on Saturday, we will also honour the memory of Bishop Alphaeus Zulu, a founding member of Inkatha and a personal friend, and we will lay a wreath at his tombstone.

This is but the first of several commemorative events and celebrations the IFP will hold in 2015. Our second event will be a gala dinner, to which we have invited national and international friends of the IFP, and significant figures who have witnessed the IFP’s journey over four decades. This will be our main event, the date and venue for which will be announced in the next few weeks.

The month of June will see the IFP Youth Brigade driving 40th anniversary events, including lectures at institutions of higher learning, a colloquium and various youth activities. In August, we hand the reins to the Women’s Brigade who will mark this milestone anniversary with a number of initiatives centred around the value of women as leaders in South Africa.

I am pleased to announce that 28 August 2015 marks the official opening of the Prince Mangosuthu Buthelezi Museum and Documentation Centre, in Ulundi.

This centre, established by the Party, will be an archive of historical materials and information relating to my own almost seven decades of political and public life.

Ladies and gentlemen, all these events will culminate in a massive rally in the latter part of 2015. At this rally, we will focus our sights on the years ahead, for we believe there will be many more for the IFP. South Africa has changed, and we have changed with it. But at our heart, we are the same, and we will move into the future as a known entity that all South Africans are able to trust.

With that, I wish to invite you to join us at KwaNzimela on Saturday, and to thank you again for coming today.