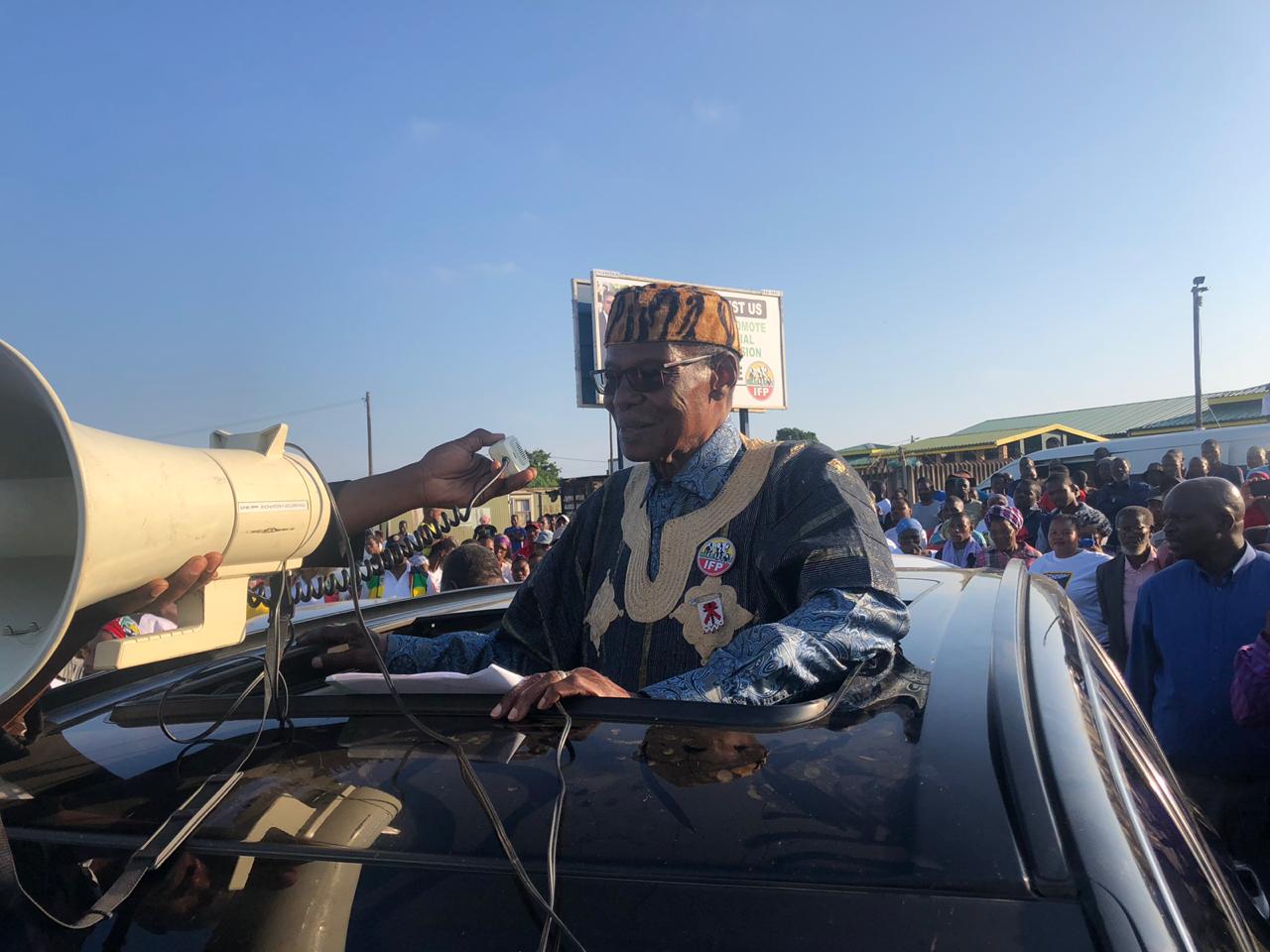 IFP rally in Empangeni in celebration of Workers’ Day 2019

In a country where millions of people are unemployed and jobs are scarce, we don’t often talk about workers. But without a strong workforce, we could never achieve the economic growth that will create greater employment. If we want to solve the problem of joblessness, we need to protect and champion our workers.

I am pleased to be in KwaMthethwa this morning to celebrate Workers’ Day. This celebration comes at a pivotal moment in our country, for a week from now we as South Africans will have the chance to vote. We will exercise our democratic right to choose our own representatives, and we will decide who can be trusted to govern our provinces and govern our country.

For months on end I have been travelling to every corner of our country to share a message of hope, and a message of change. This election campaign is almost finished. In a few days’ time, politicians will wrap up their speeches and parties will close their campaigns. They will have done everything in their power to convince you that this or that party is the right choice.

Then, it will be up to you. Every voter will need to make a decision. On Wednesday the 8th of May, 7 days from now, the electorate will go to the voting stations and cast our future in stone. You will decide, through your votes, whether our nation will be plunged deeper into crisis, or whether change will come to rescue South Africa.

But if you give your vote to the IFP, you are going to get solutions. You will get honest leaders. You’ll get clean governance. Principled leadership. Social justice. Economic development. Genuine hope, and change. This is a certainty. It is backed by 44 years of evidence, because as long as the IFP has served South Africa, we’ve been building a legacy of integrity.

So when the IFP campaigns for local economic development, we’re doing it from a foundation of experience. We know how to achieve it. We know that it takes partnerships between the public and the private sector. We know that Government’s fiscal management needs to become more efficient and transparent. We know that small, medium and micro enterprises need to be supported and that investment must be prioritised.

But we also know that there are practical issues faced by entrepreneurs, workers and job-seekers that must be resolved. Simple issues, like a lack of transport, the cost of petrol and the high cost of data; these things affect the bottom line. How do you email your CV when you don’t have data? How do you market your product if you can’t get online, or process orders when you don’t have a delivery vehicle?

I will never forget one of the biggest obstacles faced by young entrepreneurs. Prior to democracy, black South Africans could not access loans from commercial banks. So we couldn’t get seed capital to launch a business, pursue a project or take an idea to market. No matter how savvy the entrepreneur and how brilliant their business proposal, they came up against the wall of finances.

I knew that this had to change. As Chief Minister of the then KwaZulu Government, I established Ithala Bank to give seed capital to black entrepreneurs. Suddenly small businesses began to flourish, cooperatives became viable, land was purchased for farming, and jobs increased. If you ask any successful business person how they got where they are, they will tell you about their first big break.

We need to create that first big break on a massive scale throughout South Africa. We need to open opportunities, for skills development, the exchange of ideas, and the growth of markets. Like we did during apartheid, we need to find that thing that is holding us back, and fix it. There is always something that can be done. It just takes the right people, with the right vision, and a lot of integrity.

The IFP knows how to get our nation working, so that we can alleviate poverty, redress inequality, empower families, and fulfil the rightful aspirations of all South Africans. To achieve this, we need to create an inclusive economy as an absolute priority. This is about human dignity in 2019 as much as it was about human dignity 25 years ago.

I will never forget the insightful words of Mr John Kane-Berman, the then Director of the South African Institute of Race Relations. He said, “Apartheid rests on the fundamental absurdity that one can make use of blacks as labour, but deny their existence as people.”

At that time, blacks were excluded from trade unions because the definition of “worker” in the Industrial Conciliation Act did not include black workers. So I became a champion of the rights of black workers.

I petitioned then then Prime Minister, BJ Vorster, to establish black trade unions. Together with Professor Lawrence Schlemmer, I founded the Institute for Industrial Workers, because I understood that trade unions were not only necessary for the protection of workers’ rights, but that they could wield significant political influence.

Under my leadership, the KwaZulu Government became deeply involved in the big strikes which took place in Durban in 1973, which became a turning point in labour relations in this country. Because of my efforts in support of black workers I was awarded the George Meany Human Rights Award by the largest trade union in the world, the American Federation of Labour in the United States of America.

One of the cornerstones of my fight for workers’ rights was the call for a minimum wage, so that our people could survive in dignity from the work of their hands.

I know that there are many jobs in which people are abused, earning less than they deserve and being required to work outside the prescripts of our labour laws. This is wrong. No one deserves to be exploited, even in a struggling economy, even when unemployment is high and people are desperate for jobs.

On Workers’ Day, we need to focus attention on strengthening our workforce, understanding that it consists of individual human beings with their own aspirations, their own unique circumstances and their own contribution to make. People should never be treated as commodities.

I know that the unemployed in our nation often feel like a statistic; like a faceless number, among millions who are seeking work. But workers can be treated in that same way. The dignity that work is meant to provide can be stripped away when people are treated unfairly.

I want to acknowledge the workers in our nation, for they are building the economy and making South Africa productive. I also want to acknowledge the many unsung heroes and heroines who are working without pay or for very little, as an act of social service. We have countless NGOs operating in our country, doing the work that government is supposed to do, but without any government support. Then there are people who are not part of any NGO, who are quietly taking care of those in need.

Last week I had the privilege of witnessing the handover of a house to a destitute family in Nkandla. I have attended many of these functions, and I am always moved to see how people take care of each other. This family, specifically, saw a woman caring for a disabled young lady, despite not having two cents to rub together.

That is ubuntu botho. That is what makes our nation great. We are a nation of workers, even when unemployment is so high. Many South Africans, particularly women, work hard every day but earn little or no income. They build houses, cook meals, make clothes, till the soil, fetch water, look after children and do the endless tasks that are demanded when one lives in constant need.

Many of our mothers and grandmothers go to sleep at night completely exhausted. Yet they don’t earn a cent for what they do.

This makes it a hundred times worse when those who are in positions of responsibility, particularly in public service, neglect their work, mismanage what they are given and even take more than is owed to them through corruption and theft.

Corruption has destroyed our economy. South Africa’s economy should have grown enough by now, after 25 years, to support extensive training programmes and skills development projects, so that all our people who are able and willing to work, can find a paying job.

But because of corruption, the economy has collapsed. Economic growth has become stagnant, so that jobs are being lost instead of created. The vast network of social grants will never be sustained if we don’t grow our economy. We are sitting on a timebomb. The threat of junk status is real. So too is recession, disinvestment, the looting of banks, and the evil of State capture.

We are living in the shadow of all these things, and that is not where we belong. We belong in the sunshine of a strong democracy, with clean government, honest leaders and real delivery. That is not going to materialise out of nothing. We need to do something to achieve it. We need to get corruption out of power and restore integrity to leadership.

So today, as we celebrate Workers’ Day, I ask you to make a good decision. A week from today, when you go and vote, vote for a leadership of integrity. Vote IFP!