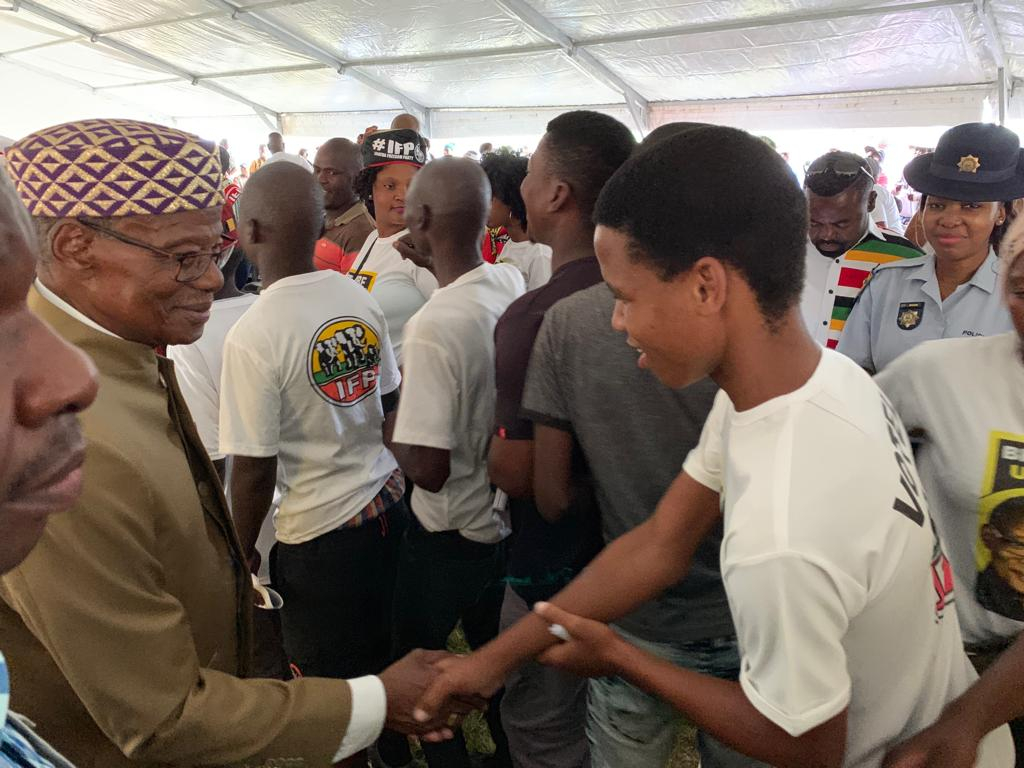 IFP Rally In KwaMashu And Launch Of The Sizonqoba Campaign

For many families in KwaZulu Natal and in the Eastern Cape, this has been a very difficult week. Torrential rain has flooded our streets, washing away roads and bridges, collapsing houses, and taking lives. I and the IFP’s leadership spent time this week visiting affected communities. The devastation we witnessed has wounded our hearts.

We took relief packages to several communities. But as much as people needed these material goods, they needed support as well. In the face of such tragedy, people needed to know that they were not alone. I am grateful to the many NGOs and ordinary South Africans who lent a helping hand.

It is going to take time to recover, both in terms of rebuilding infrastructure and restoring a sense of security. My deepest concern is that these things cannot be fully achieved, because for many there was no proper infrastructure and no real security to begin with. Most of those whose homes were destroyed were living in shacks or dilapidated RDP houses. When you live with poverty, there is never a sense of security.

I wonder about the long-term effect of hardship and despair. The trauma we see after sudden tragedy is being experienced every day, at a lower threshold, but continually. What does it do to families, to relationships, to individuals? Sadly we know only too well what sustained stress can do. We bear witness to its effects daily, in violence, suicides, road rage and hate speech.

There is a lot of anger and frustration in our country. But there is also a lot of courage. I say this because I have seen it with my own eyes. There are unemployed graduates giving their time for free to social initiatives. There are single mothers teaching their children the value of respect and honesty. There are terminally ill patients campaigning for cheaper medicines. There are families who have taken in orphans when they themselves are struggling.

There are endless examples in our communities of heroes and heroines whose courage goes unsung. They remind us that there is always something we can do to change circumstances and assist.

I want to speak to you today about the opportunity we all have to change circumstances in South Africa on a massive scale.

Ten days from today, on the 8th of May, elections will be held across South Africa. A public holiday has been declared so that as many voters as possible can get to their voting stations, and vote. We have a chance to change the leadership of our country, and in so doing to change our circumstances.

On the 8th of May, I will cast my vote at Mahlabathini Traditional Court. Where will you cast yours? It’s easy enough to find out where you’re registered. You can sms your ID number to the Electoral Commission on 32810, or you can go online and visit their website. The real question is not “Where will you vote?”, but “Who will you vote for?”

I have met countless South Africans in the past few months as I travelled the length and breadth of our country, and the message I hear time and again is possibility.

People who have always voted for the ruling party are ready to make a change. People who automatically supported the official opposition are suddenly on the fence. And people who gave their vote to the EFF, because they were new and loud, have had time to reconsider.

The President himself has lamented that South Africa experienced nine wasted years under his predecessor. That is almost a decade in which we went backwards in terms of development, growth and social cohesion. The result is a stagnant economy, staggering unemployment and a society that is deeply unjust. Have we emerged from that time of darkness, or are we still on the wrong path?

Sadly, we have not changed course, because the people steering our ship of State are still the same. We know that nothing has changed because the past year has brought us the Zondo Commission, the Bosasa scandal, the looting of VBS Bank, the PIC scandal, and the book about Mr Ace Magashule called “Gangster State”. Yet with all this evidence of corruption and theft, there are no arrests of senior leaders. Everything carries on as if nothing has happened.

Those nine wasted years were possible because the ruling party turned a blind eye to the corruption in its midst. Unless it starts dealing with the cancer of corruption, another year will be wasted.

But we have no evidence of imminent change. There is nothing to suggest that the ruling party will self-correct. It therefore falls to the people to do what is needed to save South Africa. We need to change the leadership at the helm of our country. No wonder there are so many parties contesting this election! It is clear as day that change is needed.

We cannot afford another five years of failure and corruption. But neither can we afford a political experiment. Too much damage has already been done. If we want to turn South Africa around immediately, and fix the damage, we need to run with a tried and tested leadership; with people we know can govern well. It is essential that we restore integrity to governance, through honest leaders whom we can trust.

Wherever you go in KwaMashu, you will see the IFP’s slogan, “Trust Us”. You see it on billboards and on T-shirts, on posters and pamphlets. This is a simple message, because the solution to the present crisis is simple. What does South Africa need? Justice. How do you create justice? Integrity. How do you secure integrity? With truth. We need leaders who are honest, with themselves and with you.

There is only one party campaigning on trust. Some would say it’s a risky move, considering the deep lack of trust that has divided the people from their elected representatives. But the IFP knows that trust is key to saving South Africa. Moreover, we know that trust has never been broken when it comes to the IFP.

For 44 years the IFP has been serving South Africa with integrity. Our track record is one of clean governance, honest leaders, real solutions and proven strength. We have what it takes to lead this country. We have the experience and the know-how. We have the character and the wisdom. And we have strong leaders who are already working on your behalf.

The IFP is a team of leaders. Over the years, hundreds of women and men have risen through the ranks of the IFP to serve in leadership positions. This is why I have no fear for the future of our Party. I know that when my time is done as Party President, this Party will continue from strength to strength.

I have the utmost confidence in our Premier candidate, Mayor Velenkosini Hlabisa. I have confidence in the candidates on our election lists, for I know them all, and I know that they will serve in Parliament and in the Legislatures with integrity and dedication.

These are people you can trust. These are the people working for you. They have chosen to serve through the IFP because the values of the IFP reflect their own values. We believe in unity in diversity, in solidarity, in social cohesion, in justice, in freedom, in the rule of law, in human dignity, in empowerment, in self-help and self-reliance, in patriotism and in fairness. We believe that every citizen deserves a chance at fulfilling their potential.

That is why the IFP offers more than just a way out of the crisis. We offer a way in to the country we all dream of; a country of social justice and economic justice, for all. Right now, our country needs solutions, and that is exactly what the IFP brings. Our manifesto for 2019 contains a list of solutions to the key challenges facing South Africa. We are giving you reasons to trust the IFP.

I want to encourage you to take an IFP manifesto. Read it. Think about it. Talk about it with your family and friends. If you have any questions, ask us. Connect with the IFP online. We want you to know exactly what we stand for and what we are doing for you.

It is important that you know what the IFP offers, because you need to make the right decision. The question of who you will vote for needs an answer. I am grateful to the stalwarts who have given their support to the IFP for all these years. I appreciate the men and women who vote IFP with every election, faithfully partnering with the party you trust. You have kept the IFP strong. You are part of our legacy.

On the 8th of May, the IFP is counting on your vote. But we believe that the IFP can exceed the support we have had in the past. The time is ripe for an IFP revival. There is every reason to hope for a resounding victory in the 2019 elections, because people are crying out for a leadership of integrity and only the IFP can answer that call.

Let me speak particularly to the youth. You may have heard of the IFP’s past from your parents and grandparents. They may have told you of the clean government we ran for 19 years in KwaZulu, before democracy was finally won. Never once was an allegation of corruption ever levelled at my administration. We brought that same integrity into democracy.

When the IFP was in the Government of National Unity, and throughout my time in Cabinet, we were known for honest leadership. Here in KwaZulu Natal, the IFP administered provincial government for 10 years. KwaZulu Natal has had three IFP Premiers, and they all have clean records. Likewise our MECs were people of integrity. Never once was there an allegation of corruption against our leaders.

That is the way it should be. But it’s almost unheard of in today’s South Africa. Under the ANC, it’s par for the course to hear allegations of corruption against MECs, premiers and senior leaders.

I want you to remember the IFP’s track record, because it tells you the kind of party we are. We stand for clean government, transparency, accountability and justice. With the IFP, the people always come first.

So when you go to your voting station on the 8th of May, look carefully at that ballot paper. There is only one party that has earned your support. Make your mark for the IFP. It’s the best thing you can do to change South Africa.

It is my great honour now to launch the Sizonqoba campaign of the IFP. This is the final stretch before the elections.

Tomorrow morning, the leadership of the IFP will board a branded bus to take our Sizonqoba campaign to every community and every home across KwaZulu Natal. Throughout the coming week, we will travel from place to place, speaking to our loyal supporters and touching base with every citizen.

We are spreading the IFP’s message of hope. This is going to be epic – Trust Us!