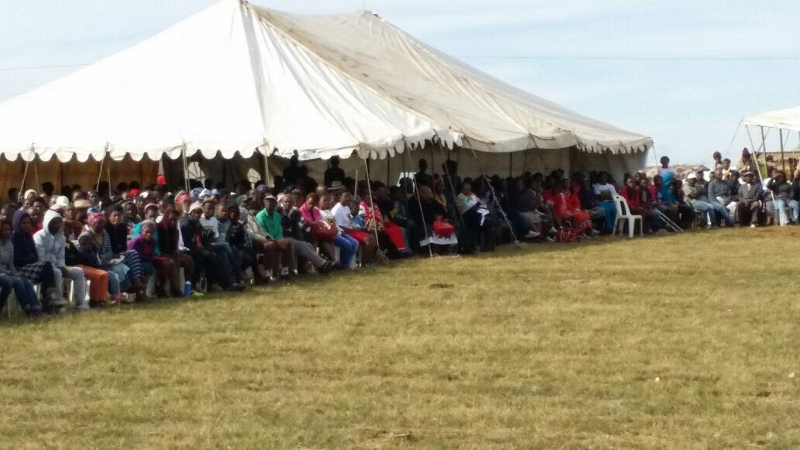 IFP Rally on the South Coast of KZN

It is good to be among friends as we celebrate Workers Day and share our hearts on issues that matter. The IFP is no stranger to Ugu, for we have served the communities of this district for 41 years. The IFP administered governance in the municipalities of Ugu for more than a decade after we achieved democracy. We laid a foundation of good governance and set in motion developmental projects that would have long-term benefits. I am proud of what we achieved.

Even now, as we serve in opposition, we are heavily invested in the success of every good project in Ugu. The legacy of the IFP continues to bear fruit, and a harvest is still reaped from the seeds we sowed when we stood at the helm. We are therefore vigilant over the work of those who followed us. When a different political leadership took over in Ugu, the IFP knew that we would hold them to account. We wanted them to be deserving of your mandate. We wanted to see them deliver.

Thus we have continually demanded that councillors respect your mandate. The ethic behind the ANC is different to the IFP. While the IFP believes in governance from the ground up, through empowered communities, the ANC believes in governance from the top down. The IFP engages communities to design their own policies in partnership with the municipality; the ANC only calls public meetings to tell people what has already been decided. It’s a different approach, and we want to be sure that your voice isn’t compromised under that kind of leadership.

It has, unfortunately, been an uphill battle, for we have constantly had to remind your public representatives that they are here to serve your interests. We have called them to task, asked them to account, and demanded more efficient local governance. We have questioned wasteful expenditure and spoken out against nepotism and cadre deployment. We have called for an end to tender fraud and highlighted how corruption destroys governance.

The question that must now be answered is whether they deserve another chance.

In just three months’ time, South Africa will hold a Local Government Election. Voters will speak through the ballot box and decide the future of municipal governance. On that day the power will not be in the hands of politicians and officials. It will be where it belongs: in your hands. You will speak. Your voice will be heard. The power to bring the change South Africa needs will be in your hands.

I often find that people think Local Government Elections are less important than national elections. But this is far from the truth. Local Government Elections decide how things will be done at the very level that affects you most. This is the election in which you vote on bread and butter issues. This election is about water supply, houses, sanitation, roads, electricity, local development, small business interests, community safety and youth projects. It’s about food security, about keeping your children safe on the streets, about getting support for your community initiative, and getting your SASSA grant easily and securely.

This election is about you. It’s about who you can trust to run your municipality in the way it should be run.

Wherever I go, throughout our country, I hear people asking the same question, “Who can I trust?” Trust is at an all-time low in South Africa. According to a survey released by the Institute for Justice and Reconciliation, a full half of self-proclaimed ANC supporters distrust the President of the ANC. We are living in a situation in which the President has failed us, ministers have failed us, premiers have failed us and councillors have failed us. Where is accountability?

There is an underlying belief in the ANC that the rules don’t apply to the ruling party. When the leader at the top disregards the Constitution, we shouldn’t be surprised that leaders at local level disregard municipal regulations. The example comes from the top. It’s a corporate culture that says, “When you have power, you can disregard the rule of law.”

We are inundated with negative statistics and bad news stories. Life is hard, and it’s getting harder. But let us not lose sight of why we love our country. South Africa is a jewel worth fighting for. We rank first in the world in Platinum output. We rank second for Palladium, sixth for Gold, sixth for Coal and ninth for wool. This is a rich country. But still we see poverty living alongside wealth. We see inequality and desperate families, struggling to survive.

It matters who we put in charge of all this. The leaders who get to administer the wealth of our country should at very least be people we can trust. This applies at a national level as much as it does at provincial and local level. Many people are frustrated in South Africa. Civil society is rising in protest against failed political leadership. People want to DO something about Nkandla, about the Constitutional Court judgment, about the white-washed arms deal and the allegations of corruption at the highest level.

Right now, it is up to the ANC’s rank and file to deal with their own President. But ordinary citizens are not helpless. You may not be able to change what happens at the top, but you can change what happens in your municipality. You CAN send a message from the lowest levels of government right to the top. It starts in your community, at your voting station, on the 3rd of August. It starts with where you place your cross.

So as you weigh up your options and consider who deserves your valuable vote, I want you to know that there IS a party you can trust. Trust the IFP. I am not asking you to do this on the basis of any future promises. The IFP believes in earning your trust, not demanding it upfront. What I am saying is look at our character, look at our legacy, look at what we have done in the past. This is a party you can put your trust in.

We governed KwaZulu for 19 years, and never once was a single allegation of corruption ever levelled against my administration. When we administered municipalities across KwaZulu Natal we did so with transparency, efficiency and constant community participation.

The IFP does things differently. We do them better. We have solutions and experience. We’re honest. We talk straight. We know how to get the job done, and we respect the people we serve. There is good reason for you to put your support behind the IFP for local government.

Right now, the best thing you can do is get involved in bringing change to Ugu. Talk to IFP leaders in your community. Talk about the way things used to be, and the way they could be. Talk about what needs to change, and how we can make that change through the ballot box. Your vote is your voice. If you don’t use it, and use it wisely, someone else will decide your future.

I hope to see every member of this community at voting stations on the 3rd of August. If you haven’t registered, there is still a brief window to do that. Until the election date is proclaimed in the Government Gazette, you are still able to register. So do it now.

Even if you are registered, I encourage you to check that you are on the voters’ roll, that your residential address is correctly captured, and that you know where you are registered to vote. I have heard from many people that when they checked, their addresses were incorrect, or they were told that their voting station had changed even though they had not moved since the last election.

Let us not assume that everything will run smoothly. Let’s check now to ensure that on the day there is nothing that prevents us from casting our votes. And then, on election day, let us vote for the party we can trust. Let us vote IFP.

This is our democratic right. It was hard won, and now we must use it.