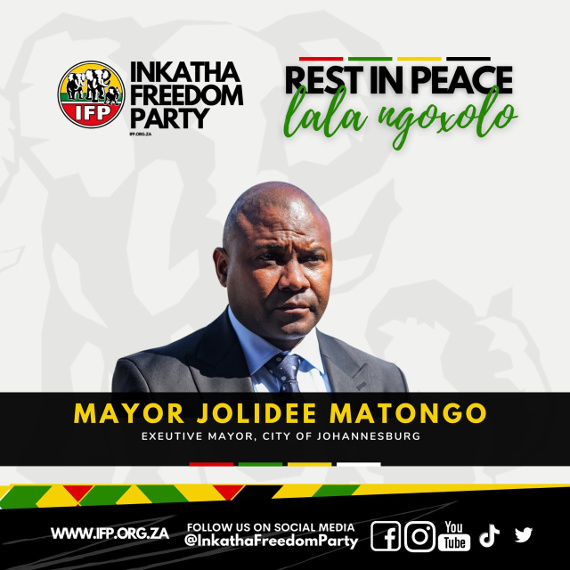 The Inkatha Freedom Party (IFP) in Gauteng is devastated to learn of the tragic passing of the Executive Mayor of the City of Johannesburg (CoJ), Mr Jolidee Matongo.

The IFP extends its deepest condolences to Mayor Matongo’s family, friends, colleagues, and all his comrades in the ANC, during this difficult period.

Mayor Matongo was elected on 10 August 2021 to lead the Government of Local Unity, alongside the IFP, and other parties in the City of Johannesburg (CoJ). Prior to that, he served as a Member of the Mayoral Committee (MMC) for Finance in the CoJ, under the leadership of the late Mayor Geoff Makhubo.

Mayor Matongo had an illustrious career in public service. Before his appointment as MMC for Finance, he previously served as Chief of Staff in Gauteng’s Department of Economic Development and worked as Deputy Director of Youth Development in CoJ.

Mayor Matongo served with a fervent spirit and the utmost dedication to the citizens of Johannesburg.

His loss is felt not only by members of his family and his political organisation, but the rest of the citizens of Gauteng.

May his soul rest in perfect peace and his contribution to society outlive him. Lala ngoxolo qhawe!