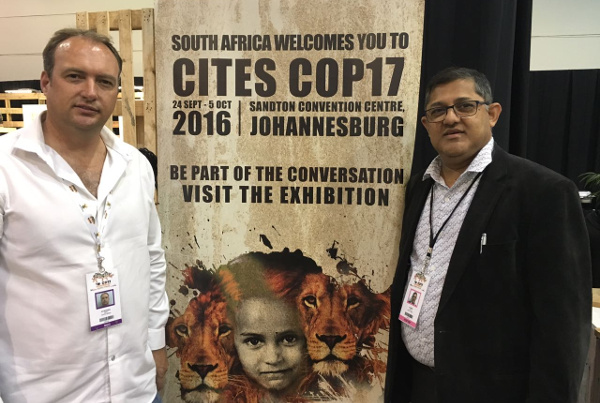 The Inkatha Freedom Party represented at CITES COP17 (Conference on Trade in Endangered Species) by the party’s Chief Whip in Parliament, Mr Narend Singh, MP, and party law adviser, Adv. Anthony Mitchell, have come out strongly in support of the CITES adoption of proposal which seeks to transfer African lion (Panthera leo) from CITES Appendix II to Appendix I.

‘’The Inkatha Freedom Party have been vociferous supporters of the African lion of which there are currently as few as 20000 left in our African wilds. We have raised the plight of our lion on numerous occasions in parliament through motions, member’s statements, parliamentary debates and press releases and will continue doing so until the primary threats to the survival of this iconic species are properly militated against. Threats such as indiscriminate killing, poorly regulated trophy hunting and most importantly, the growing international demand for lion bone products seek to all but decimate the species. These threats must be neutralized for the survival of the species and it is to this end that the IFP supports the proposal currently before CITES to transfer Panthera leo to Appendix I.”

“Just recently our leader, Prince Mangosuthu Buthelezi, MP, received and facilitated the delivery of over 500 000 hard copy petitions from International NGO, Four Paws, signed by people the world over calling for an end to the barbaric practice of canned or captive-bred lion hunting in South Africa. Whilst the Ministry of Environment contend that the practice is currently illegal in South Africa, we have credible information that there are many hunting operations in farms throughout South Africa, where this abhorrent practice is still being perpetrated. We hereby accordingly place such illegal hunting outfits on notice; we know who you are and we will be working together with the Ministry of Environment to ensure that your operations are shut-down and that you are are prosecuted to the fullest extent of the law.”

“Conservation and protection of our wildlife is an obligation that we as human beings owe to all living creatures. We have a solemn responsibility of being caretakers of all that we have been given dominion over for the short time of our sojourn on this planet. Why do we continue to choose destruction and indiscriminate killing over conservation and responsible and sustainable use?” concluded Singh, MP.

The Inkatha Freedom Party will continue the fight on behalf of all South African wildlife.