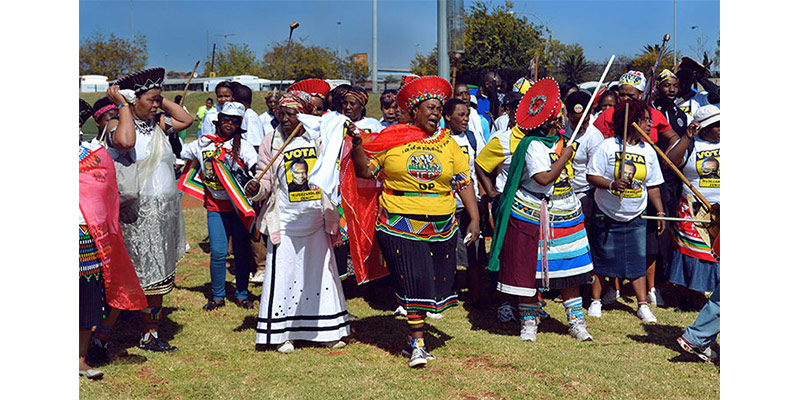 “Why is the ANC Women’s League in KwaZulu Natal so obsessed with Prince Mangosuthu Buthelezi? Have they never been confronted with a man who is genuinely respectful of women’s dignity and rights? Why must they manufacture reasons to question his unquestionable character?”

This was the response of the IFP Women’s Brigade to a scathing attack launched by the ANC Women’s League in KwaZulu Natal yesterday, based on an inaccurate article published in Isolezwe. Bizarrely, the article claimed that the President of the IFP had called on the IEC to ‘manhandle’ women voters.

“We were there,” said Mrs Thembeni kaMadlopha-Mthethwa, National Chairperson of the IFP Women’s Brigade, “We were at the stadium when he spoke. He never said anything about manhandling women, or discriminating against women in any way. This is utter rubbish. We challenge the ANC Women’s League in KZN to watch the footage of our final rally and point out exactly where the President made these alleged statements.”

“They may not want to watch him speak though,” she added, “Because his powerful message of truth may very well sway their opinion away from the propaganda and lies they have fed on for so long. If they actually listen to Prince Buthelezi speak, these women are likely to vote IFP.”

The jaundice so often displayed by the ANCWL in KwaZulu Natal against the IFP’s President is evidence of their deep hatred for a man that is impossible to fault. Rather than verifying the facts, they launched an attack, hoping to do maximum damage before the truth prevailed.

“Their obsession has reared its ugly head before,” said Mrs kaMadlopha-Mthethwa, “When the NFP leader was still pretending to be a loyal IFP cadre, the Women’s League in KZN sang songs in the Legislature insulting Prince Buthelezi and claiming he was scared of a woman. They denigrated him endlessly, with no evidence, even after her treachery was exposed.”

The IFP Women’s Brigade is disgusted by the disingenuous plea to ‘call him to order’. “We support a man who respects women,” said Mrs kaMadlopha-Mthethwa, “But the ANCWL prefers to attack a man who respects women. How does that further women’s rights? The ANCWL should focus on actual statements made by their own leaders: like when their President said that victims of sexual harassment are too sensitive, or when the League’s own Chairperson said she wanted to hit protesting women, or when the Department of Women suggested on social media that victims of domestic violence should be punished if they withdraw charges.”

Why is the ANCWL in KwaZulu Natal silent when the ANC blunders so profoundly on its so-called record of respecting women?

This obsession with the IFP is ridiculous.