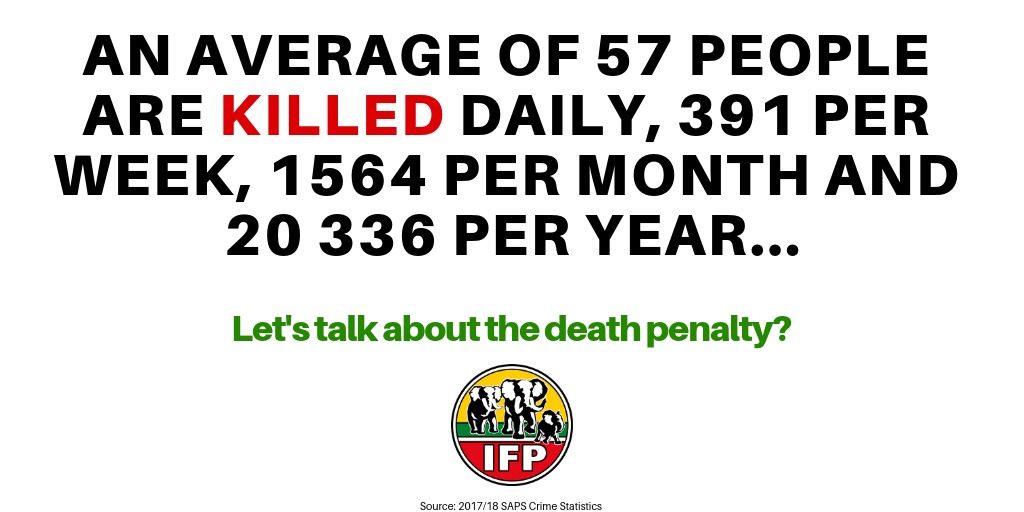 Note to Editors: This statement follows the release of the 2017/18 Crime Stats by the South African Police Service (SAPS) in Parliament today.

The deplorable state of crime in our country, particularly in regards to the murder rate is reason enough to get South Africans talking about the reinstatement of the capital punishment.

It is immensely distressing when National Police Minister General Bheki Cele, tells Parliament that the “murder rate borders on war zone” in our country.

The chilling statistics and the increasing rate of violent crimes in our country begs the question if our current tactical, strategic and prevention systems are enough to deter criminals from committing these heinous crimes.

The IFP believes that a national dialogue must be had around prevention.

We are well aware that the SAPS officers’ numbers have been in decline, yet we are certain that we can combat crime if all sectors of society and in particular community based organisations work together with the SAPS to assist in combatting crime.

It is shocking that year on year we are faced with a number of increases in regards to kidnapping, farm murders and cash-in-transit heists.

The IFP reiterates its call on the Joint Constitutional Review Committee to table our request for a debate on the reinstatement of capital punishment.

Our people desperately seek solutions and are looking to us as democratically elected representatives to provide solutions to our country’s crime woes.