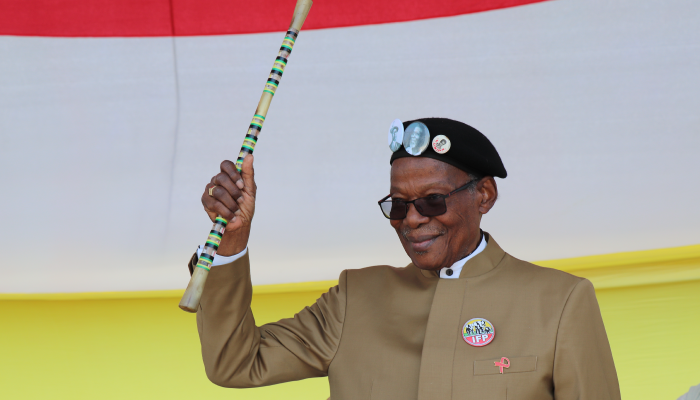 It is an honour to stand before you today to deliver a lecture on the illustrious legacy of the founding father of the IFP and Honourable President Emeritus, Prince M.G. Buthelezi, MP.

I particularly wish to commend the organisers for coming up with the theme “IFPYB’s Grapevine” and also note that it is befitting that this lecture is featured in the programme, as it affords us the opportunity take stock of what we mean when talking about the legacy of our leader. It is commendable because for those us who know Shenge, also know of his passion for education and political education. As scholar himself, he is a wellspring of knowledge for those thirsty for knowledge about the IFP and our country’s history.

Now before I start, I must admit, that the time I have been allocated here is simply insufficient to do justice in defining all the achievements and accolades which constitute the legacy of our leader. Nevertheless, I will attempt to do my best, and focus on the core principles and the leadership character of the President Emeritus and use that to elaborate on the lessons of his legacy.

A key feature of those principles is servant leadership. Shenge remains steadfast on the principle that being a leader is not about self-aggrandisement but the willingness and ability to serve the people.

As a young man in his early twenties, fresh from university, he sacrificed his prospective career as a lawyer to become the leader of the Buthelezi clan in 1953. This was one of the many sacrifices he would make in his life, at the behest of his people. He personifies the kind of selfless leadership which puts the needs of the people first above all else. Today he has more than half a century’s experience in as a traditional leader and politician, and it is admirable that he continues to be a humble and principled servant of our people. Leading with integrity. That is his legacy.

It is his will and commitment to serve, that I wish we could all learn from and strive to emulate today. Especially those of us entrusted with leadership positions in the party, we must move from understanding that we lead by example. In this regard, I can say that as the IFP we are most fortunate because we still have a living example of what that leadership entails. We must look no further than the example set by the Honourable President Emeritus Prince Buthelezi, MP. That is the meaning of his legacy – it means we have a constant reference point on leadership.

Dr King was criticised by many within the Civil Rights Movement, including fellow black American leaders such as Malcolm X, who favoured the idea of a violent revolution. In South Africa, the Honourable Buthelezi received similar criticism from his contemporaries, who were in the ANC and PAC, for not backing their calls for violence during the height of apartheid. Instead, the IFP President remained resolute then, as is he is today, that reason should prevail and that peaceful resistance, non-violence and negotiation would eventually bring an end to apartheid.

Even when he was being vilified, and had suffered the loss of thousand IFP members to political violence at the time, the IFP President continued with the peaceful campaign for the release of apartheid political prisoners and an end to apartheid through negotiations. This was a display of his tolerance and humanism (ubuntu) in the struggle. It is a lesson for us to remember when talking about the meaning of his legacy.

His legacy of wise brinkmanship, being able to speak truth to power, as well as, being an advocate of non-violence, earned the Honourable Buthelezi many international accolades of respect and recognition. One of them is the Honorary Doctorate of Law conferred to him by Dr Martin Luther King’s alma mater, the University of Boston Massachusetts in 1986. The university also gifted him with one of Dr King’s journals – as a sign of recognition of their like-mindedness.

The late Professor Herbert Vilakazi, once wrote that in the aftermath of the Sharpeville massacre, which saw banning of the ANC and PAC, “the only critical voices in the African community left were those of Black students and that of then KwaZulu’s Chief Minister, Prince Mangosuthu Buthelezi.” Indeed, Shenge remained the lonely voice of reason and pragmatism during the dark days of apartheid, pushing non-violence even when it appeared unfashionable.

He remained principled and committed in the good fight. He was eventually vindicated, as the apartheid state eventually agreed to free political prisoners a negotiated settlement was reached to end the apartheid. Throughout that time, the leadership of Honourable Buthelezi was pivotal to securing our country’s constitutional democracy as we know it today. So much was his commitment to seeing the democratic project through, that he diligently worked side by side with his opponents as a cabinet member in President Nelson Mandela and Thabo Mbeki’s administrations. We also know that in that time, he was given reigns as Acting Head of State on no less than 20 occasions, with no scandals or incidents of corruption reported. He simply did the job as competently as he does always. Never betraying people’s trust.

Today some propagandists wilfully chose to forget and want to erase this history. But it is a true and undeniable part of our legacy as the IFP and as the citizens of this country, which Shenge has long served. We remember it, for it is part of our legacy, the legacy of Shenge’s cool-headed and pragmatic stewardship. Less can be said by other political parties today, who can barely say they lead with integrity.

Shenge’s leadership legacy remains even more critical today, as Leader of Caucus in our national assembly, he continues speaking the truth and protecting our democracy from ruin by corrupt elements within the ruling party. His is a legacy of activist leadership. Not only marshalling slogans but willing and able to get the job done.

In conclusion, during the occasion of the official opening of The Prince Mangosuthu Buthelezi Museum and Documentation Centre, at Ulundi on 28 August 2015, the Honourable Prince Buthelezi said the following and I quote: “I have been blessed by the words of admiration and respect. Simply knowing that it is goodwill towards my life’s work that has brought you here, nudges me towards humility. I will not stand and boast on what destiny called me to do, or boast about the sacrifices I have made, or about the principles I have stood by.”

With these words, comrades, I wish to remind us that of the principles of servant leadership and integrity, which our President Emeritus has always stood by. They also define his legacy. I hope that we all honour his legacy by continuously learning and doing things, the way he has done. Keeping true to the spirit of ubuntu. I thank you.