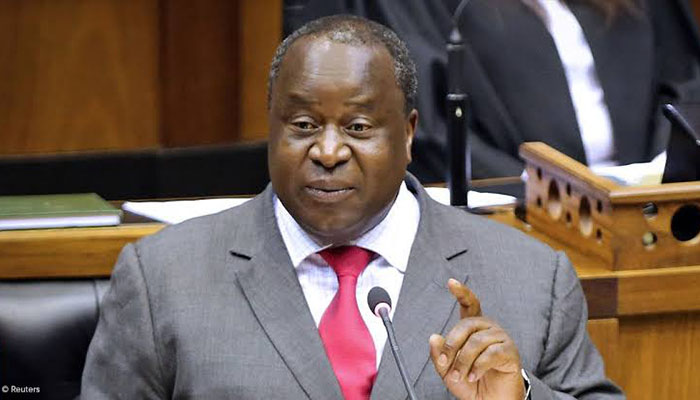 MINISTER MBOWENI, IN A TIME OF CRISIS WE MUST ACT WITH URGENCY

The state of our nation and of our economy is in crisis. South Africans find themselves in a position they did not ask for, but as we tackle the biggest crisis since the dawn of our democracy, there is no more time to shift the blame and no more time to pass the buck and make excuses.

We are on a fiscal cliff and the future of our country depends on the statement which will be delivered by Finance Minister Tito Mboweni tomorrow.

This comes at a time of heightened anxiety about the state of our economy, water and food security, and the inability to fight crime and corruption in our country.

Our people do not feel safe, and they do not have the means to do anything about it.

Minister Mboweni will be delivering the medium term budget policy statement against the backdrop of Statistics South Africa’s Quarterly Labour Force Survey for the quarter ended September 2019 as it sadly welcomed millions more to the unemployment line.

A staggering 3.3 million young South Africans aged 15–24 years were recorded in this quarter to not be in employment, education or training.

The IFP firmly believes that at the crux of the many crises we face is the grave deficit in moral and ethical leadership. Government has failed to address rooting out corruption. Agency after agency gets established but we can no longer afford to put a plaster on the gaping wounds of rot.

We implore the finance Minister and his cabinet colleagues to adopt with urgency the proposed plan by National Treasury on “Economic transformation, inclusive growth, and competitiveness” in order to swiftly get our country out of ICU.

The recommendations made in unbundling Eskom are welcomed, however, if at the helm of the ailing parastatal principles of morality and ethics are not enshrined we will simply be unbundling more of the same.

We believe that all National Departments should get back to focussing solely on the essential services to assist South Africans in leading a better quality of life.

In a time of crisis we need to act with urgency as for far too long have South Africans witnessed the sluggish delivery of services by government and public servants.

Minister Mboweni would do well to follow up on the commitments made by the previous Minister of Public Service and Administration to reduce the public sector wage bill and to take bold steps in assessing redundancy within Ministerial offices.

The only cuts South Africans should be hearing of is that of National and Provincial bloated executives and fancy “nice-to-haves” the elites get to enjoy while millions get to experience the cuts of water, electricity and that of their jobs.

Hard choices will need to be made so that we can lure back investment into our country and that we inspire confidence and reinstall hope that we can return to economic prosperity as a nation.

The budget will have to provide certainty by assuring the employed of job security, the unemployed of job opportunities and investors of a conducive environment in which to conduct business.

We can only hope that Minister Mboweni will heed our calls and table a budget that addresses the immediate, short to medium term and longer term challenges facing our nation.