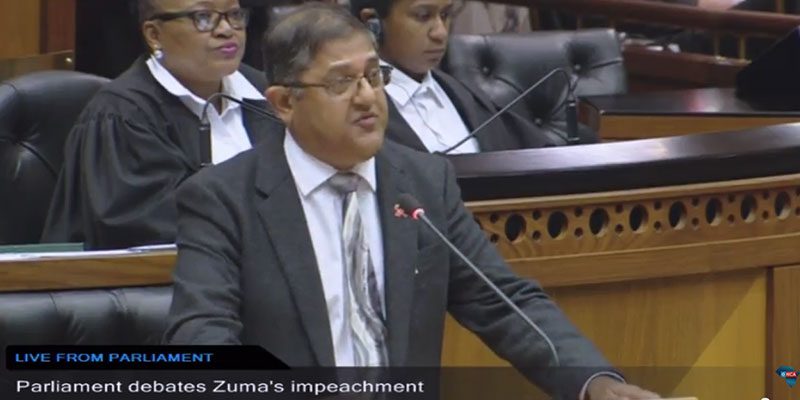 Motion To Remove The President From Office

Following the President’s statement to the nation on Friday night, the Secretary General of the ANC, Mr Gwede Mantashe, faced the obvious question from the media. Could this lead to the removal of the President in terms of section 89(1) of the Constitution? The short shrift with which Mr Mantashe responded should have been a warning to us all that there is no hope of a two-thirds resolution. This is just not going to happen.

When we stood in this House last month and debated a motion of no confidence, the President of the IFP reminded us that the ruling party has repeatedly used its majority to shut down opposition, whether it is in the best interests of the country or not. There is no reason to believe that today will be any different.

The whole saga of Nkandla was precipitated on this bull-headed use of parliamentary majority. At the very first meeting of the ad hoc Committee on Nkandla in 2014, I advised that a declaratory order be sought from the Constitutional Court on the binding nature of the Public Protector’s remedial actions. The ANC refused, launching a two year debacle that has ended where it should have started: in the Constitutional Court.

The IFP was deeply disappointed in the President’s response to the Constitutional Court judgement. The very least South Africa deserved was an unreserved apology, for the abuse of taxpayers’ money, for the refusal to admit that he and his family had unduly benefitted, for treating Parliament with scorn when questions were asked, and for standing by, while the reputation of Parliament, Government and his own Party sustained irreparable damage.

Simply apologising for “frustration and confusion” is a slap in the face of every South African.

Speaker, we participate today in support of the motion on the order paper, knowing full well that the majority will still use their power to flout the constitution.

This is not South Africa against the ANC. This is about respecting the supremacy of the constitution and the rule of law. This is about saying to 11 constitutional court judges “Thank you for applying your minds and leading the nation”. We as a National Assembly now have a responsibility to act, otherwise history will judge us harshly.

To the ANC we say “we know you are being torn apart, not only by the calls of the opposition, but from within your own ranks.”

Saying “NO” to this motion, would not only be morally and ethically unconscionable but would also be a clear violation of the sacrosanct oath of office that each and every one of us hold here as members of parliament.

We implore you as the ruling party to do the right thing, and if you choose not to, then one can only say CRY THE BELOVED COUNTRY!