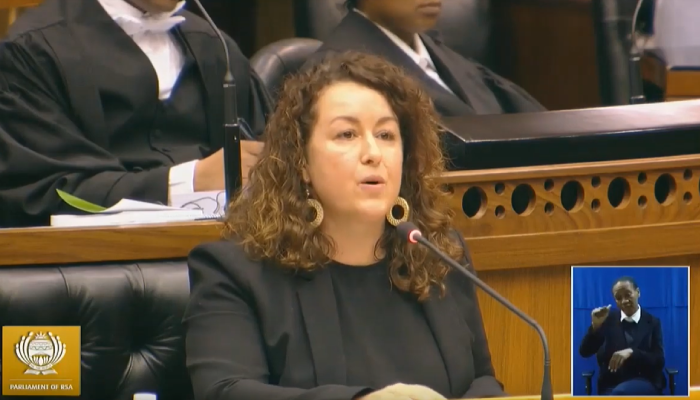 Gender and institutionalism –
Towards strengthening the national gender machinery

Each year, we rise to this podium to say the same things. We quote the same statistics. We lament the same challenges. We speak about this lawless country of ours like there is some type of normality to it.

We remember them. And we pledge that things must change. But the reality is: nothing has changed since we last stood at this podium a year ago to debate Women’s Day.

Nothing has changed because what is missing from these debates, year after year, is action, outrage, urgency, political will, resources and change.

We know, that the system is failing our women; we know that NGOs and shelters go underfunded and that police stations still don’t have rape kits. We know the scale of the crisis. We know. Yet, nothing has changed in the past year.

Hon Speaker –
We face a national crisis. To make matters worse, as Johannesburg burns, as Pretoria, and our trucking industry burns, and more women die, we’ve heard nothing from our President.

It is against this background, that I had great difficulty in preparing for today’s debate.

Like most South Africans, I feel angry because we live in a lawlessness country, where criminals are in charge and where our lives mean nothing. I feel despair because instead of offering us solutions and hope, our Government offers us condolences instead.

And I have to ask: how many more South Africans have to die, before our Government finally listens and acts?

In the midst of my despair, I was moved by the example of a government that cared. One that listened.

Sierra Leone’s President recently declared rape and sexual violence a national emergency in his country. He responded to a national outcry.

I believe it is time for us to follow that example, and do the same. It is time to accept that we too face a national emergency. Until we declare the lawlessness that has besieged South Africa a national crisis, and treat it as such, justice will not prevail.

But that should only be the start.

As we said during the elections, the IFP believes that a debate around the death penalty should be re-opened. We need a costed, concrete plan to fight gender-based violence, now. We need to support NGOs and fund shelters. We need a better trained, better paid and more effective police force.

I recognise that Government cannot do this on their own. Each of us has a role to play. At our recent elective conference, the IFP committed to launch a massive campaign in defence of the most vulnerable. We have tasked our councilors, mayors, MPs and MPLs to play their part.

We did this because we know that the face of poverty, exclusion, struggle and despair is still female.

Like every woman, I must ask our Government today: am I next? Or will it be one of you?