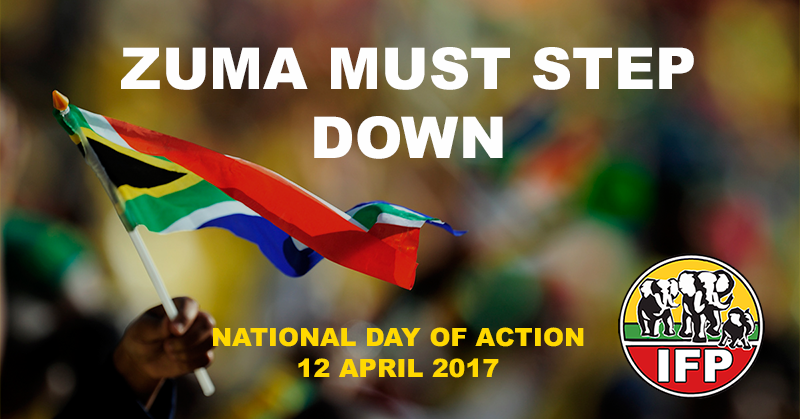 National Day Of Action – March To The Union Buildings

I speak on behalf of the Inkatha Freedom Party, with the mandate of millions of South Africans. We stand in support of the National Day of Action, because we stand for the future of our country. We are not willing to watch while our nation is led into darkness. We cannot stand by as our dreams torched.

The IFP knows that the stakes are too high for anyone to be passive. Ignorance is not bliss. Indeed, ignorance will destroy South Africa. I therefore call on us all, but especially on the youth, to search out the truth about what is happening. Don’t be misled by those who tell you that junk status is a blessing in disguise, or that it doesn’t matter, or that it’s a trick by foreign powers.

There are very real repercussions for the economic downgrade that South Africa has suffered because of the President. When the cost of bread goes up in the coming months, remember who is responsible. When our families can’t make ends meet and the Rand keeps losing value, let us not forget who did this to our country. The President is responsible for acts of commission and omission which have brought us to these dire straits.

We cannot afford to simply sigh and hope that things get better. It’s time to take action and remove the cancer from the heart of our country’s leadership. That cancer is the cancer of corruption, and it starts at the head.

Unless we stop him, he will continue to destroy the greatest hopes of our nation. Already he has damaged the legacy of Africa’s oldest liberation movement. Now he has damaged the economy, and the price will be paid by every one of us. This legacy cannot be obliterated unless the President allows one of his colleagues to take the helm.

There is no quick fix for what the President has done. It will take time for South Africa to recover. Indeed the youth of South Africa have already been saddled with an unthinkable debt, which will need to be paid in the years to come. Your future has been set back by decades.

So there is no quick fix. But there is something we can do to stop the rot from deepening. We must remove the President. If he leaves, we can begin to recover. But if he stays, we will sink ever deeper into crisis.