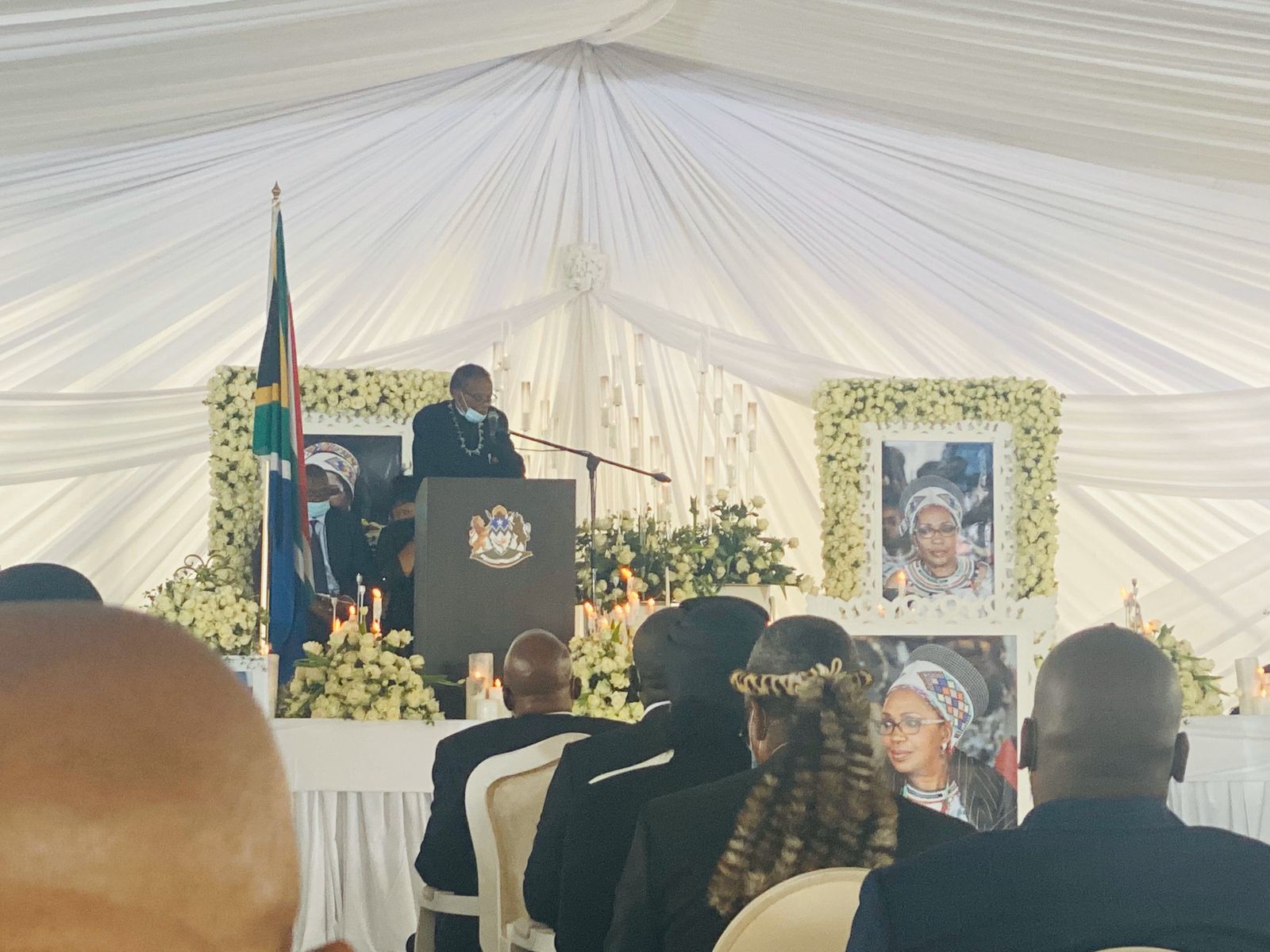 I encourage us this morning with the Psalm of King David, “The Lord is close to the broken hearted and saves those who are crushed in spirit.” Let us cling to these words, for our hearts are indeed broken.

Forty-eight years ago, my nephew King Goodwill Zwelithini kaBhekuzulu, came to see me and announced that His Majesty King Sobhuza II had offered his daughter’s hand in marriage. The beautiful young Princess Shiyiwe Mantfombi would become the Great Wife of our King. I was delighted, for I had the greatest respect for the monarch of eSwatini. I and my mother, Princess Magogo kaDinuzulu, had been received by King Sobhuza II some ten years before. I knew that the strong relations between our Kingdoms would be strengthened even further by this marriage.

My heart therefore swelled on Wednesday when I saw the royal delegation of eSwatini bringing the remains of Her Majesty home from Johannesburg. I thank His Royal Highness Prince Guduza, who was my counterpart as Minister of Home Affairs, as well as Induna Ginidza, and the princes and princesses of eSwatini.

On behalf of the Zulu nation and on behalf of the Zulu Royal Family, we thank you for seeing our Regent home to KwaKhangelamankengane. We express our deepest condolences to His Majesty King Mswati III and the Swazi Nation. Your pain is our pain, for we have lost a magnificent princess.

Queen Mantfombi was a woman of tremendous dignity and grace. Simply from the way she carried herself one could see that she was born to royalty. Yet her defining feature was humility. She had a deep concern for her people, particularly for the women of the Zulu Nation. She stretched out her hands and helped them to rise.

Many will honour her as a mentor and as someone who lifted them up. She was truly a combination of beauty and brains. I am not shy to say that I looked forward to her regency, for she would have surprised many with the depth of her mind and the extent to which she was dedicated to her people.

It was that dedication that led her to accept the greatest burden. When His Majesty our King appointed Queen Mantfombi, through his will, to become our Regent, she accepted an extraordinary responsibility. Her willingness to accept shows the strength of her character. As always, she put the Zulu Nation first.

It is devastating that we lost her so suddenly, in the prime of her life. More devastating still when not two months ago we were gathered at KwaKhethomthandayo having laid to rest her husband, our King.

One cannot imagine the pain of their children. Our deepest condolences are reserved for them. Our sympathy and support, and our prayers, are with them. So too are our prayers with the Zulu Royal Family who has lost so much in such a short space of time. The same can be said about the Swati Royal Family.

May the Lord strengthen us to bear such grief.

We thank His Excellency the President and the Premier of KwaZulu-Natal for the support they have given us in honouring our Queen. In so doing, they have honoured our nation.

His Majesty King Letsie III of the Kingdom of Lesotho has asked me to convey his condolences to the Royal Families of both the Zulu and Swazi Nations. His Grace the Most Reverend Dr Thabo Cecil Makgoba, Archbishop of Cape Town, has also asked me to bring you his message.

His Grace Dr Lekganyane, Bishop of the Zion Christian Church, and many leaders of different denominations have conveyed their messages of sympathy. We appreciate their prayers and support.