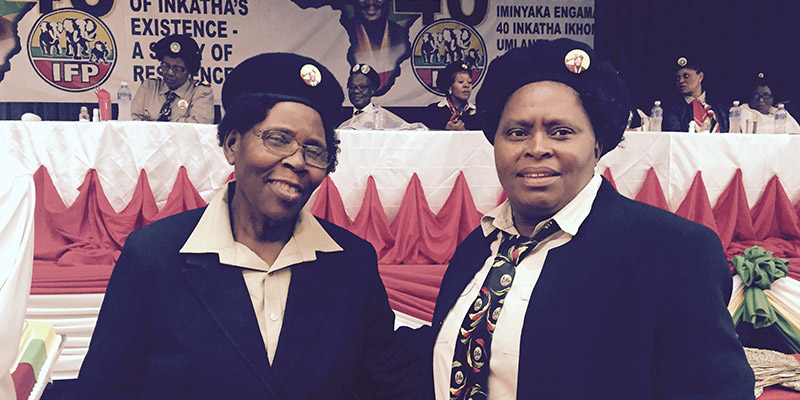 On The 40th Anniversary Of The Inkatha Freedom Party, A Celebration Of The Stalwarts And Veterans Of The IFP Women’s Brigade

Women of the IFP, I salute you. Here in this hall are the champions of our nation. Here are the daughters of Africa. Here are the birth mothers of democracy. And here, in this very hall, are the leaders of tomorrow’s South Africa.

I come to this celebration with a sense of profound gratitude. I know what is owed to the women of the IFP. I know the struggle you have waged on behalf of our country, on behalf of your communities, and your families. I have seen your work in the IFP, over four decades, and time and again I have seen the evidence of your strength, resilience, and deep patriotism.

The women of Inkatha were the forerunners of this generation of IFP women. When South Africa achieved democracy, they passed the baton. But, thanks God, many of those stalwarts continued to walk with us. Their journey in our National Cultural Liberation Movement continued as they served in a fully-fledged political party. They mentored the younger women of the IFP, and taught them the same lessons of self-help and self-reliance; for these lessons are timeless.

This year, as the IFP celebrates the 40th anniversary of its service to the nation, the centre stage must be given to those who have been the hands and feet of this Party. We therefore felt it important that this year’s celebrations focus, during Women’s Month, on the great contribution of the IFP Women’s Brigade in making our Party what it is and what it has been for the past 40 years.

At times like this, when we look back on the trials and victories that have brought us to the present moment, we cannot help but remember that historic day on which Inkatha yeNkululeko yeSizwe was formed. We remember how, on the 21st of March 1975, a group of patriot men and women gathered at KwaNzimela in KwaZulu.

Our meeting there was the culmination of a long history of struggle waged on South African soil; a struggle for freedom. We had, at that point, been through 150 years of white domination, and had been subjected to 65 years of oppression.

Yet in the midst of this, political mobilisation for freedom was experiencing a hiatus. Following the banning of the ANC, PAC, and other political parties, cohesive activity dwindled. A blow had been struck to the liberation struggle. But it could by no means silence the righteous demand of South Africa’s oppressed, for freedom. What was needed was a political home within South Africa which could bring our people together again as a cohesive force.

When I returned from that visit, I immediately sought the advice of Mr Oliver Tambo, the leader of the ANC’s mission-in-exile, with whom I had worked for years. He agreed. I also sought the wisdom of my mentor, Bishop Alphaeus Zulu, who advised me to focus on the cultural aspect of the organisation to avoid an outright banning by the apartheid regime. It was Bishop Zulu who suggested the name Inkatha yeNkululeko yeSizwe, the National Cultural Liberation Organisation.

Thus Inkatha was born. And from the very moment of its inception, it was understood that women would play a central role in the work of Inkatha. I wish to honour the women leaders who were present at KwaNzimela on the 21st of March 1975. Today, we honour these women, and the many stalwarts and veterans of the IFP Women’s Brigade, both past and present.

As we look into the past, we are acutely aware of the present moment, which sees the women of our Party pitted against relentless challenges and facing the daunting task of steering South Africa away from destruction. The work being done by our women today – by you yourselves – is equally valuable to the work accomplished by

the women of 1975. Your role in shaping South Africa will be remembered with gratitude forty years from now.

I believe that forty years from now the IFP will still be standing. It is beyond question that the future South Africa will need the values and integrity of the IFP, just as the present South Africa needs what only the IFP can provide. But my belief in the enduring existence of the IFP is based not on the needs of our country, but on the capacity of our core supporters – our women – to meet those needs. I am speaking from a wealth of experience, for I have witnessed first-hand what our women can accomplish even under the direst of circumstances.

Let us encourage ourselves in the present battle by remembering victories already won.

Many of you were with Inkatha while KwaZulu struggled under the oppressive punishment of the apartheid regime. We were punished because we refused to toe the line on the policy that saw black South Africans lose their citizenship. As the Chief Minister of the KwaZulu Government, I rejected nominal independence for KwaZulu, derailing the entire grand scheme of apartheid to balkanise our country.

It was a serious blow to apartheid. Indeed, when he appeared before the Truth and Reconciliation Commission years later, former President de Klerk alluded to it having been the death blow to apartheid, for the Nationalist Government was forced to abandon their vision. At the time, KwaZulu bore the brunt of Pretoria’s fury over our resistance.

KwaZulu was allocated a pittance from the national budget with which we were supposed to meet the vast ocean of need among our people. The blatant intention was for us to fail. And, on the face of it, failure was inevitable. But what they hadn’t taken into account was the fighting spirit of Inkatha that began to teach self-help and self-reliance in the midst of hardship.

At the heart of all we did, was a core of women pushing back the economic and mental boundaries that had been imposed on us.

Inkatha relied on membership fees, and our members were among the poorest of the poor. Yet we took pride in raising the funds to send some of our young women leaders, including Mrs Eileen ka Nkosi Shandu and Ms Thoko Zungu, to study community savings and cooperatives at St Francis Xavier University, in Canada.

When they returned, they used their knowledge, ploughing into our communities the skills, enthusiasm, and endurance needed to see development come from the ground up. This has always been the character of IFP women. Whenever we empower women to change their circumstances, they reach out and change the circumstances of others.
This is why it is said that when you educate a man, you educate an individual; but when you educate a woman, you educate a nation. There is always a ripple effect when women are linked into the IFP. Good things happen, and many people benefit. In today’s South Africa, women of goodwill are still drawn to the IFP, recognising in our Party a vehicle through which they can make their contribution and fulfil their passion to make a difference.

I marvel at all that today’s women endure. There is unfathomable pressure on women to provide for their families in an economy that still favours men, to respect themselves in a culture that often devalues women, to survive abuse and gender based violence, to trust and build relationships under the constant threat of becoming a victim, and to express their talents when the doors of opportunity seldom seem open.

I know that we have come a long way since 1975. Political enfranchisement and a democratic Constitution have brought with them the immutable reality of equal rights. The voice of women is clearly heard throughout our country, in every sphere of influence. But until our daughters live without fear, and until our society values women as intrinsically worthy of respect, legislation will be limited in what it can achieve.

Today, I want to praise our young women who are staying in school and pursuing an education.

I want to praise our grandmothers who are raising their grandchildren, and even raising orphans not from their own family.

I want to praise the women who are caring for the ill, the impoverished, and distressed, who are walking alongside their wounded sisters and helping them heal.

I want to thank the daughters who show respect for their parents.

I want to honour the wives who are faithful partners, and the women who diligently work, even for minimum wage, to support their families.

I want, above all, to thank the women who mobilise support for the IFP and draw their sisters into a political home in which women are valued.

There are many who are fighting a good fight, not just for themselves but for the benefit of those around them. I applaud each and every one of these women, and I thank them for making a home in the IFP.

For forty years you have been the backbone of our Party. As we celebrate together, let us look for those whose spirits are flagging, and encourage them anew. Let us revive the spirit of self-help and self-reliance; the spirit of the women of 1975. Together we have walked a journey of resilience. May the road ahead see IFP women leading from the front.