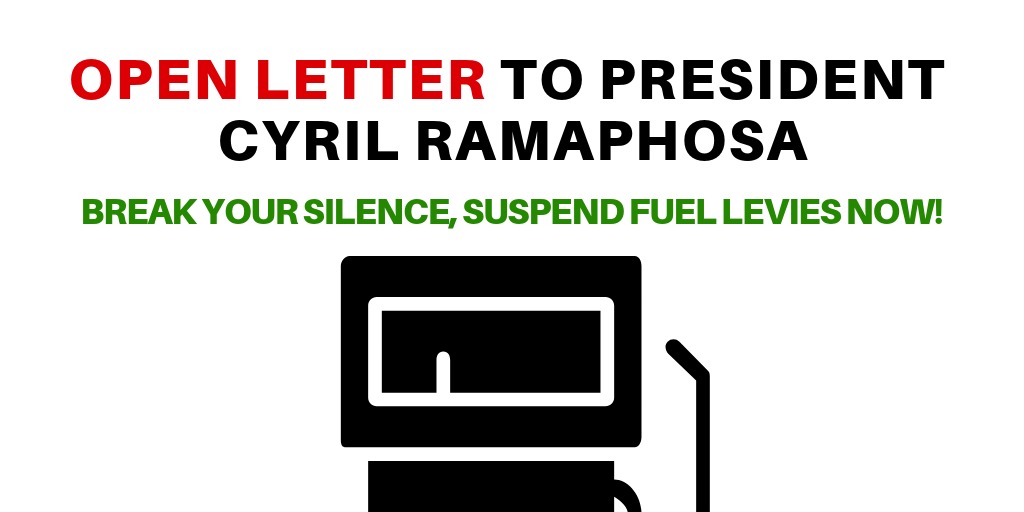 The promise of your presidency which swept throughout the country upon your election was seen as a dream of hope and prosperity, with many dubbing it the “New Dawn”, but in reality it has been nothing short of pain and struggle for the majority of South Africans.

The more things change, the more they stay the same.

Mr President, your silence on the escalating fuel prices is deafening.

In April a VAT increase of 1% was put in effect, and on top of that the fuel levy was also increased by 52 cents.

As I write to you the fuel price stands at its highest without any hope in sight that the situation will improve in the immediate future; yet there is nothing coming from you Sir.

The economy is not growing, unemployment is rising, taxes have increased across the board and salaries have not increased significantly to make up for the now 7th increase in the fuel price.

Mr President may I remind you that the ANC, on 16 September 1993 in a statement titled “ANC demands suspension of petrol price increase” said the following:

“The ill-considered and uncaring decision to increase the petrol price only confirms the NP government does not have the interests of the majority of South Africans, who are poor and struggling desperately to make ends meet, at heart. If the government persists in pressing ahead with these indefensible price hikes, they will be inviting a similar reaction to that when VAT was increased. Now is the time for them to establish the tradition of a government that cares for and consults with its citizens”.

Obviously, one man’s meat is another man’s poison.

In that letter I put it to you Sir that:

“I [therefore] write to you Sir out of serious concern that in absence of solutions or a comprehensive relief package these prevailing fuel price hikes will have an adverse and deleterious effect not only on the South African economy at large but on the general welfare of South Africans as they struggle to sustain their livelihoods.
It is Citizens who will ultimately bear the brutal brunt of the increase of costs to business who will simply pass on such costs to an already overstretched consumer.”

With every increase it is the poorest of the poor who are hit hardest further widening the inequality gap. South Africa has thus become the most unequal country in the world with a Gini Co-Efficient of 0.95.

In South Africa R3.37 in tax, excluding the RAF Levy, is added to each litre of petrol, 165% more than a decade ago.

Mr President, whilst we are not in control of global prices of fuel, we are in control of the taxes and levies we charge per litre and to continue charging these taxes on the backs of the poor your government is complicit in the oppression of the very people it is mandated to serve.

The fuel levies of R5.30 must be suspended as a matter of urgency, until global prices of fuel have stabilised, to give relief to the majority of South Africans.