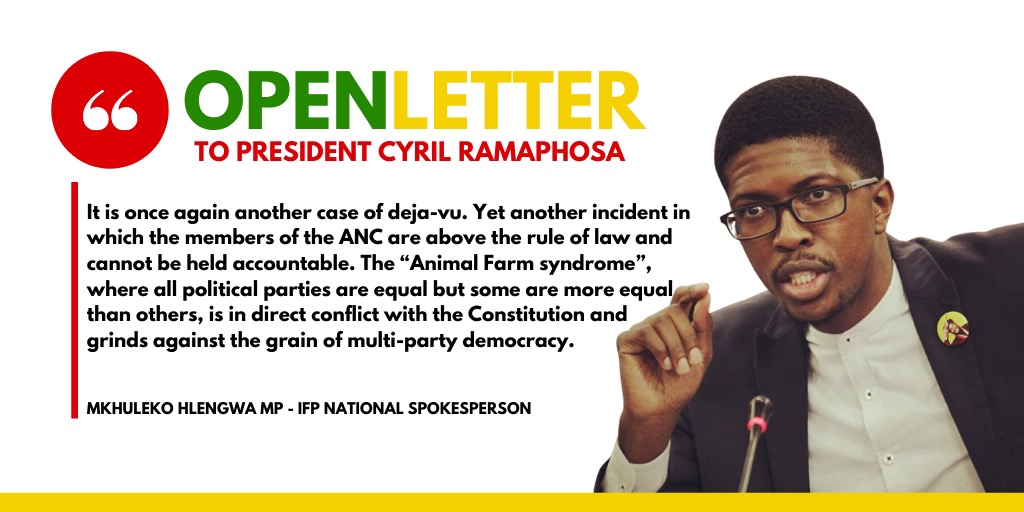 I trust that this letter will reach you in good health and is read in the spirit of strengthening our Constitutional Democracy and in fostering stronger relationships with countries on our continent, in particular, our neighbours, Zimbabwe.

At the outset, I do not wish to call into question the noble attempts to act as the ANC in engaging with your sister-party the ZANU-PF in trying to find solutions to the myriad of issues plaguing the Zimbabwean people, and its government, led by the ZANU-PF and President Emmerson Mnangagwa.

However, I wish to indicate that it is well understood by many in the international and diplomatic community, that the South African government’s attempts at quiet diplomacy have failed the causes of human rights and the rule of law for the people of Zimbabwe. It only succeeded in finding a solution for political parties to work together, in a deal brokered by Former President Thabo Mbeki.

This is further evidenced by the fact that your envoys, Ms Baleka Mbete and Dr Sydney Mufamadi, came back from Zimbabwe empty-handed.

It must be expressed that the issues facing the Zimbabwean people are to be adopted in the same spirit as those of our own country. Their problems are South African problems. The movement of our neighbours seeking refuge and greener pastures in our country, due to heightened political tensions, human rights violations and general economic collapse, is cause enough for us to act decisively as a country, but also to intervene through our strategic position in SADC and the African Union.

South Africa’s role in ensuring that stability, democracy and human rights prevail on the African continent is a priority par none. Moreover, this priority becomes a true reality for our neighbouring countries in Southern Africa and at the foot of our doorsteps.

Restoring the dignity and ensuring that the rule of law and universal human rights of all citizens of Zimbabwe are protected, defended and upheld is critical to the success of our collective project. We have a responsibility to fight against any forms of human rights abuses, as we well know the depth of injustice and crimes committed against humanity during Apartheid, and now in post-Apartheid South Africa.

We must not, therefore, allow the very real issues regarding Zimbabwe to be compromised or overshadowed by reckless and irresponsible ANC behaviour here at home, through the abuse of state resources, more so, without consequences.

Mr President, the ANC’s reimbursement of the costs to the State for a trip, on a SANDF plane, across our borders during a National State of Disaster, and in direct contravention of our National Lockdown regulations, clearly sends a message to the public that the ANC and the State are inseparable.

Reimbursement, due to public pressure, solves only part of the problem.

The fundamental constitutional crisis of conflating Party and State does not require a financial solution; it requires bold Presidential leadership to effect consequence management and stern Presidential reprimand to set the tone that such is totally unacceptable and inconsistent with the Constitution which by and large you, Mr President, midwifed for our democracy!

It is once again another case of deja-vu. Yet another incident in which the members of the ANC are above the rule of law and cannot be held accountable. The “Animal Farm syndrome”, where all political parties are equal but some are more equal than others, is in direct conflict with the Constitution and grinds against the grain of multi-party democracy.

The continued conflation of Party and State breaks down our democracy, and all of our efforts in maintaining the rule of law and clamping down on corruption in our own country.

The only plausible explanation is that it is the ANC’s National Executive Committee – of which you form part – that decided to send a delegation of ANC members along with the Minister of Defence, Nosiviwe Mapisa-Nqakula, using State-funded resources; as up to now it is not clear why the bilateral meetings of both the ANC/ZANU-PF or that of the Ministers of Defence were not held virtually.

The official government trip was properly timed to coincide with the ANC delegation trip; and it was you, Mr President, who approved the Minister’s trip, whilst also being party to the ANC decision to dispatch a delegation at the same time. The irony and synchronisation of events cannot be lost. The conditions for a perfect storm were created.

Mr President, in any normal and functional democracy, our Defence Minister would have stepped down by now, following yet another blunder on her part.

It is public knowledge that this is not the first time that Minister Mapisa-Nqakula has transgressed and conflated her role and duties to the State with that of her political party, the ANC; or even for personal matters.

Whilst we welcome your commissioning an explanation from the Minister, which must be made public in the interest of transparency; I put it to you, Mr President, that no explanation given by the Minster regarding the “lift” she gave to the ANC can ever justify the continued and deliberate failure to separate Party and State. The coincidence of the trip is too glaring to peg it as a “lift”.

Therefore, when the facts of the matter are so obvious, to propose further investigations would amount to obfuscation or kicking for touch to avoid acting.

A serious wrong has happened. The ANC has admitted to it; and will #PayBackTheMoney. The question becomes, will Government act? The ball is in your court, Mr President.

Mr President, I wish to highlight the greater dilemma which your inaction on this matter will set forth and cement: that is that the precedent will be set for all and any further transgressions.

I further wish to remind you of your promises upon which you were elected to office; that was on the basis of being ‘a new broom to sweep clean’ the wrongs of the past and to usher in a new era, post the decade of State Capture under our former President.

South Africans want to support you in taking bold and decisive action – and further, to set an example in which you have called upon us all to join you in action through doing what is right.

Your Presidency will be measured in accordance with your own loyalty to the cause, “Thuma Mina”, which you have inspired others to follow.

This scandal places you, Mr President, in the dock, as president of the ANC and of our country.

Inaction on your part would aid and abet the continued entrenchment of corruption in our national body politic. It would erase the line you have drawn in the sand.

So we must not take lightly the significance of this issue. It resurrects so many scandals of the past.

Mr President, in your various capacities, but more importantly, as a South African, we ask of you that you do what is right for our country, not for your party.