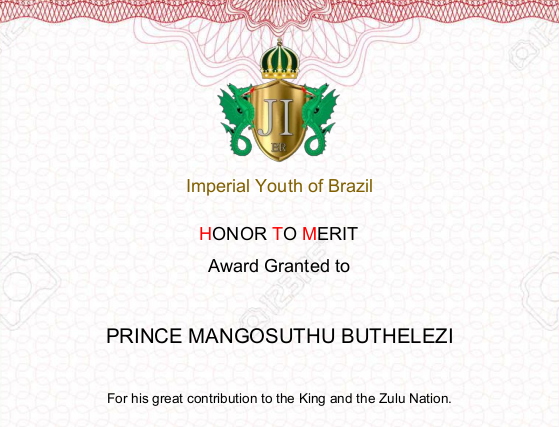 The IFP Youth Brigade is proud to congratulate the Founder and President Emeritus of the Inkatha Freedom Party, Prince Mangosuthu Buthelezi MP, on receiving the Honor of Merit Award from the Imperial Youth of Brazil for his service to the late King of the Zulu Nation and to the Zulu Nation itself.

This Award has been bestowed in appreciation of Prince Buthelezi’s fight for the recognition of the institution of the monarchy. Not only did Prince Buthelezi serve His Majesty King Goodwill Zwelithini ka Bhekuzulu for almost half a century, he also served the late King’s father, King Cyprian Bhekuzulu, as traditional Prime Minister to the Zulu Monarch and Nation.

During negotiations towards democracy in the early nineties, Prince Buthelezi risked his political career for the sake of ensuring a role for the monarchy in our democratic dispensation. As young activists and patriots, the youth of the IFP are grateful to our Party’s Founder for giving us the example of integrity and commitment to principle.

The IFP Youth Brigade thanks the Imperial Youth of Brazil for recognising Prince Buthelezi’s legacy and for honouring him in this way. We share their respect for the Royal Houses of South Africa and for Royal Houses throughout the world, recognising that the institution of the monarchy is able to play a pivotal role in securing social justice.