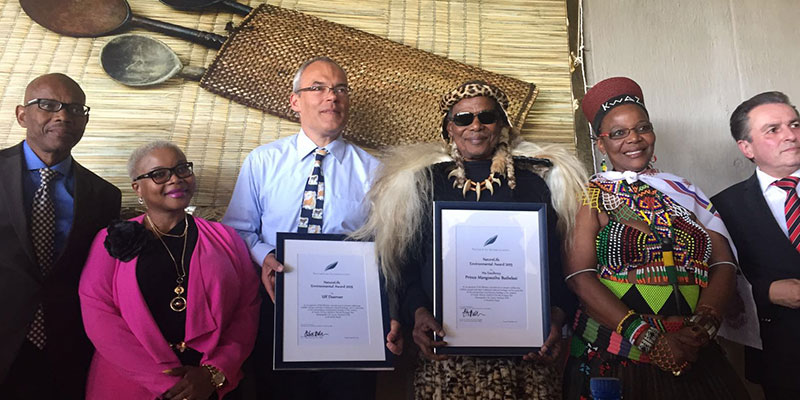 What a pleasure it is to have my old friend, Mr Ulf Doerner, accepting this award with me. I must thank him for travelling with Dr Claus Peter-Hutter and Mr Axel Kleinschumacher all the way from Germany, so that we could celebrate past victories in the journey of conservation. It is indeed fitting that next month commemorates 20 years since the announcement by South Africa’s Government that it would not mine the eastern shore of St Lucia. A long and difficult battle had been won. It was battle whose international support was led by Mr Doerner.

The fight for conservation in South Africa owes a great debt of gratitude to this man, not only for working so hard to preserve our precious wetlands, but for keeping our conservation issues in the global spotlight. I have been honoured to work side by side with Mr Doerner for many years, and feel more honoured still to call him a friend.

The fight for St Lucia began when I was Chief Minister of the erstwhile KwaZulu Government, and KwaZulu was administered by the IFP. It was a cause that naturally seized my attention, for I had been a conservationist for several decades, long before it was fashionable. I remember, in fact, that when I first began urging people to consider our natural heritage as a finite resource, I was somewhat ridiculed.

I had been approached in the 1950s by a young park ranger by the name of Ian Player, together with an equally young Mr Nick Steele and Mr Hugh Dent. They came to me as the Head of the large Buthelezi Clan, asking me to explain conservation to my people so they might accept the need to set aside land specifically for wild animals. This was far from easy, for my people were living under the oppression of apartheid and land was a contentious issue.

But I managed to convince our communities in Hlabisa and Mtubatuba that preserving our natural heritage was a worthy long-term goal, and they accepted the establishment of “the Corridor” between Umfolozi Game Reserve and the Hluhluwe Game Reserve. I learned then that people must be the cornerstone of any conservation effort. Unless conservation is made relevant to ordinary people, it has no hope of gaining their support.

I had caught the passion of Dr Player, Mr Steele and Mr Dent, and I was now wholly committed to protecting the environment.

My love for nature increased as I spent time at Mtwazi Lodge in Hluhluwe. Dr Player had become Senior Conservator in the Natal Parks Board and he arranged for my family and I to spend long weekends at the Lodge. It was an unprecedented act, for at that time the apartheid government maintained game reserves as the exclusive playground of whites.

Now, some four decades later, I remember those weekends in the bush as slices of heaven. Since then I have hardly taken a single day’s rest. It remains one of the very few regrets of my life that I didn’t continue taking these holidays, particularly after 1994 when my responsibilities as a national Minister weighed heavy on my shoulders.

It never took me long to unwind when I entered a game reserve. But my fondest memory remains a trip to St Lucia, where I spent a few hours out on the water. That experience was uniquely refreshing. It is not surprising then that when the fight to preserve St Lucia began, I found myself at the forefront.

For years I had been persecuted by the National Party Government which tried to force me to take the great game reserves of Zululand, Hluhluwe/Mfolozi, Ndumo and others, and turn them into agricultural holdings. I said then, and I still maintain, that the game reserves of KwaZulu Natal are our heritage and as such are beyond price.

I reaffirmed these convictions at the Conference of Game Conservation
International held in the 1970s in San Antonio, Texas in the United States, where I appeared before an international audience at a very difficult time in our history. I knew then that we were not only caretaking for our own future, but for all the people of the world who could experience in our reserves the breathtaking bounty of nature.

Over the years, I have had many opportunities to express my passion for conservation. In 1982, as Chief Minister of KwaZulu, I established the KwaZulu Bureau of Natural Resources, which later became South Africa’s first Department of Nature Conservation. I founded the Tembe Elephant Park on the border of KwaZulu Natal and Mozambique. I became Trustee of the Wilderness Leadership School, founded by Dr Ian Player and Magqubu Ntombela, and became patron of the Magqubu Ntombela Foundation and President of the Rhino and Elephant Foundation of Southern Africa which sadly became defunct because of lack of funding.

In doing these things, I believe I am continuing the work of the founder of the Zulu nation, King Shaka kaSenzangakhona, who protected game and wildlands long before the white man came. What is today Mfolozi and Hluhluwe Game Reserves were protected areas under King Shaka’s reign. In colonial times, and even to this day, were it not for the Zulu game scouts protecting the game reserves, nothing would have survived the commercial poachers.

It is fitting then that we gather today in the heart of the Valley of the Kings. Umgungundlovu was the capital of the Zulu kingdom during the reign of King Dingane, brother to King Shaka. It was King Cetshwayo, the nephew of King Shaka under whom my great grandfather Inkosi Mnyamana kaNqengelele Buthelezi served as traditional Prime Minister to the Zulu Nation.

This is not the first time I have been honoured by Germany for my conservation efforts. In 1998, I travelled to Frankfurt to receive the Bruno H. Schubert Stiftung Environmental Award. But I must say, as much as I enjoy visiting Germany, it is wonderful to have my German friends visit our beautiful country to witness for themselves the splendour that we work to protect.

My only regret is that their visit coincides with one of the worst droughts we have seen for many years. This has wrought terrible hardship on our land, our people and our animals, threatening food security for countless families. I have lost some of my own cattle to this drought, as have many subsistence farmers. Even commercial farmers are struggling, and some have had to sell up and leave the land. As we celebrate the victory we won in St Lucia twenty years ago, livestock in St Lucia are facing death.

Even on the shoestring budget afforded us by the apartheid government, my administration poured resources into disaster management and focussed on developing agriculture. We knew how to plan for droughts, and we did what needed to be done. I am relieved to know that the IFP has again taken over the administration of St Lucia, for we recently won a by-election that put us back at the helm in the Big Five Municipality.

We will work hard to mitigate the effects of the present drought, in St Lucia and elsewhere. I know we are not working alone, for there are exceptional men and women from all walks of life who are fighting for our environment. I think of people like Mr Andrew Zaloumis of the Greater St Lucia Wetland Park, Dr Andrew Venter of the Wildlands Conservation Trust, Dr Andrew Muir of the Wilderness Foundation, Ms Sheila Berry of the iMfolozi Community Wilderness Alliance, the good people at Ezemvelo KZN Wildlife, and many more.

We all walk in the footsteps of giants, like Sir Laurens van der Post, Dr Ian Player, Nick Steele, Hugh Dent, David Rattray, Lawrence Anthony and Magqubu Ntombela. Because of the passion and sacrifice of these individuals, we have an inheritance to protect.

Twenty years ago, Mr Doerner and I, together with thousands upon thousands of activists, won a victory for St Lucia. We stood firm on a matter of principle and triumphed in what is remembered as the greatest conservation battle of the century. Today, Mr Doerner and I still stand firm in the war for conservation. We have many allies, including our friends at NatureLife International. But the challenges we are up against are far greater in number and immediate consequence.

Too much of our natural heritage has already been lost and we are leaving our children with less diversity and more endangered species than we ever imagined. Because of this, I will keep working as a conservationist for however long is left to me, and I will keep expressing my gratitude to those who will maintain this fight long after I am gone.

I wish to thank our friends at NatureLife International for considering me worthy of this award. I receive it with both humility and pride. Humility because I am one among many who have made their mark for conservation, and pride for the very same reason. I am proud to belong to the global community of conservationists.

Danke, meine Freunde. I thank you.