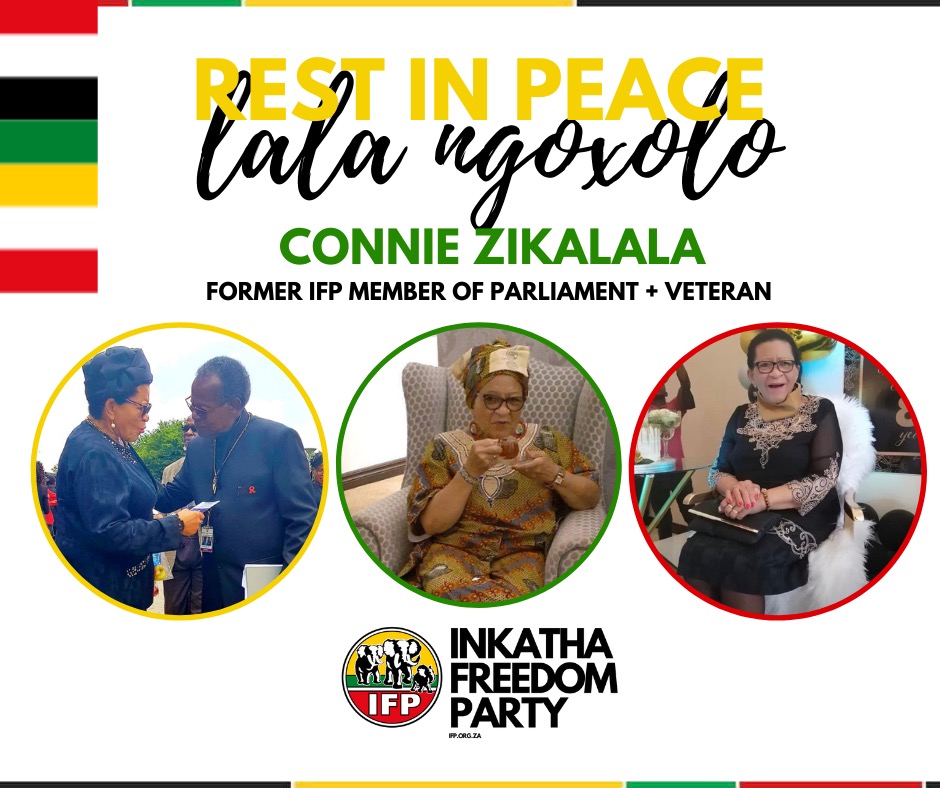 “The Lord is my shepherd; I shall not want.”

The IFP has received with sadness the news of the passing of its stalwart and veteran Mrs Constance Ntombikayise Zerish (CNZ) MaNyembe Zikalala (81) yesterday evening after a short illness.

Mam’ Zikalala was a loyal and disciplined member and leader of the IFP from 1975 when Inkatha YeNkululeko YeSizwe (IYY) was founded.

She was one of the first members of Inkatha and was its torchbearer in then Transvaal Province working hand-in-glove with the likes of the late Mr Gibson Thula to establish Inkatha.

Sis Connie, as she was affectionately known by her contemporaries, also represented the then Madadeni Constituency in the erstwhile of KwaZulu Legislative Assembly.

Her passion for women development saw her take up an instrumental role in the founding of the IFP Women’s Brigade in 1977.

Mrs Zikalala, a teacher by profession, has lived a life of servant leadership always availing herself for the greater good of the people in all the roles she played in the Party and as a Member of Parliament from 2009 to 2014.

At the time of her passing Mam’ Zikalala was serving in the IFP National Council (previously known as the Central Committee), the Party’s highest decision-making body in between conferences, where she was always of sober mind, clear argument and a voice of reason. She was a mature bridge builder and unifier.

In her long service in the Party she amongst others held the following positions:

She transcended party divisions and was part of the glue that kept the party together.
In the IFP she was a leader, mentor, mother, disciplinarian and friend to everyone.

At the height of the low intensity black-on-black ANC/IFP violence she showed her mettle and working with the late Mrs Bertha Gxowa of the ANC, they brought together the women of the two organizations to quell the violence.

The IFP mourns a tried and tested leader of the struggle and democracy who at all material times demonstrated total and uncompromising loyalty to the political ideals of the IFP; and supported the noble vision and historic mission of her leader Prince Mangosuthu Buthelezi until her last breathe.

The IFP extends its sincerest condolences and warmest sympathies to the Zikalala and Nyembe families on the passing of this great woman leader of our land.
She is survived by her children Thabani, Mbuso, Lindiwe and Nonhlanhla and 10 grandchildren; whom we thank for sharing this remarkable woman with us. Today we share in their pain!

A woman of faith, MaNyembe began all her prayers by citing Psalm 23:1 “The Lord is my shepherd; I shall not want.”
In this hour of grief as we mourn her passing we draw strength from her faith and favorite Psalm.