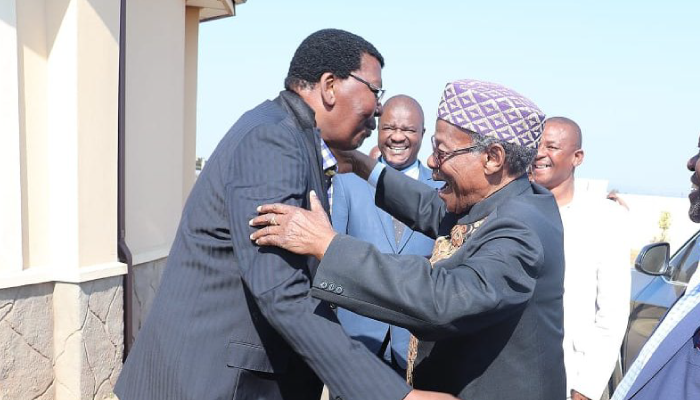 I am honoured this afternoon to say a few words at the request of Dr Bonginkosi Meshack Radebe, as we celebrate his 70th birthday. Dr Radebe has asked me to speak on behalf of fathers, knowing that his own father was my great supporter and feeling – as he said – that I have been like a father to many.

When he told me this, I must say, I was quite humbled, for it is rare that someone so steeped in politics can speak well about the opposition!

I can only quote Dr Radebe himself to explain this. When asked recently where he stands on some matter of controversy, Dr Radebe said (and I quote): “Having just taken early retirement from politics, I am now not afraid of speaking my mind… I have my own home and cattle and I depend on no one for a living.”

What a remarkably free space to be in, at this stage of life! I cannot imagine a birthday present that exceeds the value of simple freedom to speak and to do as one pleases.

Of course, I know that such freedom is wholly contained within the prescripts of what one considers morally good and right. When you can say anything, what you do say somehow matters a great deal.

I cannot imagine, for instance, Dr Radebe speaking against conservation – although he is quite free to do so – because, like me, Dr Radebe has experienced the joy of proclaiming protected areas. Through his work as MEC for Agriculture and Environmental Affairs, he has come to understand the link between being a conservationist and being a father.

When one becomes a father, the need to create a legacy happens quite spontaneously. You look at your children and you realise that everything you do from this moment forward will have an impact on their lives.

They will eat the fruits of your labour long after you are gone. If you fail to toil as you ought, they will go hungry. And if you teach them to toil as well, you will ensure food for the next generation, and the one thereafter. That is the beginning of a legacy.

Thus one tries to teach one’s children to do the right thing, to know right from wrong, and to make a difference in the world.

Dr Radebe’s father taught him many things, but one of the greatest lessons he imparted was the belief that one cannot be satisfied with being well-fed, while those around you are starving.

This lesson served him well when Dr Radebe became MEC for Social Development here in KwaZulu Natal. He served from a place of true humanity, not because it was his job, but because that’s the way he was raised.

Another lesson his father taught him was self-help and self-reliance. This philosophy was a cornerstone of Inkatha during the liberation struggle and it remains a foundational part of our message. Dr Radebe’s father found resonance in this philosophy, realising that the hardship of our people could not – and would not – be changed by handouts. We needed to teach people to stand on their own two feet, so that we would have the dignity of being autonomous, even under oppression.

I saw this lesson lived out by Dr Radebe when he began speaking about subsistence farming and urging people to grow their own food. In this very practical way, the labour of parents would feed their children, and families would flourish.

The third lesson his father taught him, for which I am deeply grateful, is the lesson of reconciliation. During the brutal People’s War that raged in our country in the late eighties and early nineties, brother was pitted against brother. There was a great deal of bloodshed particularly here in this Province and in what was then known as the Witwatersrand.

In Hammarsdale, black-on-black violence was rife and while several attempts had been made to restore peace, they had failed. The leadership of the ANC-in-exile then commissioned Mr Meshack Radebe as its representative, and Inkatha commissioned Mr Sipho Mlaba. The peace they negotiated was recognised with the awarding of a doctorate to Mr Radebe by the University of Natal.

I cannot pay tribute to Dr Radebe without mentioning this important aspect of history. Our two parties knew at that point that the crisis of violence needed to be overcome, and the only hope was the normalising of political relations. I feel that we are somehow seeing history repeated, for our country is again in crisis. It is not a crisis of violence, but an economic crisis.

One of the signs that we are entering a crisis as a country was the warning that was issued by the National Treasury’s Director-General, Dondo Mogajane last week. He stated that what was needed was a 10 percent salary cut for all public servants simply to cover the cost of state-owned enterprises’ bailouts thus far. “National Treasury’s box is empty,” he said. “Growth is not coming through and tax revenues are not there. We are in trouble.” He then added that the 10 percent wage cuts scenario was unlikely. He went on to say: “Realistically, it is not something we can approve and it’s not really possible, but there are no holy cows and we have to make tough decisions. We need to avoid a situation where everything collapses.” He went on to say that the government needed to be open to borrowing from multilateral institutions. He went on to say; “We should not be afraid to go to the BRICS bank (the new Development Bank or NDB), the African Development Bank (AFDB) and the World Bank and say, “Let us diversify our debt portfolio.”

I think we should wake up and sit up when Treasury predicts a situation where everything collapses.

The constant bailouts and our dependency on borrowing is creating a crisis that business cannot solve. Unemployment is growing and poverty deepening. In a situation like this, the normalising of political relations, particularly in this Province, becomes urgent once again. We believe in a strong multi-party democracy, but we also know that we need to prioritise the present crisis over political differences.

It is for this reason that the IFP still seeks reconciliation with the ANC, even now, 25 years into democracy.

I am humbled to know that Dr Radebe’s father supported me the way he did. Like his son, he was blessed with longevity. Now that Dr Radebe is entering what I call the period of grace, beyond man’s allotted three score and ten, I encourage him to enjoy the bonanza. It is by the grace of God Almighty that we continue in strength.

Friends; I believe Dr Radebe’s father would be proud of his son. I can’t help but think of the words of Charles Kettering, who said, “Every man should remember that one day his son will follow his example, not his advice.” Charles Kettering knew quite a bit about shaping the future. His invention of the first self-starting ignition changed the trajectory of automobiles.

Just seventeen years before I was born, Kettering’s ignition was installed in a Cadillac, and suddenly cars no longer needed to be cranked up by hand in order to start.

I’m afraid I’m giving away my age. But Dr Radebe will see as he gets older that life is often marked by the fundamental changes we experience, whether it’s the external change of a new invention, or the personal change of becoming a father, starting a job, or retiring.

As Dr Radebe reaches this milestone, I felt that at the birthday of a leader of Dr Radebe’s status, when both representatives of the parties that were in the forefront of the ANC’s People’s War, I need to issue the warning to both the ANC and the IFP that as our country is fast moving into a crisis which might end with this country which is endowed with so much, may end up as a basket case, as we have seen in some countries in our Continent, we need to put our political differences aside and see whether we cannot all prioritise what we need to do together to survive this imminent crisis

In this new season of Dr Radebe’s life, the presence of so many family members and friends speaks of genuine wealth. One can be rich, or one can be wealthy. The latter is far more preferable. This then is what I wish for Dr Radebe; that he will always be surrounded by family and friends.

Dr Rabede; we wish you a happy birthday!