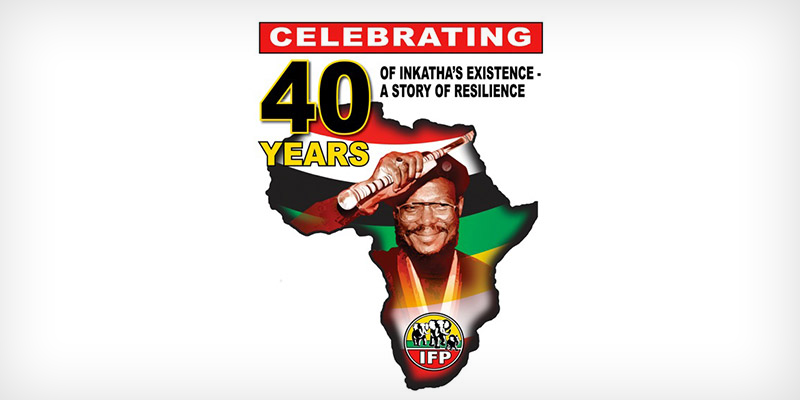 Leaders in the Church, including the Bishop of the Diocese of Zululand of the Anglican Church of Southern Africa, the Right Reverend Dino Gabriel, our former Bishop, Bishop Lawrence Zulu, the Reverend BK Dludla and the Reverend J Donda;
Members of the Zulu Royal Family and Amakhosi; our former Ambassadors, His Excellency Dr FT Mdlalose and His Excellency Dr VT Zulu;
Leaders and representatives of political parties, including the Hon. Mr IS Mfundisi of the UCDP, the Hon. Mr Steve Swart of the ACDP, Mr Bongani Msomi of the UDM, and Councillor Bikrum Bharat Sing of the Minority Front;
Programme Director, Mr MZ Khumalo;
leaders and members of the IFP; honoured guests;
brothers and sisters in Christ.

How wonderful it was to experience a thanksgiving service in celebration of the IFP’s 40th anniversary. I wish to thank our presiding priests for leading us in worship and prayer, and for guiding us through the sermon to a place of gratitude, humility and jubilation. This is indeed an appropriate response to the Lord’s provision over 40 years.

On 21 March 1975, a group of patriotic men and women gathered here at KwaNzimela to change the course of history. We recognised the hiatus in political mobilisation in our country, following the banning of the ANC, PAC and other political parties. We saw our people somehow adrift, lacking a centre from which to mobilise activism, unity and cohesive resistance.

I was, by that time, leading the KwaZulu Legislative Assembly, having heeded the request of Mr Oliver Tambo and Inkosi Albert Luthuli. We were working through a multi-strategy approach, and my own role was to undermine the system from within. I was a thorn in the flesh of the apartheid government, continually speaking truth to power, quoting Nelson Mandela when it was illegal to do so, and calling for equality, justice and freedom.

My position in the Government of KwaZulu gave me a degree of authority that irked the National Party. They had, for instance, been forced to return my passport, which they had confiscated for nine years after I met with Mr Tambo in London en route to the Anglican Congress in Canada in 1963. They couldn’t very well justify a leader in government being denied a passport!

Once it was returned to me, I used that passport often, meeting with Mr Tambo in London, Mangoche, Nairobi, Lagos and Stockholm. I travelled to the Vatican and met with Pope Paul VI. I travelled to the United States, the United Kingdom, Germany and other countries, seeking support from world leaders for our liberation struggle.

I also visited Zambia and Tanzania, to thank President Kenneth Kaunda and President Julius Nyerere for giving sanctuary to our exiles from all political parties and for supporting our struggle for freedom.

It was on one of these trips, to Zambia, that President Kenneth Kaunda gave me some good advice. He expressed his appreciation and that of other SADDAC Heads of State for my vociferous opposition in South Africa. But he said that, in order to be a cohesive force, I should set up a membership-based organisation to reignite unity and mobilisation among our oppressed majority.

When I returned home, I immediately canvassed the views of Bishop Alphaeus Zulu and Mr Oliver Tambo. Both agreed with President Kaunda’s advice. It was Bishop Zulu who suggested the name Inkatha, referencing Inkatha ka Zulu, the Zulu National Congress founded by my uncle, King Solomon ka Dinuzulu, in 1928.

He based his advice on our Lord’s injunction that we “be as wise as serpents and as meek as doves”. He said that by emphasising the cultural aspect, we would not attract the attention of the apartheid regime.

I must just say, when Bishop Zulu was elected Bishop of Zululand in 1966 – the first black bishop of the Anglican Church – I remember telling the Sunday Tribune, “God will provide a way for the new bishop.” Now, as my friend and mentor encouraged me to form Inkatha, I held fast to the belief that God would provide a way for this new organisation.

Thus it was that Inkatha yeNkululeko yeSizwe was born, here at KwaNzimela Diocesan Centre, exactly forty years ago. It was born as a national cultural liberation movement for all blacks, anywhere in South Africa. We wrote its Constitution based on the Constitution of Dr Kenneth Kaunda’s Party, UNIP.

That inaugural conference elected its President, and I took the helm with a sense of gravity and hope. His Majesty the King spoke of the need for absolute unity. I echoed that call, and then – with what we now know was perfect foresight – I exhorted our founding members not to be daunted by the efforts of sabotage we would no doubt face.

“On this score, we have no illusions of any sort,” I said. But our goal, I explained, was not “political liberation only, but also its corollaries which are economic liberation and the freedom one can get from proper education.”

Bishop Zulu compared what we were doing to Nehemiah, who held his weapon in one hand while building the city walls with the other.

Looking back now, I thank God for the foundation that was laid that day. Inkatha never deviated from the principles we placed at the heart of our organisation; the very principles of the 1912 founding fathers of Africa’s oldest liberation movement, the African National Native Congress. That is, unity, inclusivity, passive resistance, equality, integrity, negotiations and freedom.

I will not recount today the many trials and tragedies we have faced over forty years. Neither will I mention the specific victories we have seen, and the great moments of jubilation. These memories will be recounted many times in 2015 at various events we have planned to celebrate our 40th anniversary. Today, I wish to focus our thoughts merely on the fact of our existence, four decades after our founding Conference at KwaNzimela.

How many times in the past 40 years has the obituary of the IFP been written?

From the very first attack by the ANC’s General Secretary Mr Alfred Nzo in June 1980, to the latest column of Hogarth in this week’s Sunday Times, we have faced a constant onslaught from various directions. But Inkatha was never “swept away onto the rubbish heap of history”. We never compromised under the bullying of Minister Jimmy Kruger. We were never destroyed by the endless ammunition ranged against us. And we never succumbed to despair, the lure of power, or the temptation to swear off reconciliation.

Inkatha endured. Not merely as a grouping of people under one name; but as a concept, as a political entity and as part of South Africa’s historical landscape. We did not change our ideology or abandon our principles. We have endured as a cohesive organisation, still pursuing freedom in all its forms; political, economic and social. For this – for the longevity of the IFP – I give thanks to the Lord God Almighty. It is surely by His design, by His grace and by His strengthening.

I am grateful for the opportunity again to express my gratitude for all God’s servants, of all different denominations, who have prayed for us over the years.

Some have gone on to be with the Lord, and some are still with us. We are grateful for all their prayers.

It is poignant to share today’s celebration with individuals like our Programme Director, Mr MZ Khumalo, who was the founding General Secretary of Administration all those years ago, and who has faithfully served our Party for many years, even now into his retirement. When I see among us, still, the faces of people who took those first steps with Inkatha 40 years ago, I feel tremendously blessed.

Then, when I look around at the portraits of our past leaders, leaders who have gone before us into eternity, I am grateful all over again. Hundreds of thousands of remarkable men and women have given their allegiance to the IFP over the last 40 years, and millions of ordinary patriots have found a home amongst us.

Many have settled in its branches. Let us keep nurturing that faith and sow more seeds, so that we may have – both metaphorically and practically – many more branches.

Friends; there was a hymn we used to sing in Inkatha during the darkest times of the People’s War when our loved ones were falling to violence. We sang, “The Lord is with you wherever you go, in all vicissitudes…” I feel that is a theme of the past 40 years, for the Lord has indeed been with us. We have been reminded time and again of the wisdom of Proverbs 3 verses 5 and 6: “Trust in the Lord with all your heart, and lean not on your own understanding; in all your ways acknowledge Him, and He shall direct your paths.”

There is another hymn that comes to mind specifically for today’s celebration.

It was authored by Samuel Collett in 1763, and is titled, “Through all the various shifting scenes…” I would like today to read the 6th verse as I close my remarks –

“All things on earth, and all in heaven

On thy eternal will depend;

And all for greater good were given,

And all shall in thy glory end.”

We give thanks today for 40 years in the service of our nation.