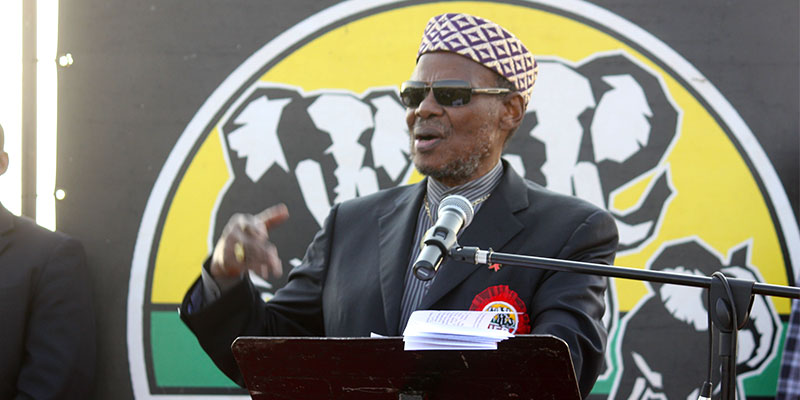 What a pleasure it is to come to Bhuchanana to celebrate with you. I want to thank Inkosi Biyela for inviting me to visit you again, so that we can celebrate the strengthening of a partnership between the IFP and this community. You have spoken and we have heard: the IFP is here to serve.

When I came to Bhuchanana in July, we were preparing for a by-election in Ward 5. I came to speak to you about that by-election, in order to arm you with the truth and the facts, so that you could make an informed decision when you went to the polls.

We talked openly with one another about giving your allegiance to people who are working hard to earn it, and taking your allegiance away from those who are failing We discussed how by-elections are an opportunity to hire, fire, and change the game, well ahead of Local Government Elections. They’re about you and what you deserve in terms of service delivery and political representation. I also warned you to be vigilant against those who are willing to manipulate the vote, and use fraud, bribes and all manner of tricks to influence the outcome, rather than allowing your voice to be heard. Our goal in July was to safeguard democracy in Bhuchanana.

I am pleased to say; “We did it!” Because of you, democracy prevailed and a good electoral outcome was secured. I was very impressed by the voter turnout in Bhuchanana. It is evident that the people here are patriots, rightly determined to influence governance and shape your own future. I feel honoured to be among South Africans who don’t just talk about democracy, but act to protect it.

In fact, voter turnout here was far higher than in any other by-election held across South Africa. You were sending a clear message. Let us look together at what voters said in Bhuchanana.

At every single voting station, except one, votes for the IFP increased. This is wonderful. And it’s made more significant by the fact that votes for both the ANC and NFP decreased at every single voting station. The ANC lost 437 votes as compared to 2011. The NFP lost 232 votes. This is a combined loss of 669 votes. The total number of votes by which the IFP increased was 573.

It is thus abundantly clear that the IFP actively, and quite effectively, took votes away from both the ANC and NFP. We didn’t just win. We won a wholesale victory. The IFP took Ward 5 with enthusiasm, leaving no doubt in anyone’s mind about your party of choice in Bhuchanana.

I want to thank you for coming out to vote, and for voting IFP. I want to thank you for thinking about this by-election and what it would mean for this community to see the IFP strengthened. Your vote made a huge difference. We have good reason to celebrate today, for together we have changed the game in Bhuchanana. We have secured hope for the future.

I appreciate your vigilance at the voting stations. You protected the integrity of this by-election and ensured that it was free and fair. Thank you. I think this has given you a good idea of what is needed in 2016, when the next Local Government Election is held. The stakes will be high in 2016, and our opponents will no doubt try to take Bhuchanana by any means. We need to be ready. We need to go into that election fully prepared to be protectors of democracy.

I therefore urge you not to sit back now and rest on the victory we achieved in July. This is the time to up our game and increase our activism in branches, on the streets and everywhere we go, speaking about the IFP, and speaking about the need to arrest a downward spiral in KwaZulu Natal, by restoring to government the party that is able to deliver.

This is the time to capitalise on our victory. I encourage you to become increasingly active and involved. Join a branch of the IFP, or mobilise support and start a new IFP branch. Volunteer now to become a party agent in the 2016 elections, so that you will be trained and well prepared when South Africa goes to the polls. Take the initiative, and strengthen the IFP more and more, so that we will be a formidable opponent, regardless of what may come.

The IFP has been working hard to prepare for 2016. In the next few weeks, Parliament will have Questions to the President, in which parties can pose questions to our Head of State on any matter affecting the country. The IFP intends to ask the President to intervene to remove a very serious threat to free and fair elections. That threat arises from the standard practice of the Electoral Commission in appointing officials from the South African Democratic Teachers’ Union to oversee voting stations.

They do it in every election, placing SADTU officials in charge as Electoral Officers. We all know that SADTU is openly aligned to the ANC and has a vested interest in ensuring an electoral outcome in favour of the ANC. SADTU is politically biased. Yet the IEC sees no problem in giving them positions of authority when it comes to elections.

The IFP has raised this with the IEC many times. In fact, before the 2014 National and Provincial Elections, I wrote to all opposition leaders in Parliament and we launched a joint petition which the IFP hand delivered to the IEC, calling on them to stop appointing SADTU officials as electoral officers. Last month, a new Chairperson was appointed to the IEC, and again I wrote a detailed letter to him describing the various threats to free and fair elections, which must be resolved if we are to protect democracy.

Thus far, despite everything we have done, the 2016 elections are not yet secure. I look forward to hearing the President’s response when we ask him to intervene.

These are issues we are tackling at national level, for the sake of all South Africans. At local level, here, where democracy plays out every day in service delivery, decision making and governance, there is much that can be done to secure democracy. The best way for you to make your contribution is by actively campaigning for the IFP.

You have made it clear that you are champions of democracy. You are shaping your own future. This is why the IFP is your natural home. The people of goodwill have always been drawn to the IFP, for this is the party that delivers, speaks the truth, and works for you.

Thank you for your overwhelming support. Let’s make 2016 another victory!