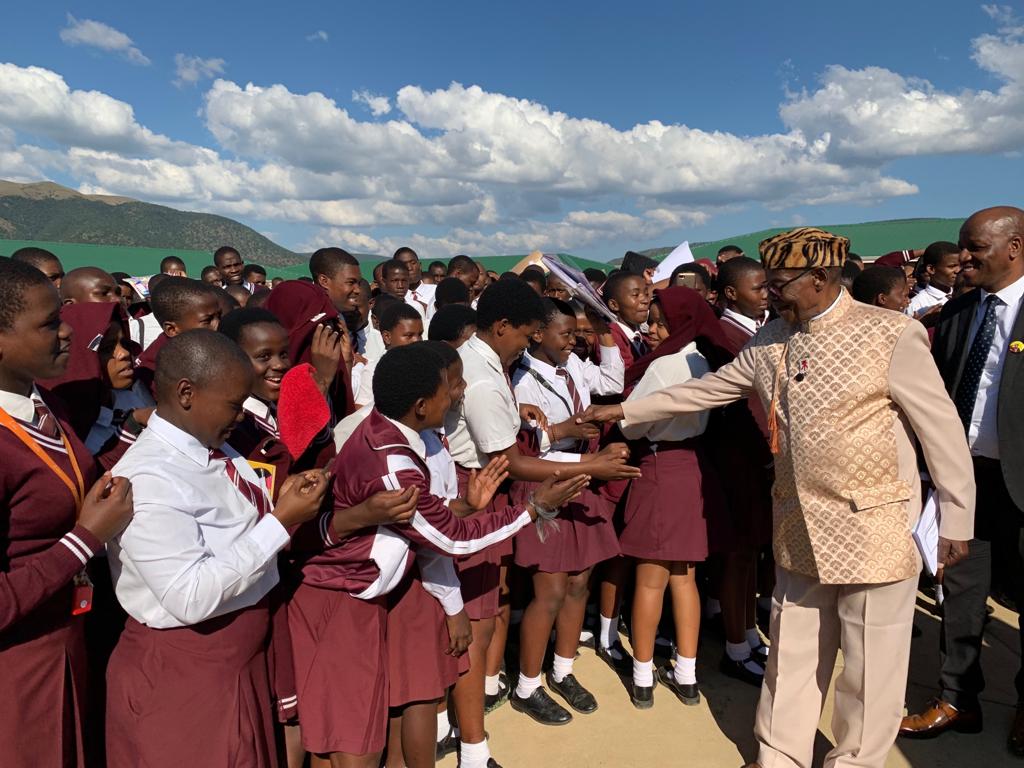 Good morning and thank you for welcoming me to Bizimali High School. I am excited to have the chance to visit you this morning, because I have heard so much about Bizimali.

This school has an exceptional reputation, not just in Nkandla, but throughout South Africa. I know that learners come here, even from as far afield as Mamelodi, because this school has a reputation for producing excellence. Not because of cutting edge facilities and expensive equipment, but because of the dedicated teachers and strong leadership of your principal, Mr Ntuli.

So I wanted to come here myself to thank the teaching staff for what you are doing, and to encourage all of you to keep learning, keep growing and keep preparing for the future. As I do this I want to acknowledge the pain still felt at Bizimali at the loss of Miss Sisanda Dhlomo, your Accounting teacher. When a teacher is so well-loved, it is clear that they were fulfilling a calling, not just doing a job.

To me, teaching is a calling. I remember my favourite teachers, both from school and university. I remember in particular my law professor, Professor ZK Mathews, who used to explain things by relating a story. If I were to tell you a story today, it would be the story of how South Africa discovered the power of our youth.

I am sure you know about June 16th 1976. On that day, 43 years ago, 20 000 children walked out of their classrooms in Soweto, to converge on Orlando Stadium. They were protesting against the imposition of Afrikaans as the language of instruction in black schools.

The apartheid government had not anticipated this response. The police hadn’t anticipated it. Even the families of those youths had not expected such a show of political power from the youngest members of their households.

The learners planned and organised their protest in secret. They didn’t tell their teachers or their parents. And yet, on the day, their number swelled to 20 000. I have often wondered, what made those children realise they had power? How did they become aware of the power they held to influence politics?

Throughout the history of mankind, the deepest, most profound and most lasting changes have been instigated by the youth. This tells me two things. Firstly, that young people don’t accept the status quo without wondering how they can challenge it – which is good. Secondly, it tells me that every young person has a destiny.

So, is youth just a waiting-room for destiny? No. I believe there is a specific purpose for every life that can only be fulfilled right now – while you are young. You may very well have a great destiny, but you also have a purpose for right now. And most likely, fulfilling your purpose will set you on the path towards your destiny.

I want to lay down a challenge. I challenge you to find your purpose for right now. Like the youth of 1976, ask yourself what you can do to influence your circumstances. You may feel helpless, but the truth is, you have power.

For some of you in Grades 11 and 12, the chance to exercise your power is coming very soon. Twelve days from now there is going to be an election. It will decide who runs our country and who governs our provinces. If you are 18 years old and have registered to vote, you will have the chance to exercise the greatest power democracy gives – the power to choose your own leaders.

This is so important. Think about why you came to Bizimali; because the leadership here is good. If we can get good leaders for our province and our country, we can create the conditions for greatness. We can turn the whole of South Africa into a place that nurtures potential and produces excellence.

For 21 years I used to speak to graduates of the University of Zululand, because I served as Chancellor. As I handed them their degrees at the end of their studies, I used to tell them to keep moving forward. Don’t think that you’ve arrived when you finish school, or when you finish university. Keep working, keep pushing, keep exercising your power to create something better.

I was appointed as Chancellor of the University of Zululand because of the support I gave that institution when it was just starting out. In those days, some people called the University an “apartheid bush college”. They laughed at us for trying to grow something better in the midst of darkness. But the King and I, and also amakhosi, supported this, because we understood that education was a formidable weapon in the fight for freedom.

That is why I worked so hard to prioritise education during apartheid. As Chief Minister of the erstwhile KwaZulu Government, I made sure that the tiny budget we received from the national government was used wisely. I made sure that education came first. I partnered with amakhosi to raise funds for schools, matching those funds Rand for Rand, until we had enough to build. I also partnered with people like Swami Sahajananda of the Divine Life Society and philanthropists like the Lockhat brothers.

In this way we built more than 6 000 classrooms across KwaZulu. It was an amazing achievement in the midst of apartheid. In those classrooms, teachers were teaching and students were learning. We were equipping a generation of youth for the future South Africa we fought to inherit.

Sadly, this wasn’t happening everywhere in South Africa. The ANC’s leaders in exile felt that the best way to achieve freedom was to make our country ungovernable. They called on learners to abandon their classrooms and burn down their schools, under the banner, “Liberation Now, Education Later”.

Through Inkatha, which would become the IFP, we raised a different banner. We said, “Education For Liberation”. In fact, we taught an extra subject in schools in KwaZulu. It was called Good Citizenship. It equipped youth to become advocates of social justice, because they understood the system. It equipped them to use their power for good.

Today, many of South Africa’s administrators, lawyers, academics, business people, doctors and journalists can trace their education back to the schools I built in KwaZulu. When we achieved democracy, they were ready to transform our country through their skills and ethical leadership.

That is a fantastic legacy. It’s the kind of legacy I am still pursuing, because I still see the need for young people to be equipped, not just for today, but for tomorrow. It pains me to see matric students unable to access tertiary education, for lack of funds. Almost every day I receive emails from students who are deeply in debt and are struggling to finish their studies. Worse still are the graduates who have completed their studies, but still can’t find work.

There is something fundamentally wrong in our country. Our economy has not been protected. The future of our youth has not been prioritised. The leadership we have in a democratic South Africa is failing to deliver on its promises. This is largely because corruption was allowed to fester. But is also speaks of wrong principles and a flawed understanding of how to build success.

We need to change this. We need to put in place a leadership of integrity, wisdom and long-term vision. We need leaders who will value the power of our youth, and who will work to open doors so that you can create your own destiny.

On May the 8th, I will be voting for change. I hope that the teachers and learners of Bizimali will cast your vote too; for good leadership and the right priorities. Here in Nkandla the electorate has chosen the IFP, because the IFP has a proven track record of good governance and honest leadership. We have earned your trust.

I look forward to taking our partnership further, because I believe that with good leadership, the youth of South Africa can build a great future.