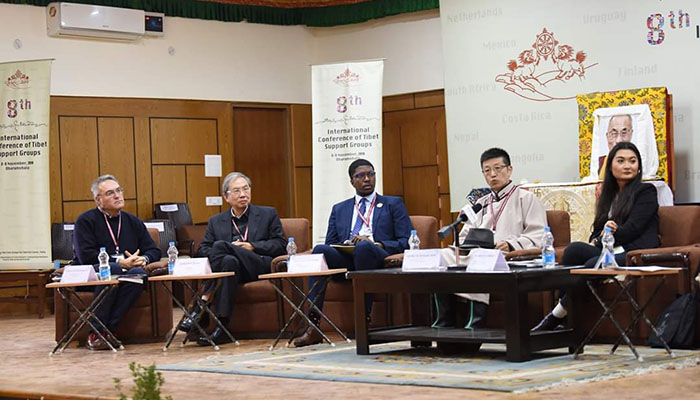 ADDRESS BY THE HON. MR MKHULEKO HLENGWA MP
IFP NATIONAL SPOKESPERSON, REPUBLIC OF SOUTH AFRICA
AT THE 8TH INTERNATIONAL CONFERENCE OF TIBET SUPPORT GROUPS
CONVENED BY
THE CORE GROUP FOR THE TIBETAN CAUSE, INDIA –
AND FACILITATED BY
THE DEPARTMENT OF INFORMATION AND INTERNATIONAL RELATIONS OF THE CENTRAL TIBETAN ADMINISTRATION

I am here as a friend of peace, justice and freedom. I am a child of South Africa and a friend of Tibet.

The cause for freedom in Tibet is a cause that must be carried by all who believe in the principles of liberty, equality, human rights and democracy. I learned years ago from my leader, Prince Mangosuthu Buthelezi, that a threat to freedom anywhere, is a threat to freedom everywhere.

I am therefore honoured to participate in this conference of Tibet Support Groups on behalf of my party, the Inkatha Freedom Party. The IFP champions constitutional democracy in South Africa, and we serve the values of democracy everywhere.

Our support for the Tibetan cause was born out of a long friendship between our leader, Prince Buthelezi, and His Holiness the Dalai Lama. Prince Buthelezi fought against apartheid in South Africa and was among the protagonists who won democracy for our country. He served for ten years in a democratic government, having been appointed as Minister of Home Affairs by President Nelson Mandela and President Thabo Mbeki.

The Prince founded the Inkatha Freedom Party, 44 years ago, as a centre of political mobilisation towards freedom. After leading the IFP for all these years, he now serves in an advisory capacity as President Emeritus of the IFP. But he remains a Member of Parliament, and in that capacity he still actively champions the Tibetan cause.

He has charged us the younger generation in the Party to take up the Tibetan cause in South Africa. This is a charge we accept for we believe in its worth.

Prince Buthelezi has participated in several of the World Parliamentarians Conventions on Tibet, and when he was not able to attend he sent our senior IFP Members of Parliament to add our voice and our support.

Unfortunately, because South Africa was engaged in a national election in May this year, we were not able to attend the Convention in Latvia. We felt it very important therefore that the IFP participate in this Conference.

I want to thank the National Convener of the Core Group for the Tibetan Cause, in India, for extending an invitation to us. This is a valuable opportunity for us to consider the deteriorating human rights situation in Tibet, and to share our expertise so that we might design a coordinated and strategic response.

I must say, I was honoured to meet the President of the Central Tibetan Administration, His Excellency Dr Lobsang Sangay, in South Africa last year. Dr Sangay was visiting our country for the first time, at the invitation of Prince Buthelezi and the IFP. It was wonderful to show him South Africa’s Parliament and to introduce him to our MPs who are sharing the fight for Tibetan freedom.

The IFP hopes to have the pleasure of hosting the Honourable Mr Pema Jungney, the Speaker of the Tibetan Parliament-in-exile, during next year’s State of the Nation Address and the opening of our Parliament.

I wish I could say that South Africa as a whole is as committed to the cause of Tibet as we are in the IFP. Sadly, over the past decade the South African Government has denied His Holiness the Dalai Lama entry into our country 3 times, for which Prince Buthelezi took them to court. Our people don’t have access to the truth about Tibet.

I believe the South African government acted unconstitutionally when it denied a visa to His Holiness the Dalai Lama, preventing him from visiting South Africa.

We have not seen His Holiness on South African soil for more than a decade.

The IFP believes that all people have a right to hear him and to freely associate with him. I am ashamed of my Government for bowing to pressure from China.

How many know that Tibet is the least free region in the world, after Syria? How many know of China’s exploitation of Tibet’s mineral resources that is polluting land, water and air? How many know of the self-immolations of desperate people dying for lack of freedom?

Tibet is more than twice the size of South Africa, and the Central Tibetan Administration represents the aspirations of some 6 million people. When we talk about Tibet, we are talking about the global struggle for democracy, freedom and peace. The reality is that the international community supported South Africa’s struggle for freedom; now it must support that struggle for Tibet. We are grateful for the invitation to learn how we can further our support in this struggle.

Equally our voice must be heard in support of those who seek freedom or peace or democracy or independence in Hong Kong, Taiwan, Western Sahara, Syria or Venezuela and everywhere else around the World.

We also remain committed to the pursuit and realisation of the Two-State Solution insofar the Israel-Palestine question is concerned.

And we stand opposed to the annexation of Crimea.

The voices of the free and liberated must be heard speaking for those who are oppressed; for their oppression is our oppression and their freedom our commitment.

Our silence is music in the ears of the oppressor.

This therefore calls for heightened Global Action in all spaces and platforms where we speak and where we have influence. The culmination of our collective efforts will move our course in the right direction.

Long before Prince Buthelezi personally met His Holiness the Dalai Lama, he admired the commitment of His Holiness to non-violence as a means of conflict resolution. The IFP paid a high price for maintaining this principle during South Africa’s liberation struggle. We were accused of being puppets of the apartheid regime because we refused to take up arms and engage violence against our oppressors.

It was deeply encouraging to know that leaders of the calibre of the Dalai Lama, and the Mahatma Gandhi, agreed with our approach.

When His Holiness finally visited South Africa in August 1996, and again in December 1999, Prince Buthelezi had the privilege of approving his visa, for he was serving as the Minister of Home Affairs in our democratic government.

As the Minister he was also able to intervene in 1997 to enable the Office of Tibet to open in Pretoria, South Africa, from which Tibetan representatives could (and still do) engage with South Africa’s political leadership, as well as with our citizens. This has kept the Tibetan cause visible in our country.

Our discussions, as the IFP, with His Holiness both inside and outside South Africa, notably at the World Parliamentarians’ Conventions on Tibet in Edinburgh and Rome, were focussed around the need to further the cause of human rights internationally.

We must therefore continue to openly call for China to recognise Tibet’s unique cultural identity, to adhere to international standards of human rights, to be willing to engage in diplomatic negotiations, and to accept autonomy for Tibet.

We must speak out against China’s exploitation of Tibet’s natural resources, which is causing environmental degradation, and their attempt to assimilate Tibetans which is destroying a cultural heritage.

I believe that every free individual and nation has a responsibility to promote the freedom of all. The mere fact that human rights abuses continue, anywhere, in a world that embraces democracy and freedom, should concern us all.

Our experience, in South Africa, under apartheid of activists ‘going missing’, never to be heard from again, has heightened my sensitivity to this particular atrocity against human rights. The IFP therefore supports the continuous call by human rights organisations throughout the world for the release of Gendun Choekyi Nyima, recognised as the Panchen Lama in May 1995 by His Holiness the Dalai Lama.

The Panchen Lama is considered to be youngest political prisoner in the world, having been taken into so-called protective custody by China when he was just 6 years old. If he is indeed in protective custody, that should have ended when he turned 18. Why was the UN Committee on the Rights of the Child consistently denied access to the Panchen Lama? Where is he? He must be released.

For years the IFP has been concerned that African leaders have underestimated the extent of power they are handing to China for the sake of economic support through trade and investment. There is undoubtedly a strategy behind the increased power that China is establishing in Africa. Unfortunately African governments, including our own, have not placed enough emphasis on using trade relations to push the agenda of democratisation and human rights.

I have always understood that China has an important role to play in world politics, a role that is becoming increasingly influential. But I also hope that China will reach a point where the need for internal democratisation will be a prerequisite for continued prominence and international influence.

What could the Tibetan people in general and the Tibetan leadership in particular learn from South African freedom struggle?

Your struggle is not just about Tibet, just as our own struggle against oppression was not just about South Africa. Our shared cause is for freedom and human rights everywhere. Every person has a right to their identity, culture, security and liberty, simply by virtue of being human.

One of the central lessons of South Africa’s struggle is the importance of negotiation. I believe negotiations were, and still are, the only path to freedom. It is tragic that violence ever became a political strategy.

When Prince Buthelezi met with Dr Sangay in Cape Town in February last year, this is what he told him –

When the disenfranchised people of South Africa stood against an apartheid regime, we were the poor and downtrodden, standing against overwhelming military, economic and political power. But ultimately, the cause of liberation prevailed.”

The fact that we were able to overcome suggests that victory is possible, even against the greatest odds.

By granting Tibet the limited and reasonable autonomy the Middle Way approach advocates, China would bequeath on the world the legacy of a successful nonviolent struggle, which will inform how present and future conflicts may be resolved. Conversely, the failure of the Tibetan cause may discredit nonviolence forever.

We must build and maintain a global network of mobilization to make more and more people aware of the ongoing human rights’ violations in Tibet. In South Africa we are considering the tabling a proposal for a formal Parliamentary network recognizing and interacting with the Tibetan Government-in-Exile. One of the main purposes of such an initiative should be that of providing on-going mobilization and awareness promotion in respect of human rights’ violations.

In conclusion, I feel that the greatest challenge before us is that of bringing the Tibetan cause back within the mainstream of attention, mobilization and commitment of democratic governments, universities, action groups, NGOs and churches worldwide, in the same way we did with the struggle against apartheid.

During the Rome Congress, His Holiness the Dalai Lama pointed out that no one has anything to gain politically from promoting the Tibetan issue. That is true, and in that lies the beauty of us all being here today. The cause of Tibet is a matter of principle.

We are here today also to use the Tibetan cause as an occasion in which we wish to reaffirm that we shall not allow, on this or on any other occasion, any departure from those fundamental values and principles which inspired our struggle for liberation and on which our Republic was forged and founded. In that sense, the cause of Tibet is one of the litmus tests on which the health of global democracy can be assessed.

The IFP is proud to call ourselves Friends of Tibet. We will continue to raise awareness for the cause of Tibet and for peace, freedom and justice for all people, everywhere. 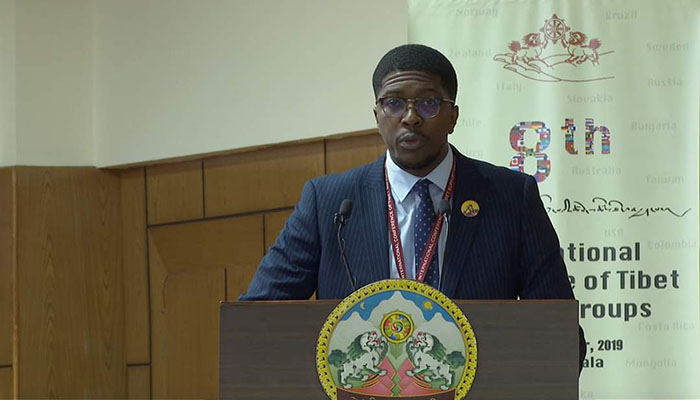