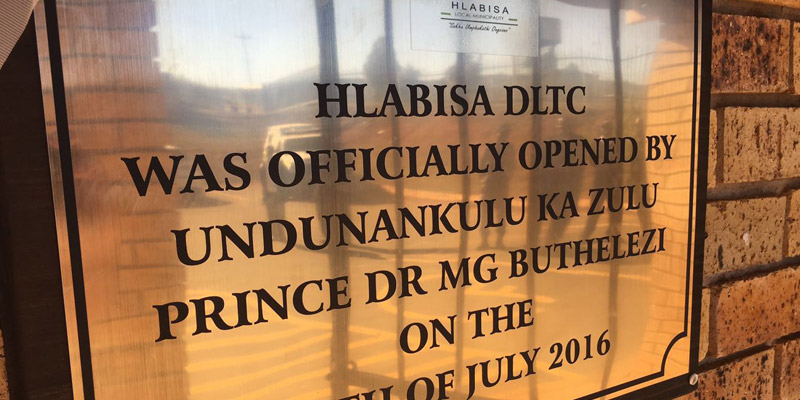 Over the past four decades I have opened countless schools, hospitals and roads. I have handed over houses and inaugurated development projects. I’ve opened community gardens and cut the ribbon at new libraries, sports fields and community centres. Yet I never tire of attending functions like this, because it encourages me that government is working.

I want to thank His Worship the Mayor for inviting me to open Hlabisa Traffic Department and Driving Licence Testing Centre.

Today we also open Siwohlo-Macekeni and Mabhanoyini Roads, and the Nkanjini Electrification Project. So there is good reason for celebration. Today the needs of thousands of people are being met by a municipal leadership that has listened, and acted.

Today’s celebration is not an isolated event. Throughout Hlabisa, the municipality is regularly seen delivering services and improving lives. I know that just yesterday Jabhisa Sports Field was opened, and tomorrow will see the handover of the eNhlanhleni-Madondo Electrification and Paypoint Projects. Earlier this month, the eThembeni Multi-Purpose Centre was opened, as well as Bazaneni Hall. You will have seen clean-up projects and projects to assist with the care of babies and infants.

This is evidence of a municipality that is working. I am proud of this, for Hlabisa Municipality is under the leadership of the IFP. This is a leadership that subscribes to the values of integrity and service. Our councillors live by the ideals of the IFP, and we as a party hold them accountable for serving you. It’s a formula that has worked for 20 years, since the IFP first began administering local government in Hlabisa.

From the first local government election, you chose the IFP. We already had experience of governance, at local, provincial and even national level. The IFP was a known quantity, tried and trusted, and you gave us your mandate to administer the municipality. From day one we worked hard to meet your needs. We listened when you spoke, we respected your voice, and we worked hand in hand with you and your families to create good governance in Hlabisa.

We did it, and we did it well. But our political opponents never stopped trying to take Hlabisa away from the IFP. The politics of local government became heated and ugly, and voters registered their uncertainty in the local government election of 2011. Many promises had been made by our opponents, including the promise by the newly formed NFP that it would provide the strongest opposition to the ANC. The vote was split by the NFP and no one won an outright majority.

Seeing a chance to grab power, the ANC quickly embraced the NFP and they formed a coalition to govern Hlabisa. It was a manipulation of democracy, because the electorate never asked for an ANC government. But that is what you got.

Predictably, that coalition was shaky from the start, and politics immediately took precedence over service in Hlabisa Municipality. IFP councillors found themselves working continually to bring the focus back to your needs. It was an uphill battle, but never once was our partnership with the people diminished. Indeed, the IFP’s partnership with the people of Hlabisa became stronger through this whole saga, because experiencing governance under a different party allowed you to judge the IFP by comparison.

Your verdict was expressed in December 2012, with the first by-election in Hlabisa. You went to the polls and called on the IFP to come back. Through your votes, you restored an IFP leadership in this municipality, and service delivery was immediately back on the agenda. Having gone through this turbulent time, I think every voter understands the importance of choosing the right councillors, backed by the right party.

All municipalities receive funding from National Treasury. But not all municipalities deliver. There are many municipalities throughout South Africa that are failing to perform. We see this from the reports of the Auditor General, from the protests of angry communities, and from the lack of services that too many people endure. It is not a matter of funding. It’s a matter of how those funds are managed, whether there is leadership oversight, and whether corruption is tolerated. In many municipalities, financial mismanagement, weak leadership and corruption ultimately paralyse services. But in Hlabisa, and in every municipality administered by the IFP, there is clean, efficient delivery.

It therefore matters a great deal who is at the helm.

This morning I accompanied His Worship the Mayor and some of our Councillors, as we handed over a house to a destitute family. It was one act of assistance, but it fundamentally improved their lives. It made me think of the many places I have visited throughout South Africa where people have been on the housing waiting list for 18 or 19 years, but still live in dilapidated shacks.

I know that the national Department of Human Settlements is trying to meet all the needs, but the system is somehow flawed. Moreover, because tenders are given to disreputable companies, many RDP houses are already falling apart. Billions of Rands have been spent trying to fix poorly-constructed RDP houses, instead of building new houses for those who are still waiting.

I am therefore proud when I see houses that were built through the IFP. They are still standing years later, and families are still happy to call them home. That is the way it should be. Our country’s Constitution enshrines our basic human rights. But these will never translate from law into reality unless governance is administered by people of integrity.

Fortunately, we are just days away from a Local Government Election. Next Wednesday, voting stations will open across South Africa and voters will speak through the ballot box about local government. With your vote, you will choose the leadership in your local and district municipalities; a leadership that will serve you for the next five years.

It is thus essential that the councillor you choose is someone honest, available and accessible. Someone who believes in servant leadership. Someone who listens and respects you. They need to be backed by a party you can trust, because every councillor subscribes to the values of their party. When you choose an IFP councillor, you are choosing the IFP’s values of integrity, service, participation, respect and hard work. You know what you are getting when you vote IFP.

I hope to see the IFP gain in numbers and support on August 3rd, because I know that the IFP can bring a leadership of integrity back to this province. We have a 41 year track record of clean, efficient governance at every level. We have administered government at national level, in this province, and in many municipalities. We have vast experience. We know what works and what doesn’t, and we know how to bring solutions to the urgent problems besetting our people.

I therefore ask you to support the IFP on August 3rd. Vote for the party you can trust, because the IFP delivers.